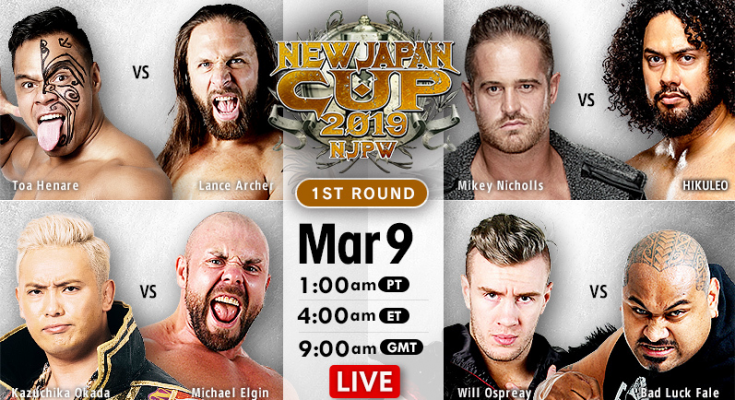 If you missed Night 1 results, they are here.

Chase Owens & IWGP Junior Heavyweight Champion “Bone Soldier” Taiji Ishimori of Bullet Club Tomoaki Honma & YOSHI-HASHI when Owens pinned Honma with a Package Piledriver – Owens and Hashi will meet in Round 2, while Honma was eliminated last night by Taichi. Hashi and Honma worked well against Owens until Honma missed the Kokeshi headbutt. Owens retaliated with the Package Piledriver and got the pin.

After the match, Owens taunted Hashi and slapped him. Ishimori attacked Hashi from behind .

Satoshi Kojima, Toru Yano, & Tomohiro Ishii b. Suzuki-Gun (Minoru Suzuki, Taichi, & Davey Boy Smith Jr.) when Yano pinned Smith with a roll-up – This is the third straight night where Kojima is teaming against Suzuki. They will also meet in Round One, while Taichi and Ishii will meet in Round Two, as will Smith and Yano. In an amazing surprise (not really) Suzuki-Gun attacked before the bell. The heels isolated Ishii and worked him over until Kojima got the hot tag. Again, Kojima hit Suzuki with the Machine Gun Chops, and again Suzuki no-sold them. Kojima escaped the Gotch Piledriver and leveled Suzuki with a lariat. Yano finally got the legal tag, and immediately removed the turnbuckle pad. This gave the heels the opportunity to team up on him. Smith positioned Yano for a powerbomb, but Yano reversed into a pinning combination, and got the surprise pin.

After the match, and enraged Smith pummeled Yano.

EVIL & Shingo Takagi of Los Ingobernables De Japon b. Zack Sabre Jr. & Taka Michinoku of Suzuki-Gun when Takagi pinned Michinoku with a Pumping Bomber – Again ZSJ was able to stay on top of the mat game, outwrestling Evil and Takagi. However, Taka didn’t fair as well. Evil and Takagi were able to use teamwork, with Takagi getting the pin after a Pumping Bomber.

IWGP United States Champion Juice Robinson, Hirooki Goto, & Kota Ibushi b. Los Ingobernables De Japon (IWGP Intercontinental Champion Tetsuya Naito, SANADA, & BUSHI) when Robinson pinned Bushi with Pulp Friction – Goto and Sanada began for their respective teams and fought to a stalemate, Ibushi fared well against Naito, but then Juice missed a cannonball, giving LIJ the advantage. They got the heat on Juice, then Goto got the hot tag. Sanada twice evaded the Ushigoroshi. When Juice tried for Pulp Friction, Naito blocked it. The eventual brawl the broke out, with Juice and Bushi left in the ring. A Pulp Friction later and it was over.

Hiroshi Tanahashi, Hiroyoshi Tenzan, Yuji Nagata, & Togi Makabe b. Ryusuke Taguchi, Colt Cabana, Manabu Nakanishi, & Shota Umino when Makabe pinned Nakanishi with a King Kong Knee Drop – Taguchi’s team managed to cut off Tenzan, and took turns hitting Hip Attacks. Tanahashi got Umino in the Boston Crab. Umino escaped and tried his own Crab. Makabe and Nakanishi tagged in for the hossfight portion of the match. Taguchi’s team rallied around Nakanishi and worked at Makabe. Tanahashi’s team did likewise, resulting in a battle that left Nakanishi open to a King Kong Knew drop by Makabe which got the pin

The rest of the show were the tournament matches.

Lance Archer p. Toa Henare with a Blackout – This is the Cup debut for Henare. He took the fight to Archer right off the bat, complete with a dive off the apron and a brawl through the crowd. It was the brawling on the outside that cost him though, as Archer was able to counter and suplex him on the floor for a near countout. Archer did Undertaker’s Old-School rope walk completely from one turnbuckle to the other. Henare made a comeback and hit an impressive looking suplex. Archer countered with a several power moves, but Henare kept kicking out. However, Henare couldn’t build up any additional steam, and fell to a Blackout.

Mikey Nicholls p. Hikuleo(w/Jado) with a Mikebomb – Nicholls held his own early on. Then Jado got the distraction with the kendo stick, which gave Hikuleo the chance to blindside Nicholls and toss him out of the ring. Hikuleo distracted the referee Red Shoes, allowing Jado to attack Nicholls with the kedo stick. Nicholls made a comeback and hit a brainbuster for a two count. Hikuleo dodged a moonsault. Again, he distracted Red Shoes and Jado attacked with the stick. Nicholls wouldn’t stay down, and hit a DVD and seated clothesline. When Hikuleo kicked out, Nicholls followed up and finished off Hikuleo with a Mikebomb (Pop Up Powerbomb).

NEVER Openweight Champion Will Ospreay p. Bad Luck Fale (w/Jado) with a hurricanrana – It was a little funny that Jado did not have to leave. He just stayed at ringside when Fale came out. Ospreay charged immediately after the bell and dropkicked him to jumpstart the match. Like the previous match, Jado distracted Osprey to Fale could knock him to the floor. Fale stalked Ospreay for the next several minutes. Ospreay made his comeback and tried for the Oscutter. Fale pulled Red Shoes in front of him so Ospreay hit Red Shoes instead. The heels tried to double team Ospreay while Red Shoes was down. Instead, Ospreay escaped and smacked both of them with the cane. Fale reversed an Oscutter into a Hand Grenade, only for Ospreay to kick out. Fale went for the kill with the Bad Luck Fall, but Ospreay reversed with a hurricanrana and got the flash pin.

Kazuchika Okada p. Michael Elgin with a Rainmaker – Amazingly, Okada has only had five matches over the course of his two previous Cup Tournaments. Of course, the reason is Okada was usually the IWGP Heavyweight Champion when the tournament takes place. Kevin Kelly also pointed out that Elgin has wrestled Okada on three previous occasions, but has been unable to win. The two sized each other up in the beginning of the match, with neither getting any sustained momentum. In a pretty cool exchange, Okada went for his top rope elbow, but Elgin reversed it into a crossface. After two German Suplexes, Elgin hit a Dragon Suplex and an Elgin Bomb. Okada escaped the Buckle Bomb, and hit one of his own. Okada went for a Rainmaker, but Elgin reversed into his own Rainmaker. So both men effectively hit each other’s finishers. Okada hit the dropkick and again went for the Rainmaker. This time, Elgin reversed into a Pop Up Powerbomb and went back to the crossface. When Okada escaped the two exchanged several reversals and counters. Eventually, Okada hit the Tombstone, and followed up with a Rainmaker for the win.

After the match, the two shook hands and Elgin left. Okada took the mic and cut a promo.