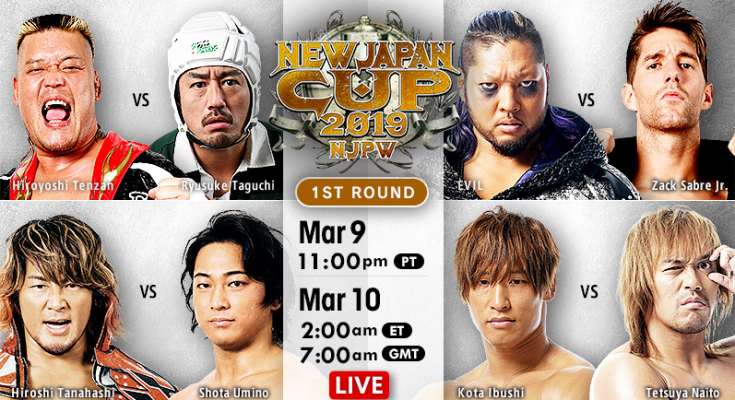 We are now in the second half of Round One in the New Japan Cup tournament.

Minoru Suzuki & Taka Michinoku of Suzuki-Gin b. Satoshi Kojima & Yota Tsuji when Michinoku submitted Tsuji with a crossface – Suzuki and Kojima will meet in their tournament match on the next show. Tsuji started out, and showed a lot of fire. Then he made the mistake of striking Suzuki. This brought about Suzuki’s wrath, and he tossed the Young Lion to the floor and pummeled him through the crowd. Tsuji managed to beat the countout, only to meet Suzuki in the ring. Suzuki taunted Tsuji with his feet. Finally Tsuji was able to regain himself and tag Kojima. Once again, Suzuki laughed off Kojima’s Machine Gun Chops, and once again Kojima caught Suzuki’s Penalty Kick. Taka tagged in and was met with a Koji Cutter. Tsuji made his return and went after Taka. When Tsuji locked Taka in a Boston Crab, Suzuki charged the ring and broke the hold. As Suzuki and Kojima battled, Taka put Tsuji in a crossface and got the submission win.

IWGP United States Champion Juice Robinson, YOSHI-HASHI, Yuji Nagata, & Manabu Nakanishi b. Bullet Club (Bad Luck Fale, Hikuleo, IWGP Juniot Heavyweight Champion Taii Ishimori & Chase Owens) when Robinson pinned Hikuleo with Pulp Friction – Out of these eight men, only Owens and Hashi are still in the tournament. The heels got the heat on Hashi before Nagata got the hot tag. He and Nakanishi cleaned house for a bit before Fale stopped their momentum. Juice got the tag and promptly got sideslammed by Hikuleo. By this time all of Jucie’s allies had been taken out on the floor. Despite the multi-man teaming, Juice was able to fend off the heels and hit the Pulp Friction on Hikuleo for the pin.

Los Ingobernables De Japon (SANADA, BUSHI & Shingo Takagi) b. Hirooki Goto, Tomoaki Honma, & Ren Narita when Takagi pinned Narita with a Pumping Bomber lariat – It’s a little odd that members of CHAOS are mixing up in tag matches with non CHAOS members, while Bullet Club and LIJ are always put on the same side. The babyfaces got the shine by pummeling Bushi, and promptly posed over his downed body. Then Honma missed the Kokeshi, which allowed Bushi to tag in Takagi. The thing about Takagi is that he is a Junior Heavyweight who is still beg enough to believeably stand up to heavyweights. Anyway, the heels got the heat on Honma, until he was finally able to hit the Kokeshi and tag in Goto. Sanada and Goto esccaped each others finishers. A double tag out saw Narita get some offense on Takagi. That didn’t last long though, and Takagi hit the Pumping Bomber for the pin.

Suzuki-Gun (Davey Boy Smith Jr., Lance Archer, & Taichi) b. CHAOS (Toru Yano, Tomohiro Ishii, & NEVER Openweight Champion Will Ospreay) when Smith pinned Yano with a Killer Bomb – Yano looked like he was going to start opposite Archer, but bailed to the floor as soon as the bell rang. Instead, Ishii and taichi started. Then when Taichi tried to escape to the floor, Yano tossed him back in. The heels worked together on Ishii. Ospreay got the hot tag and ran wild on Archer. Ospreay went for an Oscutte, but Archer reversed it into a Full Nelson Slam. Smith and Yano were up next, with Yano doing his signature turnbuckle removing. Smith ducked a turnbuckle shot, and the he and Archer hit the Killer Bomb for a pinfall victory

After the match, Smith took the mic and warned Yano that he would pay “the ultimate price”… Which seems to imply that Smith will physically kill him at the next show.

Colt Cabana, Michael Elgin, & Mikey Nicholls b. Kazuchika Okada, Togi Makabe, & Toa Henare when Nicholls pinned Henare with a Mike Bomb – Henare and Elgin had a fun little hossfight early on. The match went back and forth, with neither team dominating. Henare hit Nicholls with a running Uranage, only for the pin to get broken. Nicholls then hit the Mike Bomb to get the win.

The rest of the matches were all tournament matches

Ryusuku Taguchi p. Hiroyoshi Tenzan with a roll-up – Taguchi is subbing for David Finlay, who is out of action for a few months with an injury. He offered a fistbump, but kicked Tenzan when it was accepted. Tenzan responded by hitting Taguchi with Hip Attacks, and Mongolian Chops to his behind. Tenzan controlled most of the first several minutes. Taguchi reversed the Anaconda Vice into a pinning combination, and followed up with the Ankle Lock. Tenzan hit a top rope headbutt for a near fall. When Tenzan went for the kill, Taguchi rolled him up and got a sudden pin.

After the match, the two did the fist bump, and Taguchi danced around for the crowd.

Hiroshi Tanahashi s. Shota Umino with a Cloverleaf – Umino is the first Young Lion to participate in the Cup. This was likely done to showcase him. A lot of grounded, mat-based wrestling in the first few minutes. Umino briefly got Tanahashi in a Boston Crab, which Tanahashi countered with a Cloverleaf. Umino made the rope break. The pace picked up a bit in the latter part of the match. A missile dropkick got a near fall, so Umino locked in is own Cloverleaf. When Tanahashi broke the hold, Umino resorted to a flurry of strikes, and got a very close near fall. This majorly popped the crowd. However, Tanahashi rallied, and again used the Cloverleaf to get the submission victory.

Zack Sabre Jr. (w/ Taka Michinoku) s. EVIL with an Octopus Hold – Taka did his usual pre-match promo. Evil used his weight and strength advantage, while Sabre relied on his holds. Evil controlled the first half, with Sabre controlling the latter half. Each man countered each other in the final moments, with Sabre reversing Everything Is Evil to an Octopus Hold. A fairly rare submission loss for Evil.

Kota Ibushi p. IWGP Intercontinental Champion Tetsuya Naito with a Kamigoye – It is a little odd to see two top guys in a first round tournament match, but that may have to do with the matches originally meant to be done in the January show in California. Either way, the energy of the crowd made this feel like a real big time event. Naito got the advantage by taking the fight to the floor. He continued to stalk Ibushi in the ring, with Ibushi giving a few signs of life. Naito lifted Ibushi for a top rope super hurricanrana, but Ibushi escaped. That actually wound up being worse for Ibushi, because Naito promptly tombstoned him on the apron. Have I mentioned how tired I am of piledivers on the apron? Anyways Ibushi still managed to reverse out of Destino. Have I mentioned how tired I am of piledrivers on the apron, only for the receiver to be back on offense a minute or two later? Anyways, Naito kicked out of a Last Ride Powerbomb, while Ibushi kicked out of a Destino. In the end, Ibushi hit an Ibushi Driller (scary looking inverted package piledriver), and followed up with a Kamigoye knee strike for the win.

If New Japan keeps with their usual logic, Ibushi will likely get an Intercontinental title shot out of this. Ibushi took the mic and cut a promo, presumably saying he will win the tournament.