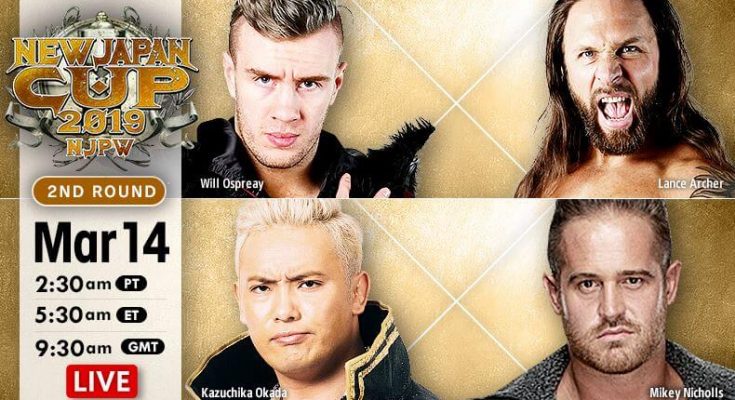 We reach the halfway point of Round two in the New Japan Cup. Kazuchika Okada will take on CHAOS stablemate Mikey Nicholls in the main event.

Yuji Nagata & Manabu Nakanishi b. Michael Elgin & Yota Tsuji when Nagata submitted Nakanishi with the Nagata Lock – Elgin and Nagata began, with neither man getting an advantage. Tsuji did not fare as well. Nakanishi missed a kneedrop, and Tsuji hit an impressive bodyslam. Elgin hit an equally impressive Falcon Arrow for a two count. Both men hit each other with clotheslines for a double down. Tusji and Nagata got the double tag, and Tsuji ran wild for a bit. He put Nagata in a Boston Crab, which Nakanishi tried to break with chops. Surprisingly, Tsuji wouldn’t break the hold. Elgin joined the fight and brawled with Nakanishi on the outside. Meanwhile, in the ring, Nagata rallied and clamped on the Nagata Lock I for the submission.

Bullet Club (Bad Luck Fale, Hikuleo, Chase Owens, & IWGP Junior Heavyweight Champion Taiji Ishimori w/Jado) b. Togi Makabe, Satoshi Kojima, Hiroyoshi Tenzan, & Ren Narita when Owens pinned Narita with the Package Piledriver – Kojima hit Hikuleo with the Machine Gun Chops, and went for his elbow drop early. Hikuleo met him at the top and prevented him from doing it. Tenzan helped Kojima clear the ring. Jado struck Kojima from behind with the cane. This put the momentum with Bullet Club, and they teamed up on Kojima. Owens mocked Kojima’s chops. A Koji Cutter gave Kojima the chance to tag Makabe. A Makabe hot tag never gets old. After running wild, Makabe tagged in Narita. The babyfaces rallied and teamed up on Owens. Narita even locked in a Boston Crab. Ishimori broke that, but then got hit with a 3D. A multi-man brawl broke out, with Owens and Narita left in the ring. A Package Piledriver got the win for Bullet Club.

IWGP Intercontinental Champion Tetsuya Naito & Shingo Takagi of Los Ingobernables De Japon b. Hirooki Goto & Shota Umino when Tagaki pinned Umino with a Pumping Hammer – LIJ toyed with Umino until Goto got the hot tag. Umino tagged back in and hit a missile dropkick for a two count. Takgai tagged in and turned the tide back into LIJ’s favor. A double team and a Pumping Hammer got another near fall. When Umino kicked out, Takagi merely hit another Pumping Hammer to get the win.

Suzuki-Gun (Minoru Suzuki, Davey Boy Smith Jr., & Taichi) b. Los Ingobernables De Japon (EVIL, SANADA, & BUSHI) when Taichi submitted Bushi with a crossface – Suzuki-Gun predictably attacked before the bell to jumpstart the match. Everybody brawled on the floor, complete with using the barricades as weapons. By the time the match got back in the ring, Suzuki-Gun were in control and working over Evil. Sanada got a tag and ran wild with dropkicks and leg whips. A brawl broke out, leaving Bushi and Taichi in the ring. Taichi decked Bushi with a thrust kick, and used a seated crossface for the submission.

After the match, Sanada jumped Suzuki and they had a brawl in the ring. Suzuki took the mic and cut a promo on Sanada.

Kota Ibushi & Tomoaki Honma Zack Sabre Jr. & Taka Michinoku of Suzuki-Gun when Ibushi pinned Michinoku with a Kamigoye – Taka cut his usual promo, but was pretty ineffective against Honma until he dodged a Kokeshi. The heels got the heat on Honma until Ibushi got the tag. Sabre countered an Ibushi moonsault with a submission. Just once, I’d love to hear Mike Tenay call a Zack Sabre Jr. match, just to see how many of the holds he could name. Anyway, now it was Ibushi’s turn to be the babyface in peril. He tried for a Kamigoye, which Sabre prevented. Honma managed to dispose of Sabre, and hit Taka with a top rope Kokeshi. Ibushi followed up with a Kamigoye and got the pin.

IWGP US Champion Juice Robinson, Ryusuke Taguchi, Colt Cabana, & Tomohiro Ishii b. Hiroshi Tanahashi, YOSHI-HASHI, Toru Yano, & Toa Henare when Robinson pinned Henare with Pulp Friction – Again, members of CHAOS were on opposing teams. Cabana and Yano started out, and did comedy with Cabana trying to talk Yano out of removing a turnbuckle pad. Ishii and Hashi paired against each other, and did a lengthy exchange of forearms, which into shoulderblocks. Ishii got the edge, and lead to his team working over Hashi with Hip Attacks. Well his team except Ishii. Tanahashi tagged in and took it to Taguchi. Juice and Henare raded blows. Henare escaped a Pulp Friction , and Tanahashi hit a Twist And Shout. Jucie kicked out of a spear from Henare, and countered with a Pulp Friction to get the pin.

After the match, Chase Owens ambushed Juice and beat him down. He then took the English broadcasting mic and said that Juice had been ducking him. Looks like we will be getting a Robinson/Owens title match in the near future.

NEVER Openweight Champion Will Ospreay Lance Archer – Ospreay is the lone singles champion to make it to the second round. Ospreay took it to Archer off the bat, and Archer had trouble catching him. It wasn’t until the match went to the outside where Archer managed to get his hands on him and toss him to the floor. Archer then threw him around like a rag doll in the ring. Ospreay escaped a Blackout and started his comeback. Archer countered an Oscutter with a shoulderblock that knocked Ospreay clear out to the floor. Archer stayed on the offense and chokeslammed Ospreay on the apron. Ospreay kicked out of a second chokeslam, and escaped another Blackout attempt. Archer kicked out of an Oscutter. Ospreay tried for a Stormbreaker but couldn’t lift him. Archer finally hit a Blackout, which Ospreay kicked out. So both men kicked out of each other’s finisher. Archer positioned Ospreay on the top rope, presumably for another Blackout. Ospreay escaped, and used Archer’s position on the top rope to hit a Stormbreaker.

Kazuchika Okada p. Mikey Nicholls with a Rainmaker – Okada did the clean break in the ropes, but Nicholls slapped him. The two worked a mat based style in the opening minutes. The pace picked up and Nicholls went on the offensive. Okada blocked a Mike Bomb and made his comeback. He hit a Shotgun Dropkick and a top rope elbow. He signaled for the Rainmaker, but Nicholls cut him off. The two went back and forth, hitting and escaping each other’s moves. Nicholls scored several near falls with superplexes and moonsaults. Okada evaded another Mike Bomb, and this time hit the Rainmaker to score the pin.

After the match, the two stablemates shook hands. Okada then took the mic and cut a promo, presumably stating he will win the tournament. As I stated previously, he is my pick top win.