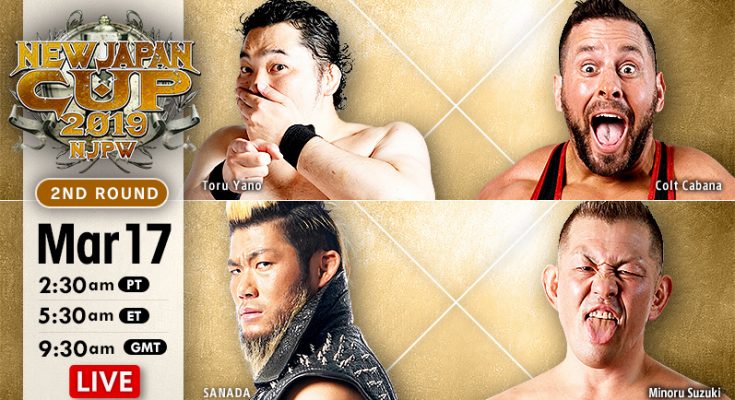 Here is the final night of Round Two action, which will have tournament matches that couldn’t be more polar opposites. Colt Cabana and Toru Yano, who both specialize in comedy, will face off. Meanwhile the every scary Minoru Suzuki will collide with the always impressively athletic SANADA.

Yuji Nagata, Manabu Nakanishi, & Yota Tsuji b. Hiroyoshi Tenzan, Satoshi Kojima, & Yuya Uemera when Nagata submitted Tsuji with a Nagata Lock 2 – Tsuji got a little shine out of the gate as he aggressively went after his opponents. He even slammed Tenzan. Then Kojima cut him off, and the Tencozy side went to work. Nakanishi got the tag and put Tenzan in the Rack. Tenzan hit Nagata with the Machine Gun Chops, but again failed to get to the top rope for his elbow. Nagata countered and put Kojima in the seated armbar. That got broken up by Kojima’s teammates. Kojima looked to be going for the kill when Uemera demanded a tag. Kojima obliged, and Uemera got put Nagata in a Boston Crab. Tsuji broke the submission, and a big brawl broke out. Nagata hit an Exploder and used the Nagata Lock 2 for the submission.

After the match, Nagata stood Uemera up and raised his hand in a sign of respect.

The Bullet Club (Bad Luck Fale, Hikuleo, & Chase Owens w/Jado) b. IWGP US Champion Juice Robinson, Mikey Nicholls, & Ren Narita when Owens pinned Narita with a Package Piledriver – Jado came to the ring brandishing a new shinai after his last one got destroyed yesterday. Owens wanted to start off against Juice, but when Juice obliged, Owens immediately tagged in Fale and left the ring. Juice responded with a plancha to the floor onto Owens. That proved to be a mistake, because Hikuleo struck from behind and smacked him around on the floor. When Juice got helplessly tossed into the ring, Owens immediately tagged in. When Juice tried to defend himself, Owens tagged right out again. The heels got the heat on Juice with Owens only tagging in when Juice was in peril. Narita got the tag, and went after Fale. Owens attacked Narita from behind, only Narita managed to fend him off. In the ensuing brawl, Owens hit Narita with the Package Piledriver for the pin.

After the match, Owens said his title shot will eb on his time, not Juice’s. he then attacked Juice and layed him out in the ring with a beltshot.

Suzuki-Gun (Davey Boy Smith Jr., Lance Archer, & Taichi) b. Togi Makabe, Michael Elgin, & Toa Henare when Taichi submitted Henare with the Holy Emperor’s Crucifix Tomb – Suzuki-Gun must have been in a sporting mood, because they waited until after the bell rang to attack and toss the babyfaces to the floor. They cut off Henare and beat him down, Elgin got the tag and went back and forth with corner elbows. I’ll never understand how somebody can bounce fof the corner turnbuckle like it’s the ropes to deliver a corner attack. Especially when the opponent moves and the guy gets hurt hitting the same type of turnbuckle he just boucned off of with no effect. Anyway, Elgin hit an impressive Falcon Arrow on Archer. The babyfaces rallied and took it to Taichi. Taichi and Henare were left in the ring while everybody brawled on the floor. Taichi decked Henare with a superkick, and applied the Stretch Plum for the submission

Los Ingobernables De Japon (IWGP Intercontinental Champion Tetsuya Naito, EVIL, BUSHI, & Shingo Takagi) b. Kota Ibushi, Roppongi 3K (Sho & Yoh), & Shota Umino when Evil pinned Umino with Everything Is Evil – The faces got the shine at the start, then the heels cut off Sho. Ibushi got the hot tag and ran wild with strikes. Naito managed to ground Ibushi with a spinebuster. Ibushi avoided Darkness Falls and tagged Umino. Evil tried Everything Is Evil, which resulted in the multi-way fight with everybody hitting their big moves. Evil finished off Umino with Everything Is Evil.

When the babyfaces left the ring, Ibushi clearly took a good look at the Intercontinental Belt.

Hiroshi Tanahashi & Tomoaki Honma b. Zack Sabre Jr. & Taka Michinoku of Suzuki-Gun when Tanahashi submitted Michinoku with a Cloverleaf – Both Tanahashi and ZSJ won their second round matches, so they will face off in the quarterfinals in a rematch from last year. They started out the match going back and forth with takedowns. Honma and Taka did likewise until Honma missed a Kokeshi. The heels got the heat on Honma and grounded him with submissions. Tanahashi got the tag but was quickly taken down by Sabre. Honma successfully hit a Kokeshi to break a submission on Tanahashi. All it took then was a Cloverleaf for Tanahashi to get the submission.

After the match, Sabre attacked Honma from behind and ran off.

CHAOS (Hirooki Goto, Tomohiro Ishii, & NEVER Openweight Champion Will Ospreay) b. Kazuchika Okada, YOSHI-HASHI, & Ryusuke Taguchi when Goto pinned Taguchi with a GTR – Again, all but one man in this match are part of CHAOS. Okada’s team managed to cut off Ospreay and triple team him. Okada himself communicated moves to Taguchi via baseball signaling. The all CHAOS team rallied and worked over Taguchi. Okada got the tag and went at it with Ospreay. Hashi and Ishii did the dueling strikes spot. Somehow, Hashi managed to fend off Ishii and Goto. Everybody ht their big moves in the final moments, with using an Ushigoroshi immediately followed with a GTR to pin Taguchi.

And now it’s on to the final two matches of the second round.

Colt Cabana p. Toru Yano with a roll-up – It’s a little hard to imagine Yano or Cabana in a Quarterfinal Match of a 32 man tournament, but that’s exactly what will happen, presuming there are no draws or double DQs. Of course, there was a lot of comedy with Cabana finding tape in Yano’s trunks, and Yano trying to sneak up on Cabana, and getting caught every time. Yano offered Cabana a box of curry as a gift, which Cabana threw into the crowd. Cabana used tape he grabbed and tried to tape the turnbuckle ropes together, preventing Yano from using it as a weapon. Yano removed another turnbuckle and attacked Cabana, who dodged and rolled up Yano for the pin.

After the match, Yano again offered Cabana a box of curry. This time, Cabana did not throw it, and Yano left the ring. It was a GENUINE GIFT. Colt thanked him and left with the box.

SANADA p. Minoru Suzuki with a moonsault – Kevin Kelly summarized the history between the two men. They have faced each other several times over the years in different promotions. Sanada had only been able to get the win once. A lot of mat based wrestling in the opening minutes, with Suzuki getting the upper hand for the first half of the match. he tortured Sanada with leglocks. Sanada fired up and hit a plancha to the outside. Suzuki again went to the ground to slow down the match. Sanada battled back with strikes, which seemed to amuse Suzuki. After nearly making Sanada pass out from the Rear Naked Choke, Suzuki went for the Gotch Piledriver. Sanada reversed and put Suzuki in the Skull End. Sanada went for the win with a moonsault, only for Suzuki to roll out of the way and re-apply a leg grapevine. Sanada reversed into a O’Conner like roll, but Suzuki escaped by going back to the Rear Naked Choke. A TKO got Sanada out of the Choke. Sanada started his comeback and got several near-falls. However, Suzuki caught him on the turnbuckles when he went for a moonsault. Sanada fended off Suzuki, and instead did a backflip and applied the Skull End. The two men kept reversing into their finishers, until Sanada finally managed to hit the moonsault for the pin and the victory.

After the match, Sanada grabbed the mic and cut a rare promo. he stated he loves New York, but not as much as Japan.