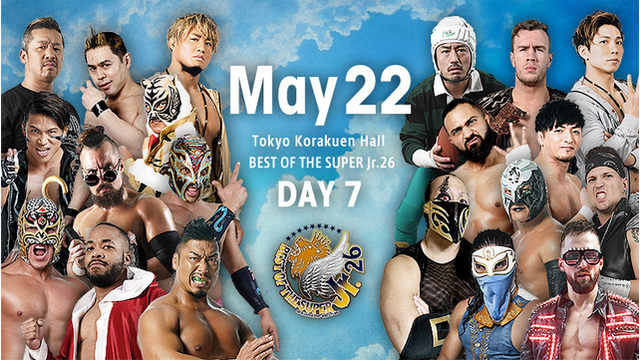 We are not in the middle third of the Best Of Super Juniors Tournament. However, unlike events in the first third, these next few shows will be made up entirely of tournament matches. All entrants in both brackets will compete tonight.

Taiji Ishimori (3-0, 6) p. Taka Michinoku (0-3, 0) with a Bloody Cross – Taka used holds and submissions early on to keep Ishimori grounded. When that didn’t work, Taka started using more strieks. Ishimori made his comeback, and hit the Bloody Cross for the win, and stays undefeated.

Jonathan Gresham (1-2, 2) s. Titan (1-2, 2) with a variation on the Octopus Hold – Another fast paced match with a lot of high flying. Titan used an inverted slam on Gresham that dropped him on the top turnbuckle. A flurry of near falls where not only were both men using roll-ups, but counters as well. Gresham managed to use a submission as a counter to a roll-up, and Titan tapped out.

Yoh (1-2, 2) s. Rocky Romero (1-2, 2) with a Calf Crusher – This was the anticipated match of Coach (Romero) and Student (Yoh) as Roppongi 3K are Romero’s proteges. They matched each other almost move for move in the opening minutes. Rocky got a little momentum, but tweaked his knee on a kneedrop. He missed the Strong Zero, which gave Yoh the opening he needed to make his comeback. Yoh hit a Dragon Screw, followed by a Calf Crusher. Rocky reversed into a Cross Armbreaker. Yoh escaped, but got hit with a Sliced Bread for a two count. Yoh reversed a second attempt, and hit a German Suplex. The two exchanged several reversals and near falls, with Yoh finally getting the submission with the Calf Crusher. Very good match that told the story it needed to.

After the match, Rocky raised his protege’s hand in victory.

The cryptic Radiohead sounding video aired, which irritated Juice Robinson, who was sitting in on commentary.

IWGP Junior Heavyweight Champion Dragon Lee (2-1, 4) p. Tiger Mask IV (2-1, 4) with Desnucadora – Both men started out slow, trying to feel each other out. The match picked up when Tiger reversed a headscissor attempt into a powerbomb. The two battled atop the turnbuckle, which saw Tiger get put in the Tree Of Woe. Lee hit a dropkick to the corner. Tiger reversed another headscissor into a Tombstone, then hit a Tiger Driver for a close two count. Lee battled back with a knee strike, and landed Desnucadora for the pinfall.

BUSHI (0-3, 0) p. DOUKI (1-2, 2) with a MX – The two heels immediately started brawling before the bell. They fought all over the floor and through the crowd. By the time the match got back in the ring, Douki was in control. For the next few minutes, Douki used submissions. Bushi escaped, made his comeback, and hit the MX for the victory.

Yoshinobu Kanemaru (0-3, 0) b. SHO (1-2, 2) via countout – Kanemaru attacked before the bell. Sho quickly battled back, dropkicked him out of the ring, and landed a kick off the apron. They brawled through the crowd with Kanemaru suplexing Sho on the floor. The referee began his count. Kanemaru made his way to ringside. Sho desperately sprinted to beat the count. However, when he made it to ringside, Kanemaru shoved a Young Lion in his way to trip him. Kanemaru then slid in the ring at the 19 count to get the countout win.

Robbie Eagles (2-1, 4) p. Ryusuke Taguchi (3-0, 6) – A mat based beginning quickly picked up into a fast paced high speed exchange. Taguchi stayed on top until Eagles managed to hit his weak point… Taguchi’s ass. Eagles then controlled the next few minutes of the match. Taguchi tried a comeback, but was cut off. Eagles missed a 450, allowing Taguchi to clamp on the Ankle Lock. Eagles managed to reverse into his Turbo Backpack Stunner, but Taguchi kicked out. Eagles then kicked out of a Dodon. The two exchanged several reversals before Eagles tied Taguchi up in a pinning combination.

Shingo Takagi (3-0, 6) p. Marty Scurll (w/Brody King) (2-1, 4) with Last Of The Dragon – This was definitely one of the more anticipated matches of the entire tournament. The two started with lock-ups, that escalated to shoulder blocks, which escalated to elbows. The match spilled out of the ring where Scurll took control. Scurll hit a series of strikes in the corner, which only seemed to anger Shingo. Takagi erupted into his own strikes. The two battled atop the turnbuckles where Scurll landed a superplex for a two count. The two continued the striking contest where Scurll, rather than match smash for smash, used strikes to different parts of Takagi’s body to stay ahead. When Takagi got momentum going, King tripped him from behind. This enraged the crowd, and got the attention of Red SHoes. While Red Shoes turned his attention to King, Scurll struck with his umbrella. Takagi kicked out, but Red Shoes got bumped. King got in the ring and attacked Takagi. Still, Takagi managed to kick out and give King a Pumping Bomber that knocked him out of the ring. By this time, Takagi was clearly the crowd favorite. Takagi made his comeback and hit a Pumping Bomber and a Last Of The Dragon to finally pin Scurll and stay undefeated.

El Phantasmo (3-0, 6) p. Will Ospreay (3-0, 0) with a CR2 – These two became rivals due to Phantasmo’s joining of Bullet Club. Ospreay immediately hit a shotgun dropkick that took ELP out of the ring. The two fought around the floor where ELP gained control. Ospreay made his comeback and hit a standing Shooting Star for a near fall. Phantasmo retaliated with a springboard moonsault. The two went back and forth, exchanging strikes, reversals, and roll-ups. Ospreay mounted Phantasmo on his shoulders, climbed to the second rope, and slammed him to the mat for another near fall. Ospreay blocked a low blow, and landed a kick to the face. Phantasmo blocked an Oscutter, which put the two on the apron for the obligatory big match apron bump. This time, it’s a piledriver on Ospreay. If I never seen an apron piledriver again, it’ll be too soon. Anyway, he made it into the ring to beat the countout, and immediately was hit with a frog splash. He still kicked out, and reversed a Rainmaker into a powerbomb for another near fall. ELP hit a Cutter for a two count at the 25 minute mark. By this time, Phantasmo started arguing with Red Shoes. Red Shoes responded by shoving him into Ospreay, whi hit a Shooting Star for another near fall. Ospreay lifted him for a Stormbreaker, but ELP kicked Red Shoes. This allowed him to low blow Ospreay and hit the CR2 for the underhanded win. Terrible finish to an otherwise great match.