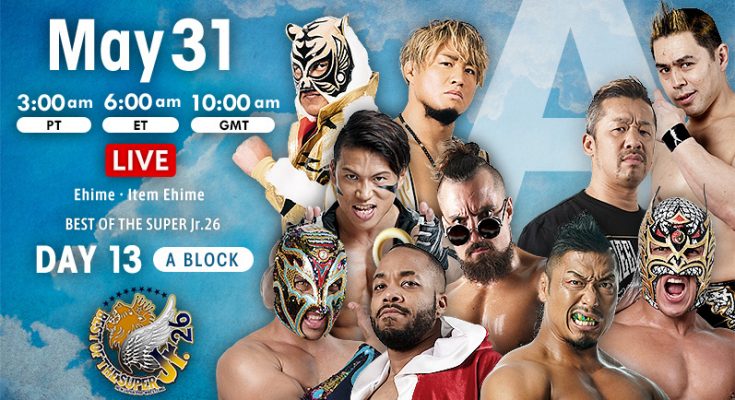 One match, and one match only, is the point of interest in this show. There are only two men still eligible to win A Block, and has luck (or in this case booking) would have it, those two men will face of in the main event tonight. All other A Block contestants have been mathmatically eliminated due to Shingo Takagi going undefeated.

Ryusuke Taguchi, Bandido, Yota Tsuji, & Shota Umino b. Tomohiro Ishii, Will Ospreay, Rocky Romero, & Yuya Uemera when Umino pinned Uemera with a Fisherman’s Suplex – Rocky and Bandido began, and fought to a stalemate. Tsuji tagged in and asked for Ishii. When Ishii obliged, Tsuji tried to take the fight to him. Instead, Tsuji got cut off and worked over by the CHAOS team. Taguchi got the tag and ran wild with Hip Attacks. Uemera caught Umino in a Boston Crab that got broken up by Bandido, which led to the obligatory multi-man brawl. Umino rallied and pinned Uemera with the Fisherman’s Suplex.

IWGP US Champion Juice Robinson & YOH b. Robbie Eagles & Jado of Bullet Club when Robinson pinned Jado with Pulp Friction – The heels attacked before the bell and brawled on the floor to get the early advantage. Juice got the hot tag and ran wild until he got hit from behind by Jado’s shinai. Yoh made the save, and hit a plancha to the floor on Eagles. Back in the ring, Juice hit the Left Hand Of God on Jado, and followed up with Pulp Friction for the pin.

NEVER Openweight Champion Taichi & Douki b. El Phantasmo & Gedo of Bullet Club when Taichi submitted Gedo with a Stretch Plumb – Douki and Phantasmo started out, with both men ducking and dodging each other’s moves. The action quickly spilled to the floor and into the crowd. Back in the ring, Gedo and Taichi got the respective tags and went at it. The two squared off with weapons. Taichi with his mic stand and Gedo with his Brass Knucks. The referee demanded the weapons get removed. Taichi dropped his mic stand to the floor, while Gedo only appeared to drop the knucks. However, when Gedo charged Taichi, he was met with a superkick. Taichi then got the submission with a Stretch Plumb.

After the match, Taichi beat up the referee for good measure.

Tatsuya Naito & BUSHI of Lost Ingobernables De Japon b. Toa Henare & Ren Narita when Naito pinned Henare with Destino – Naito tripped Henare from the outside and helped Bushi double team him. Narita got the tag and ran wild for a bit. Henare got back in and went toe to toe with Naito. Naito blocked a Uranage, and countered with a Tornado DDT. A Destino later, and LIJ had the match won.

After the match, Bushi beatdown Narita and tossed the referee to the floor.

Titan (2-6, 4) p. Tiger Mask IV (2-6, 4) with an armdrag – A very fast paced match out of the gate with the two going back and forth. Titan somehow managed to pin Tiger with an armdrag. The finish looked botched, as both Titan and Tiger seemed confused.

SHO (4-4, 8) p. Jonathan Gresham (4-4, 8) with a Shock Arrow – The two exchanged takedowns and holds, with neither man gaining any longterm advantage in the opening minutes. Gresham managed to hit a dive, and a Shootin Star press for a two count. When Sho kicked our, Gresham locked in a Figure Four. Amazingly, Sho managed to roll out of the ring while still in the hold, and both men fell to the floor. Still, Gresham did not break the hold until the count of 15 or so. Both men beat the count back in. The two exchanged dueling strikes. Gresham kicked out of a German Suplex, and then got leveled with a lariat. Sho hit a knee powerbomb for a two count at the ten minute mark. Before Gresham could react, Sho pinned him with a Shock Arrow.

IWGP Junior Heavyweight Champion Dragon Lee (6-2, 12) p. Marty Scurll (w/Brody King) (5-3, 10) with Desnucadora – Scurll grounded lee and stomped on his limbs. He worked over Dragon for the next few minutes. Lee made hiscomeback and the two traded a few very rapid fire DDTs and knee strikes. Dragon hit the Desnucadora, but King pulled the referee Red Shoes out of the ring before he made the count. After reviving Red Shoes, Lee again tried the Desnucadora. This time, Scurll countered with a DDT, and hit a clothesline for another two count. Draggon battled back, and finally hit a second Desnucadora to get the pinfall.

Now it’s main event time. This match has some serious expectations to meet. Anything other than am Ishimori victory will give the Block to Takagi.

Taiji Ishimori (7-1, 14) Shingo Takagi (9-0, 18) with Last Of The Dragon – As expected, this had a lot of reversals and counters. Neither men had any real momentum. Ishimori knocked Takagi to the floor with a handspring kick, Takagi hit Ishimori a Death Valley Driver on the ring apron for the obligatory big match apron bump. Ishimori hit a Canadian Destroyer, and Takagi responded with another clothesline right away for a double down.Takagi tried for another Death Valley Driver, only for Ishimori to counter with a crucifix pin. Takagi kicked out and again tried a DVD. This time Ishimori reversed it into a hurricanrana for a near fall. Takagi tried a Pumping Bomber, only for Ishimori to counter into a Yeslock. Takagi broke the hold, which led to the two exchanging dueling strikes. Ishimori rebounded with his own lariat. At the 20 minute mark, Ishimori hit his double knee powerbomb. Takagi kicked out, and was able to lift Ishinori for a Last Of The Dragon. That got the pin, and kept Takagi’s undefeated record.

After the match, Takagi took the mic and cut a promo