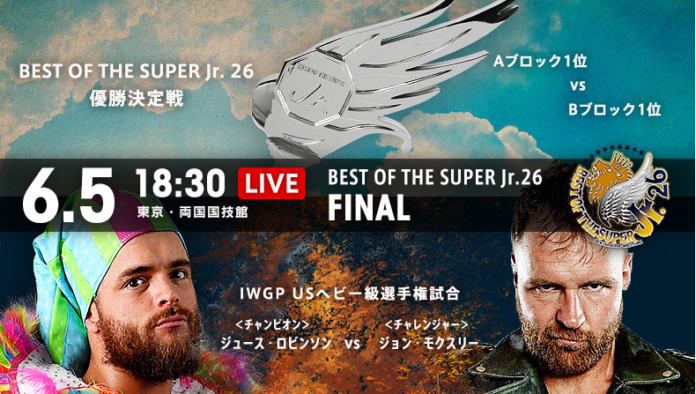 After a month long tournament, the two Block Winners face of to see who is the Best of Super Juniors Tournament winner. The undefeated Shingo Takagi will face Will Ospreay in the main event, but there is another featured match that may have the wrestling world buzzing even more about. As revealed last week, “Death Rider” Jon Moxley will make his New Japan debut challenging IWGP US Champion Juice Robinson for the title.

IWGP Junior Heavyweight Champion Dragon Lee, Titan, & Shota Umino b. Jonathan Gresham, Bandido, & Ren Narita when Lee pinned Narita with a running knee – The expected high speed battle saw a triple team on Lee which may have resulted in Narita pinning the champion had Titan not broken the pin. Lee also kicked out of Narita’s Belly To Belly Suplex, then hit a running knee for the pin.

Bullet Club (El Phantasmo, Taiji Ishimori, & Robbie Eagles) b. Ryusuke Taguchi & Roppongi 3K (Sho & Yoh) when Phantasmo pinned Sho with a CR2 – Of course, Bullet Club attacked before the bell. They cut off Taguchi and beat him down. Yoh got the hot tag and ran wild. Eagles managed to escape a 3K and hit Sho with a Turbo Backpack for a near fall. Eagles tried to finish off Sho with a 450, but Phantasmo blind tagged himself in. Phantasmo then hit the CR2 on Sho for the win.

After the match, Eagles got in Phantasmo’s face over the blind tag. This will also likely mean ELP and either Ishimori or Eagles will get an IWGP Junior Heavyweight Tag Title match.

Tomohiro Ishii, Toru Yano, YOSHI-HASHI, Tiger Mask IV & Jushin Thunder Liger b. Suzuki-Gun (Minoru Suzuki, NEVER Openweight Champion Taichi, Yoshinobu Kanemaru, Zack Sabre Jr., & Douki) when Hashi pinned Douki with Karma – For once, the heels did not attack before the bell. Liger started out against Douki, and quickly put him in a Surfboard. The battle quickly spilled to the floor, allowing Douki to do a top rope dive onto everybody. Back in the ring Ishii and Taichi squared off, followed by Sabre and Hashi doing the same. The heels ganged up on Hashi. Douki went for a Suplex De Luna. Tiger ran in to break it up, which triggered the obligatory multi-man brawl. In the ensuing brawl, Hashi hit Douki with Karma, and pinned him.

Los Ingobernables De Japon (Tetsuya Naito, EVIL, SANADA, & BUSHI) b. IWGP Intercontinental Champion Kota Ibushi, Togi Makabe, Tomoaki Honma, & Toa Henare when EVIL pinned Henare after a Magic Killer – Kota and Naito began, and battled to a standstill. Then Honma and Bushi tagged in. this time, the heels struck and the battle spilled to the floor. Honma and Evil were left in the ring to trade chops. Sanada tried, and failed, to put Makabe in the Paradise Lock. Things came full circle when it came back to Ibushi and Naito. The heels managed to gang up on Henare to turn the tide. Evil and Sanada hit Magic Killer on Henare, allowing Evil to get the pin.

IWGP Heavyweight Champion Kazuchika Okada & Rocky Romero b. Marty Scurll & Brody King when Okada pinned King with a Rainmaker – The heels cut off Romero and double teamed him. Okada got the tag, and ran wild until he too was double teamed. Romero made the save, and chased after Scurll. Back in the ring, Okada made his comeback and hit a Rainmaker on King to score the win.

After the match, Chris Jericho appeared via pre-taped promo. He said he will beat Okada and win the IWGP Title. When the lights came back on, Okada immediately looked over his shoulder to make sure nobody was sneaking up on him.

“Switchblade” Jay White p. Hiroshi Tanahashi with a small package – White attacked from behind before the bell. He pummeled Tanahashi on the outside, He smacked him against the ring apron, and wrapped his arm around the barricade. Back in the ring, White continued his assault focusing on the previously injured elbow. Tanahashi tried to make a comeback. only for White to cut him off again. White put Tanahashi in an armbar for several minutes, until Tanahashi was finally able to get the rope break. Tanahashi rebounded with a pair of Slingblades. Gedo got in the ring to blatantly interfere, but Tanahashi decked him. The referee tried to get Gedo out of the ring, giving White the opportunity to low blow Tanahashi and try a Blade Runner. Tanahashi blocked the Blade Runner and hit his own low blow just in time for the referee to turn around and count the roll-up. White kicked out, and when Tanahashi tried for a Cloverleaf, he rolled him up for a surprise pin.

Jon Moxley p. IWGP US Champion Juice Robinson with a Death Rider to win the title – Juice introduced his new short haircut. When the bell rang, the two immediately started fighting. Moxley knocked Juice out of the ring and hit a dive early. The two brawled through the crowd. Juiced countered a piledriver on the floor, and somersaulted off the top of the screen to the floor. Juice tried a cannonball on the outside, but Moxley dodged and Juice smashed into the barricade. Back in the ring, The match went back and forth. At the ten minute mark, Juice his a Juice Box for a two count. Moxley tossed Juice again to the floor, then set up a table. Moxley suplexed Juice through the table, and almost got the countout win. Juice made it to the ring at 19, and Moxley used a suplex-slam (for lack of a better name) and put Juice in a Figure Four around the ringpost. Juice made his comeback and finally hit the cannonball on the outside. Juice then set up the second table and powerbombed Moxley through it. Back in the ring, the two kept reversing each others finishers, until Moxley hit The Move Formerly Known As Dirty Deeds. Juice kicked out, so Moxley simpley hit an elevated version that is apparently called Death Rider.

I believe this makes Moxley the first man to hold both the WWE and IWGP versions of the US Title.

Will Ospreay p. Shingo Takagi with a Stormbreaker to win the Best Of Super Juniors – This match definitely had a Big Match Feel. And I’m not saying this because two of my to three picks were in it. Both men started with the feeling out process. Neither man dominated at first. Ospreay managed to dropkick Takagi out of the ring, and hit a dive to the floor. Takagi DDT’d Ospreay on the floor and hit a dive of his own to take control of the match. For the next several minutes, Shingo dominated the match. Ospreay made his comeback and hit a standing Shooting Star for a near fall. Takagi tried to reverse a suplex, but Ospreay turned that into a Stunner. At the 20 minute mark, Takagi hit a top rope Death Valley Driver. Ospreay kicked out and tried another comeback. Takagi kicked out of sick looking powerbomb. Ospreay missed the Robinson Special, and Takagi back suplexed him into the turnbuckles. Takagi positioned Ospreay on the apron for the obligatory big match apron bump. That backfired, and Ospreay hit an Oscutter on the apron. Takagi barely made it in at the count of 19. Ospreay capitalized and hit a Shooting Star for another near fall. Takagi then kicked out of an Oscutter. The two traded dueling strikes, and Takagi hit a Last Of The Dragon. Ospreay kicked out at the 30 minute mark. Takagi fired up and hit two straight Pumping Bombers, and STILL Ospreay kicked out. Shingo then apepared to lift Ospreay for another Last Of The Dragon, bit Ospreay turned it into a reverse hurricanrana. Ospreay followed up with a standing Spanish Fly for a near fall. Finally, Ospreay hit a third Oscutter, and immediately hit a Stormbreaker to get the pin.

After the match, Ospreay cut a promo thanking the fans, and telling Hiromu Takahashi to get well soon because he wants to fight him. He then told the crowd in Japanese that he is moving to Japan.