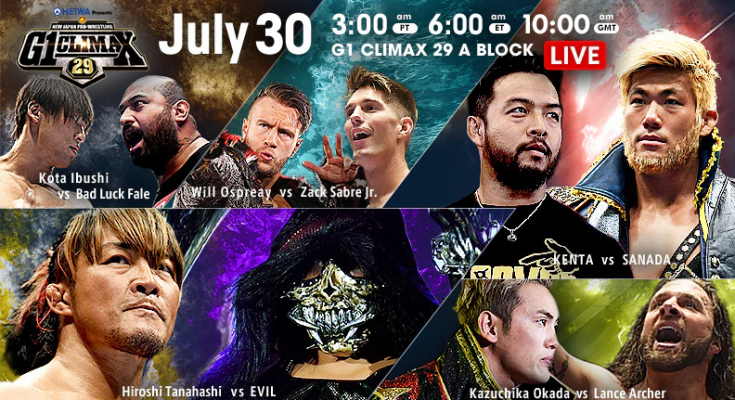 The latter half of this year’s G1 is here with eight more nights of block tournaments left to go. Now is when we start to see who truly has a shot at winning or not.

Hirooki Goto, YOSHI-HASHI, & Yota Tsuji b. Tomohiro Ishii, Tomoaki Honma, & Yuya Uemera when YOSHI-HASHI submitted Uemera with a Butterfly Lock – Obviously Goto, Hashi, and Ishii are all part of the CHAOS faction. Tsuji and Uemera are Young Lions who have a rivalry. Both Goto and Ishii, as well as Tsuji and Uemera, battled to standstills. Uemera showed a lot of fire with his dropkicks though.

Toru Yano & Ren Narita b. Jon Moxley & Shota Umino when Yano pinned Umino with a roll-up – Moxley motioned that he wanted to look at Yano’s DVD. Yano hollered that it would be 5000 yen. Moxley motioned to Umino to get the money, except Umino had no money either. Umino wound up borrowing 5000 yen from the ring announcer. Once Yano got his money, Moxley rolled him up from behind for a two count. After that, it was a more conventional match. A multi-man brawl broke out with everybody in one corner. Yano managed to low blow Umino and pin him. Yano then grabbed the DVD and the 5000 yen and ran off.

With Moxley being undefeated after five matches and so close to eliminating so many guys, it looks like Yano will actually be the one to finally beat him.

Bullet Club (Jay White, Yujiro Takahashi, & Chase Owens w/Gedo) b. Suzuki-Gun (Minoru Suzuki, Taichi, & Yoshinobu Kanemaru) when Owens pinned Kanemaru with a Package Piledriver – Since it was a battle of two heel teams, it was only natural that a brawl broke out before the bell. Everybody brawled through the crowd and nearly got counted out. Literally everybody dashed in the ring at the count of 19… only to continue brawling. When the smoke cleared, Owens got the win with the Package Piledriver.

Los Ingobernables De Japon (IWGP Intercontinental Champion Tetsuya Naito, Shingo Takagi, & BUSHI) b. Juice Robinson, Jeff Cobb, & Toa Henare when Takagi pinned Henare with a Pumping Bomber – Cobb got singled out with Takagi while everybody else fought on the floor. Henare tagged in and tried a tackle, but Takagi countered with strikes. Takagi hit a Noshigame for a two count. A Pumping Bomber later and Takagi got the pin.

After the match, Juice and Naito continued to brawl through the crowd. When they were finally separated, Naito mocked Juice’s mannerisms.

Kota Ibushi (3-2, 6) p. Bad Luck Fale w/Chase Owens & Jado (1-4, 2) with a Kamigoye – As expected, both Owens and Jado constantly interfered on Fale’s behalf. This nearly got Ibushi counted out. He made it in on the count of 18 and mounted his comeback. Owens still got a distraction and Jado struck with his cane. Ibushi still kicked out of a Big Splash. Ibushi hit a Boma Ye and a Kamigoye to give Fale a rare pinfall tournament loss.

Zack Sabre Jr. (1-4, 2) s. Will Ospreay (2-3) with an Octopus Hold – Both men started out with a mat-based gameplan, which worked until Ospreay knocked Zack out of the ring and did hi Superhero Landing flip. ZSJ grounded Ospreay with submissions before taunting him with swats and kicks. Ospreay fired up and hit an Oscutter, but Sabre kicked out and locked in a submission. Ospreay made the rope break and hit a brainbuster. Sabre escaped a Stormbreaker and hit a PK. Ospreay went for a Shooting Star which Sabre turned into another submission. After reversing into a powerbomb, Ospreay hit the Shooting Star. Sabre responded with an Octopus Hold, and this time Ospreay couldn’t counter and was forced to submit.

IWGP Heavyweight Champion Kazuchika Okada (5-0, 10) p. Lance Archer (2-3, 4) with a Rainmaker – Archer attacked the champion before the bell. He tossed Okada to the floor and battered him pillar to post. Back in the ring, Archer continued the assault and repeatedly hit vertical splashes in the corner. Okada showed his first sings of life by dodging a splash and rolling him up for a two count. Okada made his comeback and hit two Rainmakers. Neither of which even knocked Archer over. Archer hit his own Rainmaker and followed up with a Blackout. Okada got his foot on the ropes to break the count. Okada hit a pair of dropkicks and a missile dropkick. Archer reversed a Tombstone which Okada escaped and hit a third Rainmaker. Archer still wouldn’t go down, so Okada hit a fourth Rainmaker that finally put him down for the count.

With that win, Okada eliminated the bottom half of the block.

SANADA (1-4, 2) p. KENTA (4-1, 8) with a Moonsault – The two men each tried to win over the crowd by catering to them. When that started to favor Sanada, Kenta struck from behind. Kenta worked over Sanada for the next several minutes. At the ten-minute mark, Kenta used the Game Over. Sanada made the rope break and hit a TKO for a two count. Kenta countered the moonsault with his knees. They traded dueling strikes and kicks. Sanada kicked out of a Psycho Knee. At the 15-minute mark, Sanada managed to clamp on the Skull End. This time Kenta was unable to escape, and Sanada hit the moonsault to score the pin.

They have well over an hour left for the main event match that has a 30 minute time limit. Something must be up.

Hiroshi Tanahashi (3-2, 6) p. EVIL (3-2, 6) with a High Fly Flow – Unlike the previous heels tonight, Evil actually was somewhat respectful and did not attack from behind. He still kicked Tanahashi in the gut instead of going for the lock up. Evil focused on Tanahashi’s knees and kept him grounded. Tanahashi made his comeback and hit a Slingblade at the ten-minute mark. A High Fly Flow to the floor caused Tanahashi to favor his knee. Both men nearly got counted out and hit the ring at 19. Tanahashi tried for a Cloverleaf but Evil made the rope break before he could lock it in. Evil got a two count with a superplex. Tanahashi also kicked out of a Darkness Falls. Evil went for Everything Is Evil, which is where Tanahashi sprang to life and made his comeback with a Slingblade. Evil countered a High Fly Flow by blocking with his knees. The two battled back and forth with strikes at the 20-minute mark that ended with Evil landing a huge lariat. Tanahashi countered Everything is Evil with a Dragon Suplex and perched on the top rope for a High Fly Flow body press. after hitting that, Tanahashi finally hit the standard High Fly Flow to get the pin.

After the match, Tanahashi did the obligatory show closing promo, and did his usual air guitar antics.