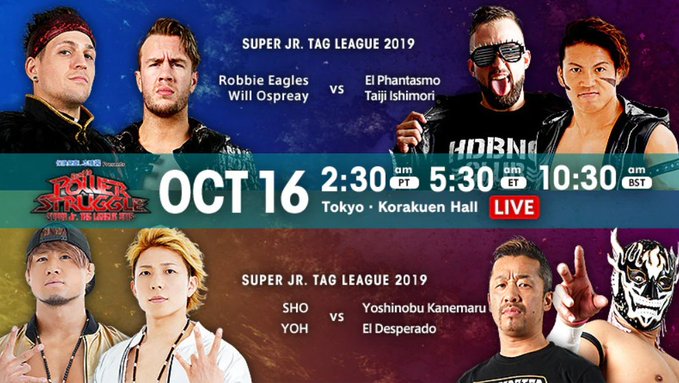 The annual Junior Tag League is upon us, where several teams compete in a round-robin tournament. Not only will the winners be recognizes as the tournament champions, they will receive a Junior Heavyweight Tag Team Championship match. Unless, of course, the champions themselves win like what happened the last few years with Roppongi 3K.

The Teams competing in the Junior Tag League are

Power Struggle will be headlined by Jay White defending the IWGP Intercontinental Championship against Hirooki Goto, while KENTA will defend the NEVER Openweight Title against former champion Tomohiro Ishii. In the meantime, undercard tag matches will keep them all busy until the show.

Tomoaki Honma & Toa Henare b. Jyushin Thunder Liger & Yota Tsuji when Henare pinned Tsuji with a Uranage – Tsuji got worked over until Liger got a hot tag and fought to a standstill. A double tag saw Tsuji and Henare go toe to toe. Tsuji got a surprise two-count with a roll-up, but Henare kicked out and hit the Uranage for the win.

Los Ingobernables De Japon (Tetsuya Naito, Shingo Takagi, EVIL, & BUSHI) b. Suzuki-Gun (Minoru Suzuki, Zack Sabre Jr., Taichi, & DOUKI) when EVIL submitted DOUKI with a Scorpion Deathlock – LIJ kickstarted the match when Naito attacked Taichi before the bell. Takagi traded blows with Suzuki, which REALLY made me want to see a singles match between the two. The match spilled to the floor where Suzuki-Gun gained control. Back in the ring, they got the heat on Takagi. Sanada got the tag and matched holds and takedowns with Sabre. Evil got the upper hand on Douki when Suzuki-Gun cleared the ring and ganged up on him. LIJ quickly returned the favor and ganged up on Douki.. This led to the obligatory multi-man brawl where Evil used the Scorpion Deathlock to get the submission.

Bullet Club (IWGP Intercontinental Champion Jay White, NEVER Openweight Champion KENTA, & Yujiro Takahashi) b. Hirooki Goto, Tomohiro Ishii, & Karl Fredericks when KENTA pinned Fredericks with the Go 2 Sleep – White actually started against Goto and quickly went to the eyes. Goto recovered and came back with shoulderblocks. A multi-man brawl broke out, leaving Fredericks and Takahashi as the legal men. KENTA and Ishi brawled into the announcer’s table where KENTA grabbed Milano Collection AT’s shoe and beat Ishii with it. Meanwhile, Takahashi took control and the heels got the heat on Fredericks. Goto got the hot tag and ran wild until Ishii and and KENTA tagged in. Fredericks got the tag which led to Kenta reversing a hurricanrana attempt into a Boston Crab. Ishii made the save, but couldn’t stop the inevitable because Kenta hit the GTS and got the pin.

Volador Jr. & Titan b. Tiger Mask IV & Yuya Uemera when Titan pinned Uemera with a Double Stomp – Volador and Tiger fought to a stand still, then tagged out to Titan and Uemera respectively, who engaged in a duel of chops. The luchadores cut off Uemera and worked him over until Tiger got a tag and held his own against both of them. Uemera tagged back in at the 10-minute mark and put Titan in a Boston Crab. Volador tried several times to break the hold before Uemera dropkicked him to the floor. Tiger and Volador fought on the floor while the legal men continued in the ring. Titan hit a Falcon Arrow and a springboard Double Stomp to get the pin.

Supercoach (Ryusuke Taguchi & Rocky Romero) b. TJP & Clark Connors when Romero submitted Connors with a Cross Armbreaker – Both teams seemed evenly matched until Supercoach disagreed with each others’ plays. This gave the younger team the chance to cut off Romero. Taguchi got the tag and ran wild with Hip Attacks. Romero made a blind tag and tried a hurricanrana that backfired. Connors reversed into a Boston Crab while Taguchi got caught in and Ankle Lock. In a hilarious spot, both Coaches traded plays to break out of their holds. Romero tried to make a comeback but got caught in a Powerslam from Connors. Before he could capitalize, Connors got hit with a Double Hip Attack from The Coaches. Connors and Romero exchanged several exciting near-falls that ended with Romero’s Falcon Arrow-Armbreaker combo.

El Desperado & Yoshinobu Kanemaru of Suzuki-Gun b. Roppongi 3K (Sho & Yoh) of CHAOS when Desperado submitted Sho with a Stretch Muffler – R3K attacked right from the start and sent the heels to the floor. After a brawl through the crowd, the heels gained control and nearly won by countout. Back in the ring, they got the heat on Sho. Yoh got the hot tag and ran wild until Kanemaru hit a dropkick to the knee. After getting double teamed for a bit. Yoh tagged Sho back in. While selling his back, Sho made a comeback. Desperado reversed with a spinebuster and locked in the Stretch Muffler. Sho made the rope break which allowed the babyfaces to do some double-teaming of their own. Sho hit a Power Breaker for a two count. Kanemaru tried to spit his whiskey into Sho’s eyes but Sho avoided it. A brief four-way brawl broke out that cased Red Shoes to get bumped. With Red Shoes down, Desperado hit Sho with a chair and pocked in another Stretch Muffler. This time, Sho submitted.

After the match, the heels continued the beatdown because, well, they’re heels.

IWGP Junior Heavyweight Champions El Phantasmo & Taiji Ishimori of Bullet Club The Birds Of Prey (IWGP Junior Heavyweight Champion Will Ospreay & Robbie Eagles when Phantasmo pinned Eagles with a CR2 – Ishimori and Eagles started the match. WhenIshimori got tossed out of the ring, he tagged in Phantasmo, who demanded Ospreay tag in. It didn’t take long for the heels to take a cheap shot and take the match to the floor. They got the hear on Ospreay with frequent double-teaming. Finally, Eagles got the hot tag and ran wild. Ishimori clotheslined him for a double down which saw Ospreay and ELP both get tagged in. The two legal men traded big moves for several exciting near falls. At the 15-minute mark, The Birds hit a Super Sliced Bread on Phantasmo for a two-count. A four-way fight broke out that saw several pins broken up. Ospreay tried to break a pin on Eagles with a Shooting Star, ,only for Phantasmo to move which caused Ospreay to land on his own partner. The heels tossed Ospreay out of the ring and distracted Red Shoes. Phantasmo hit a low blow, followed by both men hitting their finishers, to finally finish off Eagles.