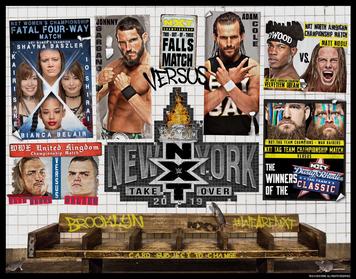 It’s WrestleMania weekend, and the first WWE show to cover is NXT Takeover. Unlike past years, the show will fall on a Friday, rather than the usual Saturday. Also, the planned main event had to be changed in the final weeks. That said, I don’t think too many people will complain about a Gargano/Cole main event.

In the pre-show Stephan Benson beat AJ Styles in the Million Dollar Challenge.

NXT Tag Team Champions The War Raiders (Rowe & Hanson) b. Aleister Black & Ricochet when Hanson pinned Ricochet after Fallout to retain the titles – Champions introduced first… Ricochet got a pretty impressive entrance as well, with a lot of dashing lights. Both pairs of men fought to standstills, until Ricochet and Black managed to knock both Raiders to the outside. They sat Indian Style in the ring as a taunt. Once the match picked back up, the two teams went back and forth in control. Hanson tried a body press on Ricochet, who CAUGHT HIM and hit a fallaway slam. Hanson managed to dodge a Ricochet kick and hit a backflip elbow of his own. So the big man is more agile than the smaller guy, and the smaller guy is stronger than the bigger guy. About this time the crowd started chanting “Fight Forever”, which is one of my LEAST favorite chants. All four men hit dives to the outside, leading to a near double-countout. Black hit the Black Mask Kick, which Ricochet followed up with a Shooting Star. Hanson still managed to break the pin. Ricochet missed a 630, and Hanson decked Black on the floor. This allowed the Raiders to hit Fallout for the win

After the match, all four men shook hands in a show of respect. The crowd gave Black and Ricochet a standing ovation. It clearly looked like a fairwell for NXT.

NXT North American Champion Velveteen Dream p. Matt Riddle with a roll-up to retain the title – The North American championship has traded hands like four time in the past few months. Anyway, this time the champion was introduced last, as it should be. Both men worked the crowd for the opening minutes. Riddle hit several gut wrench suplexes and an exploder. Dream wouldn’t stay down, and Riddle started showing signs of frustration. He resorted to punches, which drew the ire of the crowd. Riddle began hitting several kicks, which only caused Dream to start hulking up. Dream clotheslined Riddle to the outside, and hit a Savage style Double Axhandle from the top rope to the floor. Riddle kicked out of a Codebreaker. Dream followed up with a Penalty Kick, which Riddle reversed into an Anklelock. Dream escaped and hit a Dream DDT. Riddle reversed the Purple Rainmaker into a Bromission. When Dream escaped, he hit a German suplex and an Exploding Bro for a near fall. Dream also kicked out of a Flash Knee. Riddle locked in another Bromission. This time, Dream managed to roll backwards and tie up Riddle for a three count.

Now THAT was a competitive finish! Riddle was at first shocked, but after a few minutes extended a fistbump. It’s refreshing to see opponents show respect and NOT attack from behind afterward.

They showed footage of KUSHIDA signing his WWE contract, then cut to him in the crowd.

Walter p. NXT UK Champion Pet Dunne with a Frog Splash to win the championship – Walter dominated for much of the first half, with Dunne showing occasional signs of life. Dunne finally managed to knock Walter out of the ring, and started his comeback. A footstomp from the top to the floor by Dunne, which looked REALLY scary. Walter managed to catch Dunne in a powerbomb for a near fall. Walter regained control of the match and resumed stalking his prey. A top rope Sleeper Suplex for another near fall. Dunne locked in a submission, but Walter was able to break the hold with the ropes. Walter reversed a Triangle and powered out. He managed to land several stomps in frustration. Dunne fired up and hit a Bitter End. Walter kicked out (a first for a Bitter End, at least for a while). The two resorted to dueling chops and strikes. Walter got the better of it and decked Dunne. Walter went to the top, but Dunne cut him off and tried for a Triangle. I’m not sure how a submission on the top rope is supposed to end. It didn’t matter though, as Walter reversed into a top rope powerbomb, and hit a Frog Splash for the win.

Very good match. My only concern now is that Vince McMahon night see this and think Walter needs to be on the main roster RIGHT NOW. I actually was thinking that they may keep the title on Dunne so he can pass Okada’s 720 day reign, but it was not to be. And that’s just fine.

After the match, Walter took the belt and walked to the back, leaving Dunne alone in the ring.

NXT Womens Champion Shayna Baszler b. Bianca Belair, Kairi Sane, & Io Shirai when she submitted Bianca Belair to the Ace Of Spades – This is effectively a 3 on 1 in the favor of the babyfaces. The babyfaces ran wild early on, until Baszler was subdued on the floor.T hey they went after each other. Baszler rejoined the match, which lead to a Tower Of Doom spot. As the three babyfaces continued the match, Baszler managed to keep the match from ending by interjecting herself at the right times to avoid pinfalls or finishers. At one point both Ice Pirates– I mean Sky Pirates battled each other. Belair hit both Pirates with a KOD. Baszler broke the pin and locked Belair in an Ace Of Spades Rear Naked Choke.

It almost seems like they are trying to turn Baszler babyface, since she effectively fended off three opponents cleanly.

An excellent video package aired, detailing the rise of Johnny Gargano and Adam Cole. It really made this rearranged main event still seem like a big deal.

Johnny Gargano s. Adam Cole (Bay Bay) with a Gargano Escape in the third fall to with the vacant NXT Championship – This show looks like it’s going to go over three hours, which may be a first for NXT. This was an intense, high speed match out of the gate. Cole managed to get the upper hand with an enzuigiri. He then grounded Gargano with headlocks. Gargano made his comeback, but couldn’t keep Cole down. The two traded small packages. Cole reversed a Sunset Flip, and hit a Last Shot from behind to win the first fall. Gargano took control in the second fall, and hit a top rope Air Raid (Ciampa’s move) for two count. Gargano hit a Tornado DDT on the apron, which caused both men to fall to the floor. Gargano beat the countout, but rather than take the countout victory, he went back to the floor. Cole retaliated by whipping him into the ringpost. Back in the ring, Cole went for the kill. Gargano instead tied up Cole with a Gargano Escape. This put both men at one fall apiece. The two shifted gears again for the third fall, with both men kicking out of each other’s big moves. Gargano used a reverse hurricanrana and followed up with a superkick that knocked Cole out of the ring. Cole responded with a wheelbarrow suplex into the apron. Back in the ring, Gargano hit a dive and tried for a springboard forearm. Cole countered with a superkick, only for Gargano to kick out. Cole followed up by booting Gargano to the floor. Cole taunted Gargano, which fired Johnny up and put him on the warpath. Cole used a Fairy Tale Ending on the announce table. However, the table did notbreak and Gargano bounced to the floor. Gargano barely beat the count, and still kicked out of another superkick. Gargano used his own superkick, which Cole took and hit another one. Cole went for a Canadian Destroyer, but Gargano countered into another Gargano Escape. Roderick Strong ran out and distracted the referee, so Cole’s tapout went unnoticed. Cole then kicked Gargano into the ref, causing the ref to fall to the outside. O’Reilly and Fish hit their finisher on Gargano, yet Gargano still kicked out. Cole charged at Gargano, but Gargano countered with a backdrop that sent Cole through the air and into his teammates. Gargano knocked around the three other Undisputed Era while Cole regained his composure in the ring. Cole pounced when Gargano got back in the ring. Gargano kicked out of a Last Shot. Cole began screaming at Gargano that it was his time. Gargano fired up and put Cole in the Gargano Escape. This time, Gargano managed to keep Cole from naking it to the ropes. Cole had no choice but to submit.

The audience went absolutely nuts for that finish. A legit MOTY contender. Candace LaRae ran out to the ring and celebrated with her husband., followed by Tommaso Ciampa. In what was perhaps the original intended post-match story, Ciampa and Gargano embraced in a feel-good closure to the show. 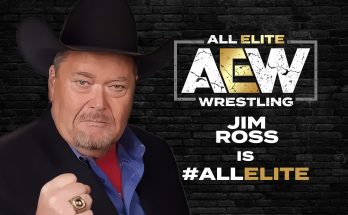 Jim Ross signs with AEW. Will call Double Or Nothing PPV.