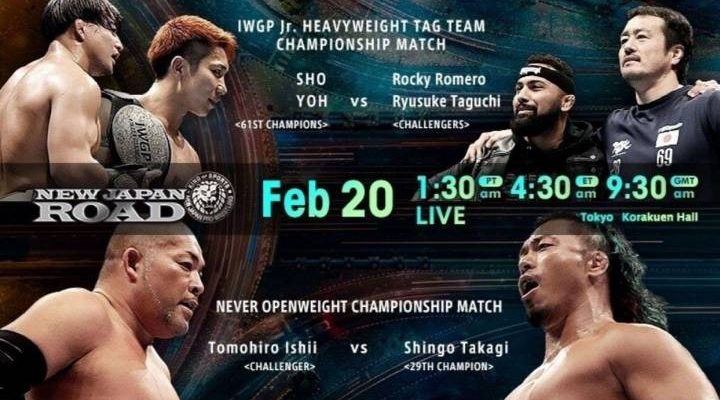 Suzuki-Gun (Minoru Suzuki, El Desperado, Yoshinobu Kanemaru, & Taichi) b. CHAOS (Hirooki Goto, RevPro Champion Will Ospreay, & YOSHI-HASHI) & Yuya Uemura when Kanemaru pinned Uemura with a Deep Impact DDT – Surprisingly, Uemura attacked Suzuki out of the gate. The battle spilled to the floor where the heels took over. Suzuki got payback by smashing Uemuera around the floor and hitting him with chairs. Back in the ring, Taichi battled with Hashi. The faces rallied and teamed up on Kanemaru. Uemura hit an Overhead Belly-To-Belly on Kanemaru, but the heels countered and a multi-man brawl broke out. While everybody fought on the floor, Kanemaru put Uemura in a Boston Crab. While Uemura managed to escape, he was quickly met with a Deep Impact DDT and got pinned.

After the match, Suzuki lifted Uemera for a Piledriver, but released him instead.

Kazuchika Okada & Toru Yano of CHAOS & Colt Cabana b. Togi Makabe, Tomoaki Honma, & Toa Henare when Cabana pinned Honma with a Superman Roll – Some comedy early on with Yano & Cabana where each man insisted that the other go first. Eventually Okada stepped through and declared HE would go first. Yano removed a turnbuckle pad to get the upper hand on Henare. Makabe got the hot tag and went at it with Okada. The finish saw Yano low blow Honma, which allowed for Cabana to roll him up for the pin.

Manabu Nakanishi, Yuji Nagata, Yoshihiro Tenzan, & Tiger Mask IV b. Los Ingobernables De Japon (IWGP Heavyweight and Intercontinental Champion Tetsuya Naito, IWGP Junior Heavyweight Champion Hiromu Takahashi, EVIL, SANADA, & BUSHI) when Kojima pinned EVIL with a Western Lariat – This has of course been Nakanishi’s retirement tour. So the announcers threw it out there about what if Nakanishi pins Naito. As luck would have it, Nakanishi started against Naito, but Takahashi & Bushi attacked him from behind. This established LIJ as the heels of the match. They cut off Tiger and worked him over, even trying to unmask him. Nagata got the hat tag and ran wild. Kojima hit Evil with the machine gun chops, but a multi man brawl broke out before he could hit his elbow. Evil dodged the Western Lariat and hit Darkness Falls on Kojima. Nakanishi broke the pin and hit Evil were a Herculean Cutter. He followed up by hitting the world’s worst quebrada on everybody on the floor. Kojima then managed to hit Evil with the Lariat and get the pin.

Bullet Club (Jay White, Bad Luck Fale, IWGP Heavyweight Champions Tama Tonga & Tanga Loa) b. Hiroshi Tanahashi, Kota Ibushi, Juice Robinson, & David Finlay when Loa pinned Robinson after a belt shot – The heels naturally attacked before the bell. They cut off Finlay and worked him over. Tanahashi got the hot tag and the babyfaces rallied to clear the ring. Jado tried to use the shinai, but the referee yanked it from him before he could. However, Gedo caught the referee’s attention, which allowed Tonga to clobber Juice from behind with the belt. Loa then pinned Juice when the ref turned around.

The heels proceeded to beat up the babyfaces after the match because they’re dicks and they can.

IWGP Junior Heavyweight Tag Champions Roppongi 3K (Sho & Yoh) b. Mega Coaches (Ryusuke Taguchi & Rocky Romero) when Sho pinned Romero after a Strong X to retain the titles – The story here is that Rocky manages Roppongi 3K. So it is the students facing the master. Plus, the Coaches beat R3K in the Super Junior Tag Tournament. The teams were even for the first few minutes until Rocky slapped Yoh in the face, which switched the match to a higher gear. Taguchi ran wild with Hip Attacks and “B-Triggers” (you can guess what the “b” stands for). At the ten-minute mark, Yoh and Taguchi exchanged holds, with Taguchi getting the Ankle Lock. Yoh escaped and got the tag to Sho. Taguchi rebounded and tagged Rocky. The Coaches got both opponents in submissions at the 15-minute mark, which both got reversed. Both teams did impressive double team moves, including the Apollo 55 Finisher by Taguchi and Rocky. At the 20-minute mark, a four-way brawl broke out which eventually left Sho and Romero in the ring. Romero reversed a Shock Arrow into a Small Package for a two-count. That was how Romero pinned Sho during the Super Juniors Tournament. Romero got hit with the 3K, but Taguchi broke the pin attempt. While Yoh disposed of Taguchi, Sho hit Romero with the Shock Arrow. Rocky still kicked out, but that just lead to a Strong X Team Finisher.

After the match, all four men made up and shook hands.

NEVER Openweight Champion Shingo Takagi p. Tomohiro Ishii with Last Of The Dragon to retain the title – As expected, this was a hard-hitting match with a lot of strikes and shoulder blocks. Takagi finally got the upper hand, but around the ten-minute mark, Ishii roared to life with chops. The two battled on the apron for the obligatory big match apron bump, which this time was Takagi hitting Ishii with a DVD. The two exchanged several German Suplexes and Back Drops. Ishii landed a Superplex at the 20-minute mark. Takagi fought back with a Made In Japan. Ishii kicked out of a Pumping Bomber at one. Takagi returned the favor by kicking out of a suplex at one. The two escaped and attempted to reverse each other’s finishers. Ishii kicked out of a second Pumping Bomber at two. Finally, Takagi finished off Ishii with a Last Of The Dragon.

After the match, both men seemed to want to continue the fight, but eventually Ishii was lead backstage. Takagi cut a promo saying he was still the champion. Ishii beat the hell out of him, so it’s good pain. He stated this is what the NEVER Openweight Division is all about, and that everybody will have to come and get the title from him. 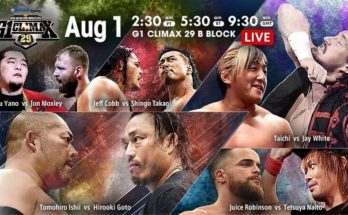