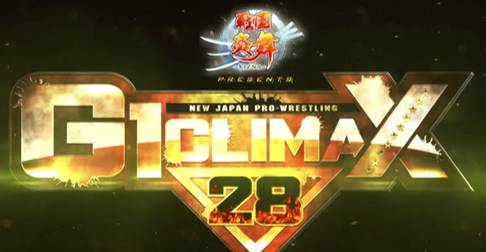 It’s the next day of A Block action as The G1 Climax enters its final third. The main event of this show is the always interesting matchup of Kazuchika Okada vs. Minoru Suzuki.

Toru Yano & Gedo of CHAOS b. Toa Henare & Ren Hirata when Yano pinned Hirata. Gedo started the match telling Henare “Calm down, boy”, only to thumb him in the eye. Gedo then mocked him with a tribal like dance. Henare then decked Gedo and did the “real” dance. Yano teamed up with Gedo to beat down Henare. Hirata got a tag and decked Yano with a dropkick. The two faces cleaned house, and Hirata got a near fall on Yano. However, Yano lured Hirata to charge into the exposed turnbuckle. Yano then did a takedown and pinned Hirata.

After the match, Henare seemed to complain about tights being pulled, but it did not look like that happened.

The Guerrillas Of Destiny (Tama Tonga & Tanga Loa) of Bullet Club OG b. NEVER Openweight Champion Hirooki Goto & Yoh of CHAOS when Loa pinned Yoh with an Over The Shoulder Piledriver. I never get tired of Hirooki Goto’s theme music. Also, with Jay White in tournament action tonight, Yoh will not get bullied. The GODs attacked before the bell. Goto and Yoh retaliated and took it to Loa. Tonga grabbed Goto and chucked him to the outside. This left Loa in the ring with Yoh. The Tongan brothers got the heat on Yoh until Goto got the hot tag. Goto held his own against both opponents, then Yoh tagged himself in. Yoh got a few near falls, but Loa outlasted him and hit the Over The Shoulder Piledriver for the win.

IWGP United States Champion Juice Robinson & David Finlay b. Zack Sabre Jr. & Taka Michinoku of Suzuki-Gun when Finlay pinned Taka with a Stunnner. Juice is mathematically eliminated from winning, but he and Finlay have an impressive run in these tag matches. Finlay and Taka went back and forth, and remained fairly even until ZSJ tagged in. The heels worked over Finlay until he caught a breather with a dropkick. Double tag out to Juice and Zack, with the two trading strikes. Sabre tried to remove Juice’s cast, but Juice escaped and tagged in Finlay. Juice and Sabre fought on the outside, with Finlay and Taka going at it on the inside. After Juice managed to break up a submission on Finlay, the ending came with Finlay hitting a Stunner on Taka.

Tomohiro Ishii & Sho of CHAOS b. IWGP Heavyweight Champion Kenny Omega & Chase Owens when Ishii pinned Owens with a brainbuster. Omega and Owens got the heat on Sho. Ishii tagged in and pummeled Owens in the corner. Owens tried his own strikes against Ishi, but failed to even faze him. Omega came in for a quick double team, but missed a superkick and hit Owens. This allowed Ishii to get the pin with a brainbuster.

Tetsuya Naito & SANADA of Los Ingobernables De Japon b. Kota Ibushi & Yujiro Takahashi when Sanada submitted Takahashi with Skull End. Kevin Kelly pointed out that only Omega, Naito, and Ibushi are left with the possibility of winning the B Block, due to Omega being thusfar undefeated. Even if Naito were to tie with Omega in points, Omega would still be the winner due to him beating Naito in their encounter. Sanada tried to tie up Yujiro in the Paradise Lock. Yujiro escaped and tried himself to tie up Sanada, but failed. LIJ worked over Yujiro until he got a tag to Ibushi. Naito and Ibushi went back and forth until a double down and double tag out. Sanada kicked out of an inverted DDT and went for a Skull End. Ibushi tried to break it up, leading to a four way. In the melee, Sanada cinched in the Skull End to submit Takahashi.

After the match, Naito motioned to Ibushi for a fist bump, but Ibushi blew it off.

Michael Elgin (4) b. Bad Luck Fale (6) by DQ when Tama Tonga interfered. As usual, Tanga Loa accompanied Fale to the ring and did a ring introduction. Fale motioned for a test of strength, then swatted Elgin away when Elgin obliged. Loa grabbed Elgin’s ankle from the outside, momentarily distracting him. Elgin responded by hitting Loa with a Suicide Dive. Fale took the opportunity to throw Elgin into the guardrail, and work over the taped arm. Elgin tried to make a comeback, but couldn’t lift Fale for a suplex. Fale splashed Elgin for a two count, and tried the Hand Grenade a few times. Each time, Elgin escaped and stayed alive with kicks. Fale tried to lift Fale for power moves, but Fale proved to be too heavy. Fale went for the Bad Luck Fall, but Elgin escaped. The referee got bumped, allowing Loa to hit the ring. The crowd loudly booed until Elgin mounted a comeback. He knocked Loa out of the ring, and finally managed to slam Fale. Tama Tonga ran out and started beating on Elgin with a chair. The referee saw this, and signaled for the DQ. This did not stop the heels, and Tonga repeatedly smashed Elgin’s injured arm with the chair, as well as some ring personnel for good measure.

Hangman Page (2) p. Togi Makabe (4) with a Rite Of Passage. The fight went to the outside early with both men tossing each other into the guardrail. Page worked over Makabe in the ring until he made the mistake of landing strikes. That only served to rile up the unchained gorilla. Makabe made a comeback and hit the Spider German Suplex. Page dodged the King Kong Knee Drop and traded several clotheslines which capitalized with a Buckshot Clothesline. Page followed up with the Rite Of Passage for his first clean win of the tournament.

“Switchblade” Jay White (8)p. YOSHI-HASHI (2) with a Blade Runner. Another meeting of CHAOS teammates. White attacked Hashi from behind and berated him over last night’s tag match. He slammed him repeatedly into the railings and ring apron. He grabbed a chair, which referee Red Shoes stopped him from using. Hashi came to and made his comeback. White kicked out of a powerbomb and shoved Hashi into Red Shoes. With Red Shoes out of the way, White went for a Blade Runner. Hashi countered and landed a Fisherman’s Buster for a two count. Hashi went for Karma, but White escaped and revered that into a Blade Runner for the pinfall victory.

Hiroshi Tanahashi (10) p. Evil (8) with a High Fly Flow. Evil got the upper hand early on by working over Tanahashi’s arm for several minutes. Tanahashi tried a comback, but got knocked off the top rope to the outside. Evil continued his assault on the floor before getting several near falls in the ring. Tanahashi reversed Everything Is Evil into a small package, which Evil kicked out of. Tanahashi hit a top rope body press, but missed the High Fly Flow. Evil capitalized and hit several moves, but couldn’t get the pin. Tanahashi reverse Everything Is Evil with his own STO, and finished off Evil with a High Fly Flow.

Kazuchika Okada (8) p. Minoru Suzuki (8) with a Rainmaker. Of course, El Desperado accompanied Suzuki to the ring. And also of course, Suzuki attacked before the bell, and took the fight to the floor. He smashed Okada with chairs and guardrails. Okada barely made it in to avoid getting counted out. Suzuki continued pummeling Okada, and once again nearly won via countout, as Okada was barely moving. After several minutes of taking this brutal punishment, Okada finally fired up and scored a few near falls. Suzuki used several submission moves, but Okada did not quit. Suzuki literally laughed at Okada’s strikes. Okada countered a Gotch Piledriver into a pin attempt, and hit the Too Awesome Dropkick. Suzuki unleashed with several combination strikes, and dropkicked Okada to the mat. Okada unsuccessfully tried a Tombstone Piledriver, and Suzuki clamped on the Rear Naked Choke. Okada escaped and the successfully hit the Tombstone. Right afterward, Okada used Suzuki’s own Rear Naked Choke and another Tomsbstone. To add to that, Okada followed up with a Rainmaker and pinned Suzuki.