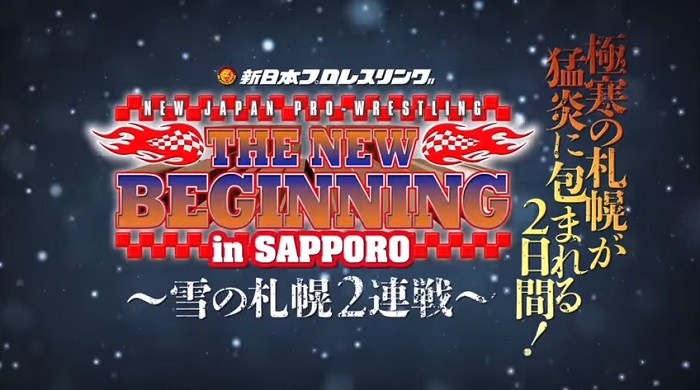 Shota Umino & Ayato Yoshida b. Hiroyoshi Tenzzan & Yota Tsuji when Umino pinned Tsuji with a Fisherman’s Suplex – The Young Lions faired well against Tsuji, but struggled against Tenzan. Tenzan didn’t congratulate them for the win, but still seemed disappointed in the loss.

YOSHI-HASHI s. Ren Narita with a Butterfly Lock – Basic glorified squash match. Narita jumped the gun out of the gate and took it to Hashi. He even got him in a Boston Crab. Hashi returned the favor and got his own Boston Crab on Narita. Upon escaping, Narita tried for some desperation pinning combinations. None of them worked, and Hashi locked in the Butterfly Lock for the submission.

Yuji Nagata & Chase Owens of Bullet Club b. Tomoaki Honma & Toa Henare when Owens pinned Henare with a Package Piledriver – Both babyfaces got the shine in the opening minutes. Eventually, the heels cut off Henare and worked him over until Honma got the tag. The heels tried unsuccessfully to double team Honma. Henare tagged back in and the two babyfaces cleaned house. Owens still managed to kick out of a double Kokeshi. Henare followed up with a spear, but Takahashi broke the pin. Owens hit the Package Piledriver and got the three count.

Los Ingobernables De Japon (EVIL, SANADA, & BUSHI) b. Suzuki-Gun (Minoru Suzuki, Yoshinobu Kanemaru, & El Desperado) when Evil pinned Kanemaru after a Magic Killer – As expected, the brawl broke out before the bell and quickly spilled to the floor. When everything got back in the ring, Suzuki-Gun worked over Bushi. Sanada got the hot tag and ran wild until he tried to put Suzuki in the Paradise Lock. Suzuki avoided it and tried to use the Gotch Piledriver, which Sanada powered out of. Evil tagged in and got triple teamed. Kanemaru hit the Deep Impact DDT only for Bushi to break the pin. All six men resumed brawling, and in the action Evil and Sanada pinned Kanemaru with a Magic Killer.

IWGP Intercontinental Champion Tetsua Naito & Shingo Takagi of Los Ingobernables De Japon b. Taichi & Taka Michinoku of Suzuki-Gun when Takagi pinned Taka with a Last Dragon – LIJ dominated off the bat until Taichi struck Takagi with his mic stand. Takagi got constantly pummeled, but managed to get the hot tag to Naito. Taichi battled back with kicks. A double tag put Takagi and Taka in the ring. Naito kept Taichi at bay while Takagi pinned Taka with a Last Dragon.

Bullet Club (Jay White, Tama Tonga, Tanga Loa, Bad Luck Fale, & IWGP Junior Heavyweight Champion Taiji Ishimori w/Gedo & Jado) IWGP Heavyweight Champion Hiroshi Tanahashi, Kazucika Okada, NEVER Openweight Six-Man Tag Champions Ryusuke Taguchi, Togi Makabe, & Toru Yano) in a 10-Man Elimination Tag Match when Tanahashi eliminated White over the top rope – It is important to note that, while it does seem similar to a Survivor Series match, going over the top rop will still count for an elimination. Tanahashi and White started off the match, with Tanahashi almost immediately trying to eliminate White over the top rope. Bullet Club saved him, and White returned the favor by trying to eliminate Tanahashi over the opposite rope. Taguchi tagged in while Tama hugged everybody at ringside. Hey, he’s a GOOD BOY now. Back in the ring, Ishimori and Taguchi went at it. Jado struck Taguchi in the head with a kendo stick, which lead to a multi-man brawl. when the fighting broke up, Bullet Club started working over Taguchi. Makabe got some offense before climbing to the top for the King Kong Kneedrop. Jado interfered and tossed Makabe off the top. Loa then eliminated Makabe over the top rope. Tama got tossed Jado’s stick and Loa held Yano so Tama could use it. However, Tama tossed the stick out of the ring. Yano capitalized and shived Loa into his brother, and rolled him up for a surprise pin. Still, Bullet Club brought the stick back in and handed it to Tama again. This time, Tama brutally smashed all the babyfaces for a blatant DQ. The damage had been done though, as all the babyfaces laid motionless. White stepped in and pinned Yano with a Blade Runner. The remaining six men brawled on the floor. Tanahashi was the next to get worked on by the heels. Okada got the hot tag and ran wild, even bodyslammed Fale. Fale recovered when Okada tried a piledriver and reversed it into an attempted Bad Luck Fall. The two wound up tumbling to the floor in a double elimination, leaving only two men on each team. Taguchi and Ishimori traded blows on the ring apron, which also ended in both men falling to the floor. That meant it was down to Tanahashi vs. White. Gedo tried to toss Tanahashi over the top, but Tanahashi skinned the cat to get back in. White tried several pinfalls, but Tanahashi wouldn’t stay down. He reversed a Blade Runner into a Twist And Shout. Both men battled back and forth on the apron. This time, Tanahashi hit a Slingblade and only White hit the floor.

After the match, White mercilessly attacked Tanahashi. He grabbed a mic and cut a promo on Tanahashi saying he will win the title in two days.