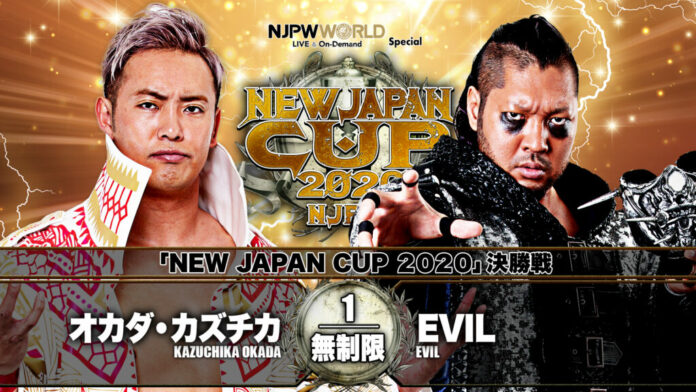 New Japan Pro Wrestling is not only running shows again, but they are running them in front of a paying crowd. Tomorrow’s Dominion is the first major event run by the promotion since the COVID-19 outbreak.

Great Bash Heel (Togi Makabe & Tomoaki Honma) b. Yuya Uemura Yota Tsuji when Makabe pinned Uemura with a German Suplex – As usual, a good showcase of the Young Lions even if it’s a given that they will lose.

Tencozy (Hiroyoshi Tenzan & Satoshi Kojima) b. Jirooki Goto & Gabriel Kidd when Kojima pinned Lidd with a lariat – Kidd got worked over until Goto got the hot tag. After Goto ran wild for a bit, Kidd got tagged back in. He did well for himself until he got flattened by a Kojima lariat and pinned.

Master Wato p. DOUKI with a corkscrew senton – This was Wato’s in-ring debut. It was pretty much all action. The two were evenly matched until Douki took the match to the floor. When the match got back in the ring, Douki was in control. Wato made his comeback and hit is corkscrew senton to get the pin.

After the match, Wato was attacked by Yoshinobu Kanemaru but Hiroyoshi Tenzan made the save.

Yujiro Takahashi & Taiji Ishimori of Bullet Club b. SANADA & BUSHI of Los Ingobernables De Japon when Takahashi pinned Bushi with a Pimp Juice DDT – Surprisingly. neither team attacked before the bell, so we had a pretty straightforward tag match in the opening minutes. That didn’t last long, as Ishimori tried to unmask Bushi. Fortunately for Bushi, he failed. Sanada got the hot tag and soon had Ihsimori in the Paradise Lock. Ishimori then tried to get Sanada in his own Paradise Lock, but again failed. Sanada and Bushi worked over Takahashi, but Ishimori broke the pin. Bushi and Takahashi traded backslides, with Takahashi being able to slip out of one and hit the Pimp Juice DDT for the pin.

Suzuki-Gun (TAICHI, Zack Sabre Jr., El Desperado, & Yoshinobu Kanemaru) b. Yuji Nagata, Ryusuke Taguchi, and IWGP Tag Champions Hiroshi Tanahashi & Kota Ibushi when Desperado pinned Taguchi with a Pinche Loco – This is a preview of sorts for tomorrow’s tag title match. The heels went to work on Tanahashi. Nagata got the hot tag, followed by Ibushi. A multi-man brawl broke out leaving Taguchi alone with Desperado. A Pinche Loco later, and it was all over.

After the match, Sabre and Taichi posed with the belts. Ibushi and Tanahashi hit the ring and drove the heels off before posing with the belts themselves.

Los Ingobernables De Japon (IWGP Heavyweight and Intercontinental Champion Tetsuya Naito, NEVER Openweight Champion Shingo Takagi, & IWGP Junior Heavyweight Champion Hiromu Takahashi) b. CHAOS (Tomohiro Ishii, Toru Yano, & SHO) when Naito pinned Yano with a roll-up – Takagi and Sho started out for their respective teams. Sho managed to ground Takagi and tag in Yano, who did his usual antics. Ishii and Takahashi fought to a double down., which brought everything full circle back to Sho and Takagi. They traded duelling strikes before trading shoulder blocks. A multi-man brawl broke out where the heels disposed of Ishii and Sho. This allowed them to triple-team Yano. Takagi hit a Pumping Bomber, which Naito followed up with an immediate roll-up.

EVIL p. Kazuchika Okada with Everything Is Evil – At first, it looked like the match would start slow with the two feeling each other out. That quickly turned out not to be the case when Evil decked Okada with a lariat and got a two-count with Darkness Falls. Okada escaped an Everything Is Evil attempt and slid out of the ring. Evil chased after him but soon found himself thrown into the barriers. The two continued to fight in and out of the ring until Evil firmly too control by using chairs. Evil continued to work over Okada for the next several minutes. Okada made a comeback and dropkicked Evil to the floor. Now it was Okada’s turn to work over Evil. Okada hit a Tombstone and put Evil in the Cobra Clutch. Evil managed to make the rope break and shove Okada into Red Shoes. He followed up with a low blow on Okada, and with the referee down he brought several chairs into the ring. He then dropped Okada with Darkness Falls onto the chairs. Before Red Shoes came to, Evil managed to clear the chairs out of the ring. After hitting a superplex, Evil tried to go for the kill with Everything is Evil. Okada escaped and started his comeback. After hitting a dropkick, Okada went right back to the Cobra Clutch. Evil resorted to an eye gouge to escape. Okada hit a Shotgun Dropkick that Evil no-sold. However, Okada was able to land the spinning Tombstone and went right back to the Cobra Clutch. Rather than go with the victory with the Clutch, Okada instead hit two straight Rainmakers and again went back to the Clutch. Gedo got on the apron to distract Red Shoes. Yujiro Takahashi hit Okada with a DVD behind Red Shoes’ back. Not sure why Bullet Club is helping LIJ. Evil hit a lariat for a near fall at the 20-minute mark. Okada escaped Everything Is Evil and went back to the Cobra Clutch. Evil nacked into the corner, squishing Red Shoes against the turnbuckles. Yes, a second ref bump. Evil took the opportunity to stomp a low blow. He then lifted Okada for Everything Is Evil and finally got the pin.

After the match, Evil took the mic and called out Naito. They briefly exchanged words before Naito raised his fist for a fistbump. Evil obliged, but instead of a fistbump, he made the Too Sweet symbol and laid out Naito with Everything Is Evil. This brought out the rest of Bullet Club, who were applauding him. The rest of LIJ ran out to make the save and Evil left with Bullet Club. 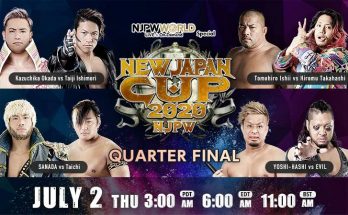