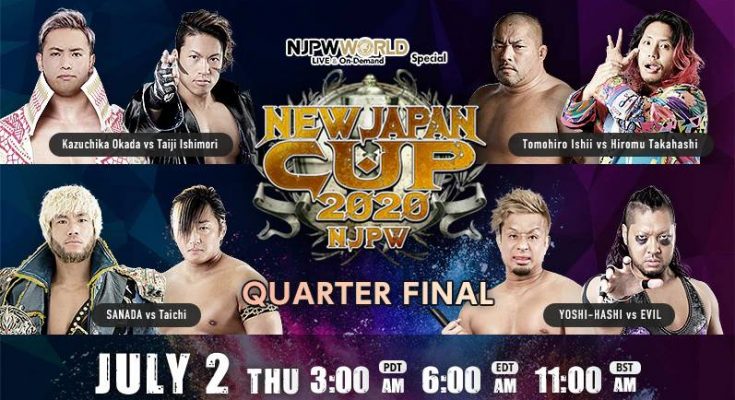 The Quarter-Finals of the New Japan Cup Tournament begin here. We’re down to eight wrestlers remaining from the original 32. There are still a lot of viable possibilities. And given the current situation, it would not be too shocking to see an underdog or dark horse win the entire tournament since crowds will still be sparse when fans are let in.

Hiromu Takahashi p. Tomohiro Ishii – This is an interesting matchup given Hiromu is a Junior Heavyweight and Ishii is built like a tank. Takahashi tried to go on the offensive early but only succeeded in bouncing off Ishii. The two traded chops and strikes, which still didn’t end well for him. Takahashi didn’t get any real offense in until he was able to get some agility moves in. He hit a Falcon Arrow. The two exchanged and reversed several moves, including Takahashi reversing a powerbomb into a hurricanrana. Ishii hit a superplex and a sliding lariat for a two-count. Ishii went for the win with the brainbuster but Takahashi reversed into a small package for another near fall. Takahashi made his comeback and managed to hit some power moves. Ishii managed to kick out of a Time Bomb and tried to make a comeback. However, Takahashi managed to hit an inverted slam that I didn’t recognize to get the pin.

EVIL s. YOSHI-HASHI with a Sasori-Gatame – Evil attacked before the bell and used a chair on Hashi’s leg. The referee checked on Hashi, who was determined to continue the match. Evil locked him in a Sasori-Gatame (Scorpion Deathlock/Sharpshooter). It didn’t look like Hashi submitted, so the referee probably stopped the match.

Los Ingobernables De Japon (IWGP Heavyweight and Intercontinental Champion Tetsuya Naito, NEVER Openweight Champion Shingo Takagi, & BUSHI) b. Hirooki Goto, Sho, & Yuya Uemura when Bushi pinned Uemura with an MX – Uemura started opposite Takagi. Surprisingly, Uemura managed to cut Takagi off and tag in Sho. Takagi and Sho traded a few moves. Then the rest of the heels stormed the ring to clear the babyfaces out. This allowed them to take control of the match and get the heat on Sho. Goto got the hot tag and ran wild on Naito. for a bit until Naito hit a Tornado DDT. Bushi tagged in and fought Goto to a double down. Uemura got the tag and went back and forth with Bushi. A multi-man brawl ensued and when the dust settled, Bushi got the pin with an MX.

After the match, Takagi and Sho had words, implying a NEVER Openweight title match.

Kazuchika Okada s. Taiji Ishimori with a Cobra Clutch – Okada made his entrance from the arena steps. Like Takahashi earlier, Ishimori tried to start out fast. Okada shrugged off the early offense and took control of the match. He knocked Ishimori out of the ring and waited for him to get back in the ring. Gedo appeared from the other side of the ring and distracted Okada. Ishimori took the opportunity to strike from behind. Ishimori then stalked Okada for the next several minutes. Okada made his comeback and hit his major moves. When Okada started to climb the ropes for his Elbow Drop, Gedo again appeared on the apron so Ishimori could strike from behind. Ishimori put Okada in a modified Crossface. Okada escaped by making the rope break and hit a Dropkick. Ishimori reversed a Tombstone into a Codebreaker and seemingly went for the Bloody Cross. Okada reversed into a spinning Tombstone and went for the Cobra Clutch. Ishimori shoved the referee, causing a ref bump. Gedo attacked Okada but was quickly taken out. Okada rallied and hit a second Dropkick before finally locking in the Cobra Clutch to get the win.

SANADA p. TAICHI with an O’Connor Roll – This match started out slow with both men trying to feel each other out. Taichi got the upper hand by taking the match to the floor. Ince the match got back in the ring, Taichi continued to stalk Sanada for several minutes. Sanada made a comeback and knocked Taichi to the floor. He followed up with a plancha, but unlike Taichi, Sanada wouldn’t keep the fight on the floor. Taichi tried to cheap shot Sanada when he was getting back in the ring. Sanada managed to tie up Taichi in the ropes with a Paradise Lock. Once Taichi got broken free, he thumbed Sanada in the eye in an attempt to regain control of the match. Sanada went for a Skull End but Taichi avoided it and hit a back suplex. The two traded finisher reversals until Sanada was finally able to lock in the Skull End. Yoshinobu Kanemaru distracted Red Shoes while Taichi was tapping out. Taichi used a Skull End of his own but Sanada made it to the ropes. The two traded and escaped several of each other’s moves and fought to a double down. Taichi was the first to his feet, and he landed a German Suplex for a near fall. Sanada responded with a hurricanrana for his own near fall. After hitting a TKO, Sanada followed up with another Skull End. Sanada went for the kill with a moonsault, only for Kanemaru to again interfere. While Sanada was distracted, Taichi likewise distracted Red Shoes. In the end, Sanada threw Taichi into Kanemaru, causing him to drop to the floor. Sanada then followed up with an O’Connor Roll to score the pin.