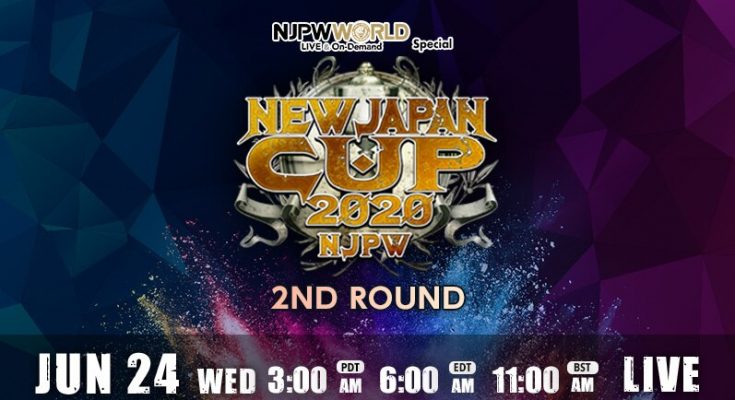 We are officially into Round Two of The New Japan Cup. The original 32-man bracket is down to 16. There were some pretty big upsets, including Taichi beating Hiroshi Tanahashi and

Taiji Ishimori p. Yoshinobu Kanemaru with a Bloody Cross – Kanemaru attacked Ishimori right after Ishimori made it through the curtain. Since both guys are heels, that shouldn’t be surprising. After a brief battle on the floor, Ishimori recovered and took the match into the ring. Kevin Kelly brought up that in 14 matches, Ishimori has never beaten Kanemaru. The best Ishimori has done was a draw. Kanemaru grounded Ishimori and focused on his knee. At the ten-minute mark, Ishimori made a comeback. Kanemaru managed to pull the referee in front of him causing a ref bump. Ishimori than hit a blatant low blow and went for his whiskey bottle. Ishimori blocked by putting his hand over Kanemaru’s mouth and forced Kanemaru to swallow his own whiskey. Kanemaru escaped a few pin attempts but eventually succumbed to the Bloody Cross.

Tomohiro Ishii p. Togi Makabe with a Brainbuster – These guys have faced each other a ton of times and it’s always great because it’s always a hossfight. Ishii controlled the match for the first few minutes before Makabe turned things around with a powerslam. The two traded dueling strikes that staggered both men. Makabe charged and was met with a German Suplex into the turnbuckle. That looked scary. Ishii pounced and focused on Makabe’s neck. The two traded lariats as Makabe made his comeback. Makabe managed to hit Ishii with the Spider German Suplex which ISHII NO SOLD and popped back up. At the ten-minute mark, Ishii hit a superplex. Makabe responded with his own German Suplex but missed the King Kong Knee Drop. Again the two traded strikes and lariats. This time, Ishii came out on top and decked Makabe with a lariat. A Brainbuster later, it was all over.

Ryusuke Taguchi & IWGP Tag Champions Hiroshi Tanahashi & Kota Ibushi b. Suzuki-Gun (Taichi, Zack Sabre Jr., & Douki) when Taguchi pinned Douki with a Dodon – Suzuki-Gun made their entrance, then Kota Ibushi ran out to attack before the bell. The other babyfaces quickly backed him up, with Tanahashi taking the match into the ring with Sabre. It didn’t take the heels long to double-team Tanahashi and get the heat on him. Ibushi finally got the tag and exchanged kicks and suplexes with Taichi. A double-tag out saw Taguchi and Douki go at it. Unfortunately for the babyfaces, Douki gained control over Taguchi as well. This made two straight times the heels cut off the babyface hot tag. A pin by Douki got broken up, which quickly triggered a multi-man brawl that finally saw the babyfaces gain some momentum. Taguchi managed to hit the Dodon on Douki to get the pin.

The heels attacked after the match and not only laid the babyfaces to waste, but the young lions who tried to break the fight up.

Hiromu Tanahashi b. Toru Yano via count-out – As expected, this was all comedy. The backstory is that Takahashi is afraid of Yano due to him being bullied and pummeled by Yano years ago. Takahashi even got his head shaven by Yano when he was still a young lion. He came to the ring wearing a helmet and kept avoiding Yano. Once the referee removed hair clippers from Yano, Takahashi struck from behind. He chased Yano around the floor, only to back off in terror every time he saw clippers or a pair of scissors. Yano managed to tie Takahashi’s and Yota Tsuji’s feet together and clip a part of Takahashi’s hair. Somehow, Tsuji and Takahashi managed to tie Yano’s hands together. They open the nearby elevator and shoved Yano in. After that, the two hobbled together into the ring while the referee administered the 20 count. Obviously, Yano was stuck in the elevator on another floor and couldn’t make the count.

Kazuchika Okada s. Yuji Nagata with a Cobra Clutch – I cannot due justice to this match, since these are two all-time greats. The two spent time in the opening minutes feeling each other out, with neither man getting the upper hand. Okada seemed to take the heel role when he tried his trademark “clean break” and Nagata slapped him. Okada stalled a little on the floor, but when he got back in, he was much of a cocky heel. He taunted Nagata and even tried to pin Nagata with a single foot. Even with Okada’s added aggression, the match was very even for the next several minutes. They battled atop the turnbuckles where Nagata landed a Top Rope Exploder Suplex. Both men had brief times controlling the match, only for the other to counter. Okada landed a Dropkick and a Tombstone. Instead of going for a Rainmaker, Okada went for a Cobra Clutch, which Nagata reversed into a Nagata-Lock. Okada made the rope break. When Nagata went for another Exploder, Okada reversed that into a Cobra Clutch. Nagata escaped with another Exploder Suplex. Okada missed a second Dropkick attempt. They exchanged dueling strikes which only served to fire Nagata up. Nagata hit an enziguiri and went for a Back Drop Driver. This time, Okada managed to escape and clamp-on another Cobra Cluth until Nagata passed out.

After the match, Okada took the mic and cut a brief promo. He then took questions from the press in the ring, probably because there were no fans in attendance.