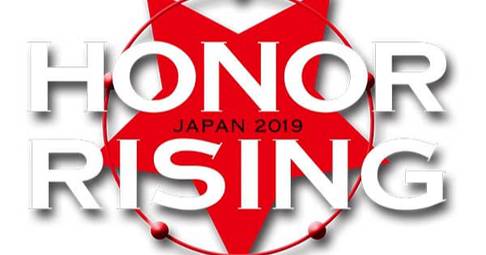 Each year, New Japan teams with Ring Of Honor for the Honor Rising Tour. This year is no exception, and the first two nights are in Japan.

“The Villain” Marty Scurll s. Ren Narita with a Chickenwing – A straight up glorified squash pitting the young lion against a veteran. Narita did mount some offense in the middle, but Scurll in the end won cleanly with the Chickenwing.

Zack Sabre Jr. (w/Taka Michinoku) s. Shhota Umino with a Calf Crusher – Similar to before, only Umino got more offense in than Narita did. He was even able to get Sabre frustrated by escaping several submissions. Umino tried a Fisherman’s Suplex, but Sabre was able t reverse into a Calf Crusher to get the submission victory.

After the match, Sabre continued to attack Umino due to being so embarrassed.

Jyushin Thunder Liger & Jonathan Gresham b. IWGP Junior Heavyweight Champion Taiji Ishimori & Robbie Eagles of Bullet Club when Liger pinned Ishimori with a La Magistral Cradle – This was a real surprise. Gresham and Eagles started out, with Gresham doing his trolling antics to goad Eagles. Then when Eagles would try for a move, Gresham would reverse it. Frustrated, Eagles tagged in Ishimori. Gresham likewise tagged in Liger, who whipped Ishimori into the ropes. Liger than used a La Magistral cradle and got the pin. So Liger pinned the IWGP Junior Heavyweight Champion with a single move. Ishimori was of course furious, but security kept him from attacking Liger afterward.

IWGP United States Champion Juice Robinson, David Finlay, Tomoaki Honma, & Toa Henare b. The Briscoe Brothers (Jay & Mark Briscoe) & The Guerrillas Of Destiny (Tama Tonga & Tanga Loa w/Jado & Hikuleo) when Robinson pinned Mark Briscoe with a roll up – The babyfaces worked well out of the gate until Honma missed a Kokeshi on Mark. This allowed the heels to regroup and get the heat on Honma. Juice & Finlay headed the comeback. Jucie went for Pulp Friction on Mark, who tried to counter with an O’Connor Roll. Jado tried to smack Juice with the kendo stick, but missed and hit Mark instead. Juice then rolled up Mark for the win.

After the match, Mark took a swing at Jado for srewing up the match. This raised the ire of the Tongan brothers, who then turned on The Birscoes and tried to powerbomb Mark. Jay ran in for the save, and the two heel groups yelled at each other that this was BS.

NEVER Openweight Six Man Tag Champions Taguchi Japan ( Ryusuke Taguchi, Togi Makabe, & Toru Yano) b. Delerious, Colta Cabana, & Cheesburger when Yano pinned Delerious with a roll up – The champions worked over Cheesburger until Cabana tagged in to swing the momentum back. All three challengers hit splashed on Taguchi, and all three tried to pin him. The champions still made the save. When Yano tagged in. he of course tried to remove a turnbuckle. Since the turnuckles were ROH turrnbuckles and not the usual large New Japan ones, he got confused and took several seconds to get it loose. Delerious tagged in and went at it with Yano. Cabana for some reason was taking to the referee. While the ref’s back was turned, Yano hit Delerious with a low blow and rolled him up for a pin.

It looked like Cabana did not see the low blow by Yano, as he shook hands with all the champions. This angered Delerious, so he low blowed Cabana and stormed off.

NEVER Openweight Champion Will Ospreay p. Dalton Castle (w/Yota Tsuji and Ren Narita as The Boys) with a Stormbreaker – Dalton Castle’s entrance music sound like a rip-off of Queen’s “I Want It All”, which I say as a compliment. The two men took their time feeling each other out at the beginning, and even started mocking each other’s mannerisms. Castle tried to whip Ospreay into the barrier. Ospreay leaped over the barrier, turned around, and landed a flying forearm back on Castle. He followed that with a Space Flying Tiger Drop. Back in the ring, the match picked up speed with the expected highspots, which Castle was able to reverse or avoid some of them. But Ospreay proved to be too fast, and was able to catch Castle in a Stormbreaker to get the pin

After the match, the two men respectfully shook hands. A great display of sportsmanship.

ROH TV Champion Jeff Cobb p. Hirooki Goto with a Tour Of The Islands – This match was originally supposed to take place at the January event in California, but didn’t due to the travel/Visa issues. It’s also a rematch from a previous event where Goto retained the NEVER Openweight Championship against Cobb. One of the things I like about Goto is that, despite not being a particularly big guy, he can still believably hossfight when he has to, and this match was certainly on of those times. This was a pretty physical match with a good amount of strikes. Cobb even landed a very impressive dropkick. Goto rallied by clotheslining Cobb to the floor. In a strange spot, Goto grabbed one of the young lions at ringside and suplexed him onto the prone Cobb. Back in the ring, Goto took control. Cobb dodged a top rope elbowdrop. Cobb started making his comeback. Goto kicked out of a moonsault and managed to hit Cobb with a Ushigoroshi for a two count. Goto followed up with an inverted GTR, but Cobb kicked out. The finish was Cobb countering Goto into a Tour Of The Island powerslam.

ROH World Champion Jay Lethal, Hiroshi Tanahashi & Kazuchika Okada b. ROH Six Man Tag Champions The Kingdom (Matt Taven, Vinny Marseglia, and TK O’Ryan) when Lethal pinned Marseglia with a Lethal Injection – This was a non-title match. Lethal and Marseglia began the match, though it quickly turned into a multi-man brawl. Ryan demanded Tanahashi face him. Tanahashi obliged and tagged in. The two faced off, with Tanahashi getting dumped to the floor and triple teamed by the heels. Back in the ring The Kingdom manhandled Tanahashi. Okada got the hot tag and took it to Taven. He tagged in Lethal, but before they could do any double teaming Ryan grabbed Lethal’s leg. Okada and Tanahashi were thrown to the floor, leaving Lethal to deal with all three opponents. The Kingdom triple teamed Lethal, and went for Rockstar Supernova. Okada and Tanahashi made the save. Lethal made a quick recovery and hit a Lethal Injection on Marseglia.

After the match, Taven and Ryan attached Lethal. Okada and Tanahashi fended them off, and The Kingdom angrily left. As The Kingdom made their way to the back. Lethal grabbed a mic and said he will beat O’Ryan tomorrow in his title defense.