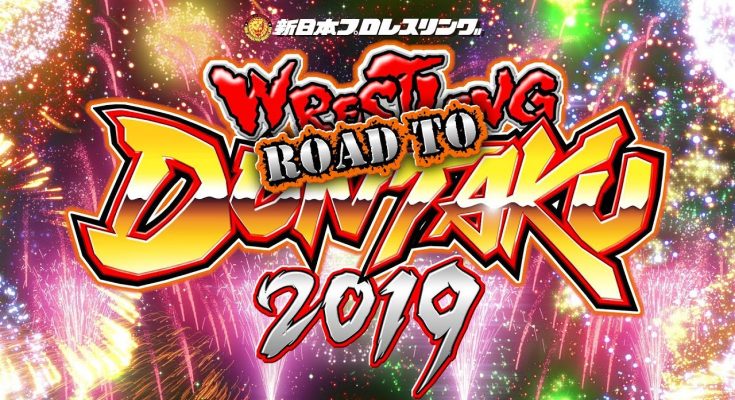 Satoshi Kojima, Shota Umino, & Ren Narita b. Yuji Nagata, Yuya Uemera, & Yota Tsuji when Narita pinned Uemera with a Northern Lights Suplex – The interesting thing about this match is that Kojima and Nagata are a tag team in The Crockett Cup, and are each heading a team against each other here. Tsuji knocked Kojima to the floor, and also managed to knock down all three opponents with shoulder blocks. Kojima cut off Tsuji and hit the Machine Gun Chops. Nagata delivered kicks all around, and got missile dropkicked by Umino. The two vets went at it, with Kojima using the Machine Gun Chops on Nagata. Nagata responded with an Exploder Suplex. A double tag out to Uemera and Narita, which resulted in Uemera using a Boston Crab. Narita made the rope break. Uemera hit a release suplex, which may have gotten the pin had Umino not broken the pin. Narita recovered and hit a Northern Lights Suplex for the pinfall victory.

Suzuki-Gun, now called ZTT (RevPro Undisputed British Heavyweight Champion Zack Sabre Jr., Taichi, & Taka Michinoku) b. Rocky Romero, YOSHI-HASHI, & Tomoaki Honma when Taichi pinned Romero with a Last Ride Powerbomb – This is the third straigh match between these teams. Romero has been saying in post match promos that he is helping get Honma and Hashi on the same page as a team. Honma and Taka started, with Taka quickly going to dirty tactics. Taichi and Romero brawled through the crowd, leaving Taka and Honma in the ring. Sabre tagged in and tied up Hashi. Finally, Taichi and Romero went at it in the ring. Rocky hit a few Forever Clotheslines, but the heels turned the tables and decked him. Taichi went for the Stretch Plum (the way he won the last two matches) but this time Hashi broke the hold. Romero again got several near falls with variations of roll-ups. However, Taichi got the pin, this time with a Last Ride Powerbomb.

After the match, Taichi put Romero in the Stretch Plumb anyway, and the other heels tossed the referee out of the ring.

Suzuki-Gun (Minoru Suzuki, Yoshinobu Kanemaru, & El Desperado) b. Jushin Thunder Liger, Tiger Mask IV, & Ryusuke Taguchi when Kanemaru pinned Tiger with a roll-up – Suzuki brought a pair of MMA gloves in the ring and taunted Liger. He dropped the gloves at Liger’s feet and struck. However, the babyfaces turned it around and dropped Suzuki with a triple dropkick. The match quickly plunged into a brawl on the floor. Back in the ring, Taguchi on his knees tried to strike Suzuki, who wouldn’t take his gaze off Liger. Eventually, the two threw down in the ring, with Liger taking Suzuki to the mat. When the referee tried to intervene, Liger threw him to the mat. Then Suzuki did likewise. Tiger and Kanemaru were left in the ring while everybody else brawled on the floor. Desperado distracted the referee as Tiger hit a Tiger Driver. Liger then went after Desperado, which allowed Kanemaru to spit his whiskey in Tiger’s face. Desperado unmasked Tiger while Kanemaru made the min with a roll-up.

After the match, Suzuki smacked Shota Umino with a chair as he was tending to Liger. Liger hit the ring and cut a promo challenging Suzuki to a fight. The two traded blows again, but had a pull apart brawl.

IWGP US Champion Juice Robinson, IWGP Junior Heavyweight Champion Dragon Lee, & Mikey Nicholls b. Bullet Club (Bad Luck Fale, Taiji Ishimori, & Chase Owens) when Nicholls pinned Owens with a Mikey Bomb – Juice and Chase started, with Juice getting the upper hand until the other heels jumped him from behind. that allowed them to get the heat on Juice. Dragon got the hot tag, and went at it with Ishimori until a double down. Double tag to Owens and Nicholls, who went back and forth until Nicholls managed to catch Owens in a Mikey Bomb.

Hirooki Goto, Togi Makabe, Toru Yano, & Toa Henare b. Bullet Club (Jay White, Tama Tonga, Tanga Loa, & Hikuleo) when Yano pinned Hikuleo with a roll-up – The match erupted at the bell with everybody brawling everywhere. Hikuleo amd Henare were left in the ring, which went well until Jado struck Henare from behind with the shinai. The heels then got the heat on Henare, including a spot where Tama held Henare in a Gory Special while Tanga chopped him. Eventually Goto got the hot tag and quickly cleared the ring so he could go one on one with White. No matter what White tried, he couldn’t keep Goto down until finaly he hit a uranage for a double down. Yano and Hikuleo tagged in, which quickly turned into a multiman brawl. Jado tried to distract the referee, which actually gave Yano the opportunity to low blow Hikuleo and roll him up for the pin.

Los Ingobernables De Japon (Tetsuya Naito, EVIL, & BUSHI) b. IWGP Intercontinental Champion Kota IBUSHI, Tomohiro Ishii, & Yoh when EVIL submitted Yoh with a Sasori-Gatame – Ishii and Evil ran into each other like charging bulls several times, until Evil finally felled Ishii to the mat. Naito and Ibushi battled on the floor as Evil and Ishii continued in the ring. LIJ then got the heat on Ishii (yes, you read that correctly). Ibushi got the hot tag and ran wild over everybody. Naito managed to stop the momentum by hitting a Tornado DDT. Double tag out to Yoh and Bushi, who went back and forth. Evil got the tag and hit Darkness Falls for a near fall. Before he would hit Everything Is Evil, a multi-man brawl broke out with everybody hitting their big moves. Bushi held Yoh so Evil could hit a lariat for a near fall. Bushi then dove on Ishii to keep him at bay while Evil applied a Sasori-Gatame for a submission.

After the match, Naito roughed up Red Shoes, only to give him ice as well.

SANADA & Shingo Takagi of Los Ingobernables De Japon b. IWGP Kazuchika Okada & Sho of CHAOS when SANADA submitted Yoh with a Skull End – Okada and Sanada started out, and battled to a standstill. Then Sho and Takada did the same, until Takagi managed to whip Sho into the guardrail. Takagi was in cotrol for the next few minutes. Sho rallied with a dropkick and got the hot tag to Okada. Takagi DDT’d Okada and tagged Sanada. Again, Sanada managed to get Okada in the Paradise Lock. Okada countered with a neckbreaker. Another double tag out brought Sho and Takagi back in. Sho hit a running lariat, much like Takagi’s own Pumping Bomber, and used a cross armbreaker. Sanada broke the hold, and continued to brawl with Okada on the floor. Takagi hit his own Pumping Bomber and tagged Sanada. Since POkada was laid out on the floor, Sho had nobody to tag to. Still, Sho managed to counter a Skull End into a brainbuster, then hit a German Suplex for a near fall. Sho went for the kill with a Shock Arrow, but Takagi made the save. Sho clotheslined Takagi to the floor. Okada dropkicked Sanada and Dho went for the Shock Arrow again. Sanada excaped again, and ducked a Rainmaker. By this time, Takagi had come to, and prevented Okada from breaking up anything further. Sanada quickly clamped on the Skull End for the submission.

Takagi took the mic and cut a promo on Sho, vowing to win the tag titles. He told Sho that he should be more concerned with keeping the titles than beating him. Sanada then took the mic, and said he’s feeling a little hot tonight, and he will win the title. He then ended in English saying “See you next time”.