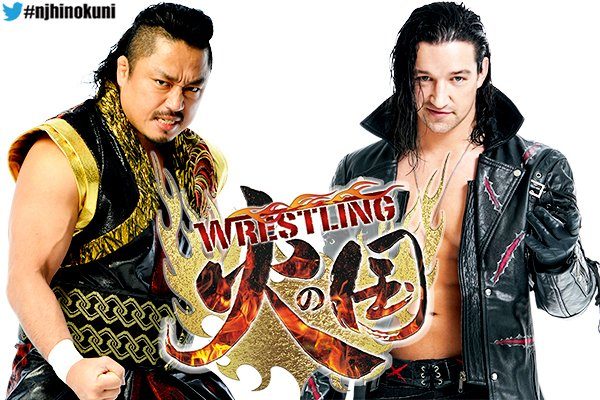 Tomoaki Honma, Shota Umino, & Ren Narita b. Toa Henare, Yuya Uemera, & Yota Tsuji when Umino pinned Uemera with a Fisherman Suplex – In this cas all three men on one side had greater experience than everybody on the other. Team Honma managed to cut off Tsuji and work him over. Henare made a comeback for his team. but when it went back to the young lions, Umino hit the Fisherman Suplex for the win.

After the match, Henare said into the announcers’ mic that he was “close, but a little bit short. People have been telling me that all my life.” It seems there may be a heel turn in his future, which could be interesting.

ROH World Television Champion & NEVER Openweight Champion Jeff Cobb, Jushin Thunder Liger, Tiger Mask IV, YOSHI-HASHI, Ryusuke Taguchi b. Suzuki-Gun (Minoru Suzuki, Taichi, Yoshinobu Kanemaru, El Desperado, & Taka Michinoku) when Cobb pinned Michinoku with Tour Of The Islands – Tiger and Desperado began, and the babyfaces gained control. Taguchi directed everybody to hit Desperado with corner splashes. Then, once again, Taguchi’s plan of ramming opponents into his butt backfired and he found himself alone against the heels. At least he went down fighting, and the heels tossed the babyfaces to the floor. Taguchi managed to free himself with a Hip Attack on Suzuki, and tagged in Liger. the two veterans traded strikes, which ended in a double down. Cobb and Taichi tagged in, and the heels managed to gang up on Cobb. Taichi tried for a belt shot. Taguchi blocked it with Hip Attacks. Soon after, Cobb hit Taka with Tour Of The Islands for the pin.

Will Ospreay & IWGP Junior Heavyweight Champion Dragon Lee b. Taiji Ishimori & Hikuleo of Bullet Club when Ospreay pinned Hikuleo with an Oscutter – It may sound har to believe, but the heels attacked before the bell. They quickly isolated Ospreay and rammed Lee into the guardrail. This allowed them to get the heat on Ospreay. Lee got the tag and ran wild. Hikuleo was able to recover and cut him off, which got a second hot tag to Ospreay. Hikuleo hit Ospreay with a sick looking clothesline. Ospreay kicked out, and hit an Oscutter for the pin.

Bad Luck Fale p. Mikey Nicholls with a Hand Grenade – This is a feud stemming from Nicholls arrival in New Japan. The match however, was mostly one-sided. Fale attacked Juice Robinson after a title defense, and Nicholls ran in for the save. The match began with Fale tossing Mikey around on the floor. Back in the ring, Fale continued his dominance. Nicholls tried a comeback, but collapsed under the weight. Fale then hit a splash and a Hand Grenade to win the match.

IWGP US Champion Juice Robinson p. Chase Owens with Pulp Friction – It was made clear that this was a non-title match that was made out of Juice’s frustrations with Owens’ antics. Though if Owens won, he would get a title shot. A very mat based opening minutes in the match, then picked up speed. Chase would try for the Package Piledriver, but Juice would counter. Juice kept trying to get Pulp Friction, only for Chase to keep countering as well. Finally, juice hit the Left Hand of God, and hit Pulp Friction for the pin.

Los Ingobernables De Japonn (Tetsuya Naito, EVIL, Sanada, BUSHI, & Shingo Takagi) b. IWGP Intercontinental Champion Kota Ibushi & CHAOS (IWGP Heavyweight Champion Kazuchika Okada, Tomohiro Ishii, Sho, & Yoh w/Rocky Romero) when Sanada submitted Sho with Skull End – Okada and Sanada started out. Okada tried to do his clean break, but Sanada immediately went for the Paradise Lock. Okada dodged and hooked up Sanada. A double tag out to Yoh and Shingo Takagi. This quickly spiraled into a multi-man brawl. Eventually, the heels isolated Yoh and worked him over. Ibushi got the hot tag and cleared the ring. Then Ishii got the tag and went at it again with Evil. Things came full circle with Okada and Sanada getting the double tag. Okada hit the elbow and signaled for the Rainmaker. Sanada dodged, but got hit by a dropkick. Sanada ducked another Rainmaker attempt and used Skull End. Yoh broke the hold. Okada dodged a moonsault and hit a shotgun dropkick. Sho tagged in and hit a pair of clotheslines. A German Suplex got a two count. Sho signalled for Shock Arrow, only for Takagi to break it up. Another multiman brawl broke out, but after the fighting settled, Sanada used the Skull End to tap out Sho.

IWGP Heavyweight Tag Champions The Guerrillas Of Destiny (Tama Tonga & Tanga Loa) b. The Most Violent Players (Togi Makabe & Toru Yano) when Tonga pinned Makabe after a roll-up to retain the titles – GOD jumpstarted the match by attacking before the bell. Yano managed to remove a turnbuckle pad and whip Loa into it. The action spilled to the outside where GOD got the upper hand. When the match got back in the ring, they werebeating down Yano. Makabe got the hot tag and ran wild. Even Yano got some offense in before getting tripped by Tonga. Makabe kicked out of Guerrilla Warfare. GOD attemped a Super Powerbomb, but Yano broke it up. Referee Red Shoes got bumped. Loa tried to use Makabe’s chain. Yano gave a low blow to Loa and tossed the chain to Makabe. After using the chain, Makabe hit the King Kong Knee Drop. Loa broke the pin. When Makabe went after Loa he got hit with Jado’s cane. Tonga rolled upMakabe from behind and held the tights for the cheap victory.

Jay White p. Hirooki Goto with a Blade Runner – These two have been going back and forth in tag matches since the G1 Supercard. Goto got the shine out of the gate until Gedo distracted him and White capitalized with a back suplex on the floor. White got teh heat for the next few minutes. Goto made a comeback, however White would keep escaping clothesline attempts. Gedo again distracted Goto, and White again capitalized. Goto escaped a Kiwi Crusher and responded with a discus clothesline that flattened White. When Goto seemingly went for an Ushigoroshi, White countered by backdropping Goto to the floor. White hit a KiwiCrusher for a near fall. White laid in several knees. Goto responded with another lariat. The two exchanged dueling strikes in a kneeling position, then again on their feet. An elevated neckbreaker got a two count for Goto. White lifted Goto for a superplex. Goto countered with a sunset flip off teh top, which looked really scary. White kicked out, and Gedo again went to distract Goto and give White a chance to hit from behind with a chair. However, this time, Goto was ready and dodged the chairshot. Goto followed up with a reverse GTR. White kicked out, and Goto went for another GTR. The two quickly dodged each other’s finishers. White hit two straight Dragon Suplexes,and finally hit the Blade Runner for the win.

After the match, White cut a promo saying Goto let the fans down again.