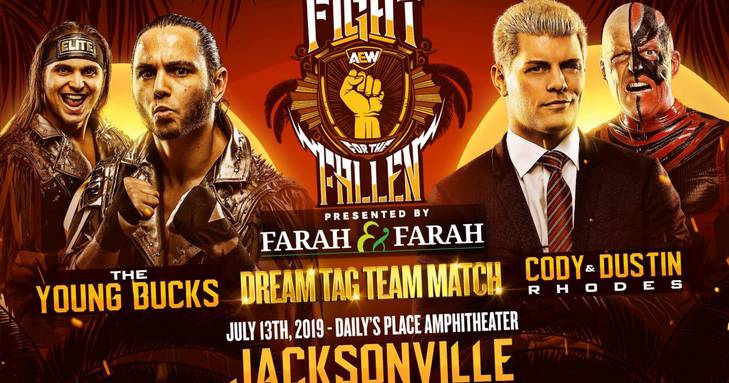 The event is at an outdoor amphitheater, which gives a very unique feel.

Sonny Kiss p. “The Librarian” Peter Avalon w/ “The Librarian” Leva Bates with a Kiss Is It – Avalon tried to cut a promo before the match, only for Sonny’s music to interrupt him. Sonny came to the ring with the Jaguar’s cheerleaders. Avalon controlled most of the opening minutes. However, when Sonny got thrown to the floor, Bates actually helped him to his feet and back into the ring. Avalon seemed upset at this, but it also allowed Sonny to make his comeback and hit is legdrop off the buckles.

The announcers went to the back where the interviewer would talk to Kip Sabien. However, she actually talked to Cody and Dustin Rhodes. They cut babyface promos about there not being a New School.

Shoko Nakajima & Bea Priestly b. Dr. Britt Baker & Riho when Nakajima pinned Riho with a roll-up – Nakajima had “kaiju” in her name, which has me at hello. Excalibur said that Shoko compares herself to Anguiras, who was the first monster Godzilla ever fought. Both teams seemed to show respect and began the match following the rules. Once the referee turned her back to get Baker out of the ring, Nakajima and Priestly showed their true colors and double teamed Riho. The crowd seemed to really get interested when Baker and Priestly were in the ring together. Riho got a two count with a Northern Lights Suplex, and then kicked out of a top rope footstomp. The finish was Riho trying a hurricanrana that Nakajima managed to counter with a roll up.

Backstage, the actual Kip Sabian interview aired. He said Hangman Page was looking past him, and that beating him tonight would make him the first challenger for the title.

Jim Ross made his way to ringside as Boomer Sooner played.

MJF, Sean Spears, & Sammy Guevara Darby Allin, Jimmy Havoc, & Joey Janela when Spears pinned Allin with a Death Valley Driver – The story behind this match is thre three deathmatch style wrestlers were the babyfaces, while the more traditional wrestlers were the heels. Janela hit Guevara with a DVD on the apron for the obligatory big match apron bump. This had the expected big spots, and the right guy won, given the story being told with Cody. I’m just confused as to why MJF is teaming with Spears after coming out looking so concerned after the Cody chairshot.

A video package aired recapping Brandi having her first match, and Allie’s background. After both women made their interest, Awesome Kong’s music aired and Kong came to ringside.

Brandi Rhodes p. Allie with a Spear – Thankfully, the two in the ring still tried to have their match rather than argue with Kong. Brandi played heel after getting control of the match. Allie made her comeback as Kong looked on. Allie had a few words with Kong, which allowed Brandi to get a small package near fall. Allie put Brandi in a Dragon Sleeper, but Kong had the referee distracted so he missed Brandi’s tapout. When the referee came back around, Brandi hit a speaar and got the pin. It certainly seems to be the story that Brandi and Kong have a partnership because this is the second time Kong has came out while Brandi was around.

After the match, Brandi attacked Allie and tossed her into Kong. Kong looked to be going for a power move when Aja Kong’s music hit. So it looks liek we’ll get a Kong vs. Kong feud.

The Dark Order (Uno & Grayson) b. Angelico & Jack Evans and Jungle Boy & Luchasaurus when Grayson pinned Jungle Boy after a Fatality – Uno played big man and taunted the crowd after tossing around Jungle Boy. While Uno worked the crowd, Luchasaurus tagged in. This caused Uno to retreat and tag out. The heels cut off Jungle Boy, which lead to Luchasaurus getting the hot tag. Luchasaurus hit Tombstone-Age on Grayson, but Uno broke the pin. Marko Stunt stopped Evans from double-teaming Jungle Boy with a top rope hurricanrana. For that, the referee ejected Stunt from ringside. Soon afterward, Dark Order hit their finisher called Fatality on Jungle Boy and got the pin.

Adam Page p. Kip Saiban with a Deadeye – Saiban clearly played the heel and controlled the first part of the match. Page hit a discus clothesline to start his comeback. He powerbombed Sabian to the outside onto the stage, which almost caused a countout. Page followed up with a top rope neckbreaker but Sabian kicked out. The two traded a series of roll-ups which Page won by hitting the Deadeye (Inverted Piledriver).

After the match, Chris Jericho came to the ring dressed as a Creeper from The Dark Order.

The Lucha Bros. (Pentagon & Fenix) p. SCU (Frankie Kazarian & Scorpio Sky) when Penatgon pinned Sky after a Spike Package Piledriver – This was a match I was looking forward to quite a bit. The crowd was very much into this match and cheered both teams, even when SCU played heels. Scorpio kicked out of a Canadian Destroyer, but before SCU could regroup, the Brothers hit a Spike Piledriver to get the pin.

Kenny Omega p. CIMA with a One Winged Angel – This was a bit of a dream match for some, and it did feel special. The announcers did a good job of pointing out that Kenny has yet to win a match in AEW. The match started out slow, with each man using the feeling out tactics. The match picked up the pace with each man hitting bigger and higher risk moves. CIMA hit a meteora on the outside while Jenny was on a table. He hit two more back in the ring, but Omega still kicked out. Omega made his comeback and tried a One Winged Angel. CIMA reversed that into a DDT. CIMA then positioned himself with Omega on the apron for the obligatory nig match apron bump. Back in the ring, Omega hit a Tiger Driver for a near fall. When CIMA kicked out, Omega followed up with a One Winged Angel to get the pin.

Jericho made his way back out to the ring and cut a heel promo about still wanting his thanks, and then refusing it when people chanted it. Jericho insulted Hangman until Page ran out and had a pull apart brawl.

A video package aired that showcased the promo Cody cut for Dustin a few weeks back, and how The Young Bucks mocked it on Being The Elite.

The Young Bucks (Matt & Nick Jackson) b. The Brotherhood (Cody & Dustin Rhodes) when Matt pinned Cody with a Meltzer Driver – The Bucks naturally played the heels. They got the heat early before The Rhodes brothers recovered and gained control by cutting Matt off. The Bucks regrouped and managed to lock both Rhodes brothers in Sharpshooters and Figure Fours. The Rhodes brothers made their comeback and hit a Magic Killer on Matt, but Nick broke up the pin. A four-way brawl broke out which caused the referee to get knocked down. With the ref down, Cody and Dustin hit dual Shattered Dreams on The Bucks. Cody tried an axhandle to the outside, but got superkicked and knocked out. This left Dustin alone in the ring to battle both Bucks. When Cody came to, he tagged in. Both teams took each other’s moves with The Bucks hitting Crossroads, and The Rhodes brothers using superkicks. Dustin got knocked to the floor by Nick. With Dustin out of the picture, The Bucks hit a Meltzer Driver on Cody for the win.

After the match, Matt cut a promo putting over The Brotherhood as one of the best teams they’ve been in the ring with. The rest of the roster came to the ring, and Cody presented the charity check.