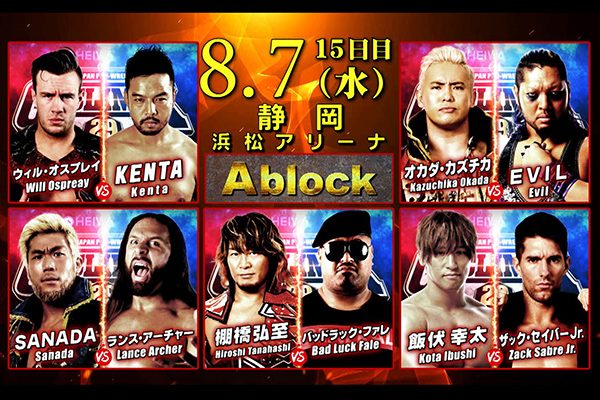 Suzuki-Gun (Minoru Suzuki, Taichi, & Yoshinobu Kanemaru) b. Toru Yano, Yuya Uemera, & Yota Tsuji when Kanemaru submitted Uemera with a Boston Crab – The heels attacked before the bell and bashed Yano and the Young Lions around on the floor. Taichi choked Yano with Kevin Kelly’s microphone and headset cables. Tsuji got singled out in the ring and triple-teamed until Yano got the hot tag and removed the turnbuckle pad. He and Taichi played hot potato with the pad before Taichi decked Yano with it. Uemera tagged in and actually ran wild for a bit before Kanemaru clamped down on him with a Boston Crab and got the submission.

After the match, Taichi tied up Yano with the ring apron.

Hirooki Goto & YOSHI-HASHI of CHAOS b. IWGP US Champion Jon Moxley & Shota Umino when YOSHI-HASHI submitted Umino with a Butterfly Lock – Moxley and Umino set up Hashi for a Hart Attack when Goto yanked Moxley to the outside. They brawled on the floor while Hashi put Umino in the Butterfly Lock for the submission.

Bullet Club (Jay White, Yujiro Takahashi, & Chase Owens) b. Juice Robinson, Tomoaki Honma, & Toa Henare when Owens pinned Henare with the Package Piledriver – Once again, the heels attacked before the bell and took the fight to the floor. By the time everything got back in the ring, they had singled out Honma. Juice got the tag and cleared the ring to stand alone against White, who tagged out at the first opportunity. Henare tagged in as well but fell to a double team. Juice broke the pin and soon brawled on the floor with White. Owens managed to hit the Package Piledriver on Henare to get the pin.

Los Ingobernables De Japon (IWGP Intercontinental Champion Tetsuya Naito, Shingo Takagi, & BUSHI) b. NEVER Openweight Champion Tomohiro Ishii, Jeff Cobb, & Ren Narita when BUSHI pinned Narita with an MX – Ishii and Takagi began while everybody else brawled on the floor. The heels managed to isolate Ishii and triple-team him. Narita tried to defend Ishii and got tossed out of the ring. Double tag out to Naito and Cobb. The heels wore down Cobb until he hit an impressive double back suplex to Naito and Bushi. Narita got the hot tag and ran wild. This led to a multi-man brawl where Bushi hit the MX and got the pin.

SANADA (3-4, 6) p. Lance Archer (2-5, 4) with a roll-up – Archer attacked all the Young Lions at ringside and also attacked Sanada before he got in the ring. Sanada tried to fight back at the five-minute mark and tried a Skull End. Archer countered into an Inverted DDT for a two count. Archer powered Sanada up for a Blackout at the ten-minute mark. Sanada tried a reversal into a Skull End but Archer powered out. Sanada bounced off the ropes and used a bridging roll-up Backlund Style and got the surprise pin.

Bad Luck Fale w/ Chase Owens & Jado (2-5, 4) p. Hiroshi Tanahashi (4-3, 8) with a Backslide – Fale tried to toss Tanahashi to the floor from behind before the bell. Tanahashi skinned the cat and battled back. Jado struck fromo behind with the shinai, and Owens attacked him on the floor as well. The triple-team put Fale in control for the opening minutes. Tanahashi kicked out of a Big Splash and escaped a Hnad Grenade with a Twist & Shout. He hit a Slingblade for a two count and went for a High Fly Flow. Owens distracted the referee and Jado struck with the shinai again. Fale finally hit the Hand Grenade and got a near fall. Tanahashi countered the Bad Luck Fall and tried a Backslide. However, Fale managed to reverse into his own and got the pinfall.

IWGP Junior Heavyweight Champion Will Ospreay (2-5, 4) p. KENTA (4-3, 8) with Stormbreaker – The two went at it right off the bat. Ospreay went for an Oscutter early and missed. The two then decked each other with kicks. Kenta took control with a Stunner-like move to the ropes and battered Ospreay around on the floor. The two got positioned for the obligatory big match apron bump, which for this match was a Falcon Arrow. Ospreay made it in at the count of 19. Kenta hit a Double Stomp for a near fall and tried for the GTS. Ospreay blocked and got hit with the Psycho Knee. The two traded dueling strikes which escalated into dueling holds and reversals. Kenta used Game Over until Ospreay made the rope break, and immediately used the Psycho Knee at the 15-minute mark. Ospreay hit an Oscutter for a two-count and followed up with Stormbreaker for the pin.

Kota Ibushi (5-2, 10) p. Zack Sabre Jr. (3-4, 6) with a Kamigoye – A victory by Sabre would likely eliminate Ibushi from the block, assuming Okada wins tonight. The match was very mat-based in the opening minutes. Sabre started focusing on Ibushi’s leg and taunted him as he kicked it. This angered Ibushi and brought him to his feet. Sabre cut off Ibushi’s comeback and put him in a STF. Ibushi escaped and hit a Powerbomb for a near fall. The two did a fast paced exchange of holds and reversals. Ibushi missed a Boma Ye and escaped several pinning combinations at the 15-minute mark. This time Ibushi hit the Boma Ye for a two count, and followed up with the Kamigoye for the pin.

IWGP Heavyweight Champion Kazuchika Okada (6-1, 12) p. EVIL (4-3, 8) with something like four Rainmakers – It’s “do or die” for Evil, who did beat Okada two years ago. The match started out slow, with Okada knocking Evil to the floor with a basement dropkick being the first big spot. After that, the two threw each other into the railing. But it was Evil who had control when the match got back in the ring. Again Okada managed to knock Evil to the outside and hit a Pescado to the floor. This time, Okada controlled the match upon it getting back in the ring. When the action spilled to the floor a third time at the 15-minute mark, Evil used a chair to halt Okada’s momentum. Back in the ring, Okada hit a dropkick for a double down. The two traded several reversals that saw Evil hit a Rainmaker for a near fall. Okada also kicked out of Darkness falls. Evil tried for Everything Is Evil but Okada reversed and hit two straight Rainmakers. Evil ducked a third Rainmaker and hit a pair of Back Suplexes. Okada ducked a lariat and hit a dropkick at the 25-minute mark. Evil ducked a third Rainmaker but still couldn’t hit Everything Is Evil. Another pair of Rainmakers and Okada finally got the pin.

Okada closed the show with the customary show-closing promo.