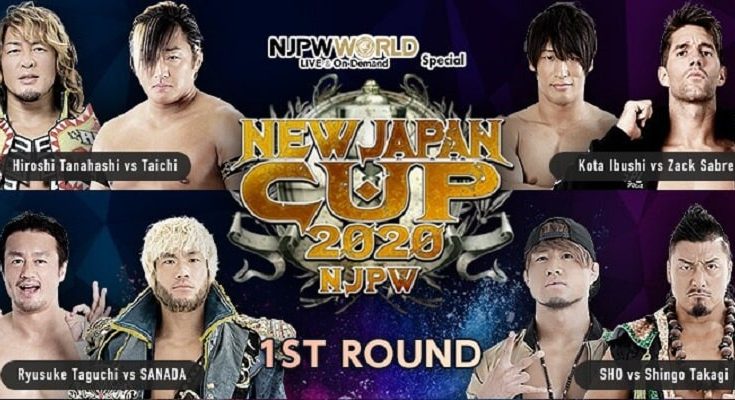 Round One of The New Japan Cup continues with another empty arena show.

Suzuki-Gun (Minoru Suzuki, El Desperado, Yoshinobu Kanemaru, & DOUKI) b. Yuji Nagata, Yota Tsuji, Yuya Uemura, & Gabriel Kidd when Desperado pinned Tsuji with a Pinche Loco – Of course, the heels attacked before the bell because they’re jerks like that. They worked over Uemura until Nagata got the hot tag. During the fray, Tsuji tagged in and a multi-man brawl broke out. Desperado hit Tsuji with the Pinche Loco to get the pin.

SANADA p. Ryusuke Taguchi with a roll-up – The two spent several minutes feeling each other out and trying to out-wrestle each other. Taguchi seemed to get the upper hand and tied Sanada up in the Paradise Lock. Unfortunately for Taguchi, his version of the hols was not as good as Sanada’s and he found himself reversed into the proper version of the hold. Sanada then worked over Taguchi for the next few minutes. Taguchi made his comeback and ran wild for a bit before getting cut off by a Sanada dropkick. The two exchanged submissions with Taguchi reversing a Skull End into an Anklelock. Both men escaped and reverse. But in the end, Sanada was able to pin Taguchi with an O’Connor Roll.

Sho p. NEVER Openweight Champion Shingo Takagi with a Shock Arrow – These two erupted out of the gate with high impact strikes and clotheslines. Takagi wound up taking control after the match spilled to the floor. Sho made his comeback and the two battled over crucifix pins. Finally, the two traded several high impact moves that saw Takagi try a superplex. Sho reversed that into Codebreaker. Sho landed a running clothesline but only got a one-count. Takagi fired up and hit a Made in Japan for a near-fall. Sho also kicked out of a Pumping Bomber. Takagi lifted Sho for a Last Of The Dragon but Sho reversed that into an armlock. Sho then hit a modified piledriver and a Shock Arrow to score the upset pinfall win.

Kota Ibushi p. Zack Sabre Jr with a Kamigoye – As expected, this was a ground-based technical match at the start. Both men tried to out-wrestle each other, with Sabre getting frustrated at his inability to keep Ibushi down. It wasn’t until Sabre avoided a dive and cranked on Ibushi’s ankle on the floor that he gained control. Back in the ring, ZSJ worked over Ibushi’s leg and joints. Ibushi made his fiery comeback. Sabre tried a Penalty Kick that failed to keep Ibushi down. Ibushi responded with a running knee and a Kamigoye to score the pinfall victory.

Taichi p. Hiroshi Tanahashi with a Black Mephisto – When Tanahashi made his entrance and stood on the second turnbuckle, Taichi grabbed him from behind and powerbombed him. Tanahashi rolled to the outside where he was attacked by Douki. Taichi stalked and tortured Tanahashi both in and out of the ring for the next several minutes. Despite Tanahashi’s repeated attempts at a comeback, he was continually cut off by Taichi. Finally, Tanahashi landed a Slingblade for a two-count. He followed up with a High Fly Flow Bodypress. But before he could land the High Fly Flow Frog Splash, Douki blocked his path. Taichi low-blowed Tanahashi and hit the Last Ride Powerbomb. Tanahashi still kicked out and slapped Taichi. Taichi responded with a Back Suplex and an Axe Bomber. Taichi, sensing victory, landed a Superkick and a Black Mephisto to get another upset victory.

After the match, the other Suzuki-Gun heels tried to attack Tanahashi but Kota Ibushi made the save. Ibushi and Taichi had a staredown until Douki attacked Ibushi from behind. Taichi grabbed the Tag Title Belt and flattened both babyfaces with it. This certainly seemed to continue the story of Taichi challenging for the tag titles. Whether it’s with Douki or Zack Sabre Jr. remains to be seen.

Taichi put his foot over both fallen babyfaces and cut a promo, presumably calling them both old and fat.