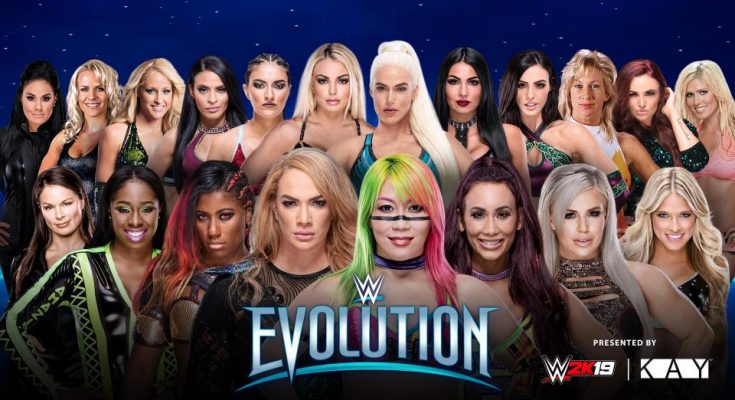 This Sunday night, WWE will run their first major all-female show, Evolution. Naturally, Stephanie McMahon was the one to make the announcement, because WWE seemingly would have you believe that she is this grand innovator of content. You may recall, I criticized WWE for their “Diva Revolution” a few years back, because even then the villainous McMahon was given credit for its existence. If you only started watching WWE, and didn’t know any better, you might be given the impression that Stephanie McMahon somehow created Women’s Wrestling in the first place. That scenario is preposterous, yet par for the course in WWE’s World– oops! Sorry… “Universe”.

To their credit, WWE has improved leaps and bounds in their depiction of women on their roster. Gone are the days of pillow fights, Evening Gown Matches, and all the other catfight-like moments. The champions are called Women’s Champions, not “Divas”. But most of all, the division has gotten far more focused on the in ring action. The annual Mae Young Classic tournament has opened doors for more women to compete in WWE than ever before. Those are all elements I believe fans have been wanting for many years. Could it be better? Of course it could.  NXT still does a better job of depicting women as serious performers, but the progress WWE has made is undeniable.

That said, when the event was announced, it was marketed as “The First Ever All-Women’s PPV”.  They got that wrong by about 25 years. The first ever all-women’s PPV was by the LPWA in 1992. Coincidentally, that show was main evented by the then Terri Power, who would later go on to a WWE run as Tori.

Not only that, TNA/Impact Wrestling has had multiple PPV events solely with female competitors. Though to be fair, they were pre-taped standalone events that had no bearing on the regular programming. And that is not even getting into the many all-women’s independent promotions throughout the world.

However, within WWE there is this narrative that anything outside their branding simply doesn’t exist. It’s just the way they market themselves, and that is not going to change anytime soon.

So why return to this topic when the division has improved so much? Am I really going to be negative on a brand that has improved so drastically in recent years? Simply put, while it has gotten better, there just seems to be a lack of focus on what should be such a historic event. Especially considering the saturation of special events WWE has been putting on lately.

For starters, as Southpaw Josh pointed out on our recent podcast, WWE is promoting no less than four major events in approximately six weeks. With each show running three to four hours, not counting any potential pre-show, that’s approximately 16 hours, or two day shifts for the average American worker. I doubt anybody but the loyalest of die-hard fans would have that much extra time to invest in the product. And when you factor in the respective main events of each show, that number may drop even further.

Case in point, Hell In A Cell was on September 16th and was built around the main events of Roman Reigns vs. Braun Strowman and AJ Styles vs. Samoa Joe. The Super Show Down earlier this month had HHH facing Undertaker in what was advertised as their final match against each other.  That claim would arguably be made false, since one of the billed matches in the upcoming Saudi Arabia Crown Jewel show will be HHH teaming with the returning Shawn Michaels to face (you guessed it) The Undertaker and Mayor Kane. Survivor Series also happens next month, and it is usually marketed as one of the biggest shows of the year.

So what is the main event of the historic all-women’s show in the middle of all these other PPV caliber shows?

Are any Hall Of Famers coming out of retirement? Technically yes, but Trish Stratus and Lita are in an undercard tag match with nothing really worthwhile at stake.

Are there any women who would have an epic match full of action and suspense? While Charlotte Flair and Becky Lynch’s  Last Woman Standing Match will probably wind up being the best in-ring match on the card, they are definitely miscast in their respective roles of hero and villain. Plus Asuka, who is regarded by some as the best in-ring worker of the entire division, will merely be an entry in a battle royal.

Believe it or not, the main event of Evolution will be Raw Women’s Champion Ronda Rousey defending against… Nikki Bella. No disrespect to Nikki, but I find it hard to believe people would  buy her as a threat to Rousey. She is likely regarded by the audience as more as a personality than a main event level wrestler. Especially considering her reality shows on E. Quite frankly, I think she symbolizes everything about the past “Diva Era”. I don’t think that reputation makes for credible opposition to Rousey, who is widely regarded as one of the toughest women in the world even if it is the former UFC champion’s first year in WWE.

To top it off, the programming seems more focused on the Crown Jewel show taking place just a few days after Evolution. This may imply, perhaps unintentionally, that Evolution simply isn’t as important as the other three shows.

I do want the show to perform well, and I will certainly be watching it on the WWE Network. Obviously a highly watched and praised all-women’s would mean more more of them, and more opportunity for other women to find work. But alas, I fear the lack of emphasis on Evolution in WWE’s programming will result in a lack of interest in it. After all, if the company doesn’t seem to care as much about this show as they do others, why should the fans?

I hope I am wrong, and I’ll be pleased if I am.