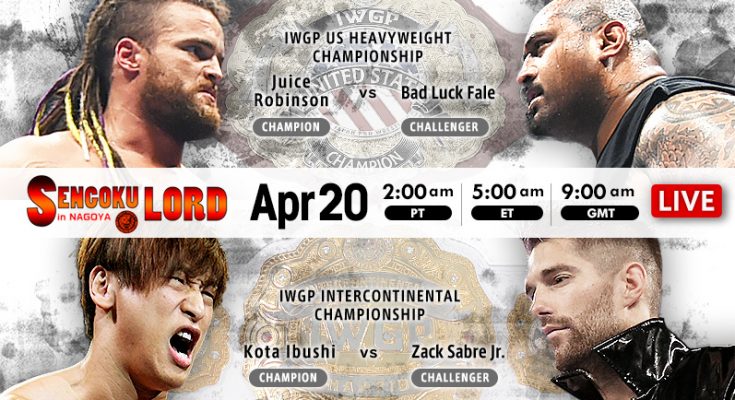 Shota Umino & Ren Narita b. Yota Tsuji & Yuya Uemera when Narita pinned Uemera with a Northen Lights Suplex – Tsuji and Uemera have developed a rivalry on this tour, while Narita and Umino have continued to show that they are the best Young Lions on the roster right now. Umino & Tsuji began, with Umino & Narita showing good teamwork and keeping Tsuji cut off. Uemera eventually got the tag and worked over Umino, until Narita got the tag. Uemera got some near falls, but in the end Narita hit a Northern Lights Suplex and pinned Uemera.

Suzuki-Gun (Minoru Suzuki, Taichi, Yoshinobu Kanemaru, El Desperado, & Taka Michinoku) b. Jushin Thunder Liger, Satoshi Kojima, Yuji Nagata, Tomoaki Honma, & Toa Henare when Taichi submitted Henare with a Stretch Plum – Of course, the heels jumpstarted the match by attacking before the bell. Suzuki demanded to face Liger, who obliged, but soon found himself on the floor with Suzuki throwing stuff on him. This gave the heels the momentum to work over Liger and try to unmask him. Nagata got the hot tag and ran wild. Kojima also tagged in and hit Kanemaru, Depserado, and Taka with Machine Gun chops. Henare hit a delayed suplex on Taichi. This got the multiman brawl going, and while that was going on Taichi hit Henare with a superkick, and locked in the Stretch Plum for the submission.

After the match, the babyfaces licked their wounds and posed in the ring for the crowd.

IWGP Junior Heavyweight Champion Dragon Lee, Toru Yano, & Togi Makabe b. Bullet Club (Tama Tonga, Tanga Loa, & Taiji Ishimori) when Yano pinned Loa with a roll-up – Once again the heels attacked before the bell. This time, Lee and Taiji were left in the ring. Lee quickly overcame Ishimori, and sent him to the floor. When Lee went for a dive, Jado struck from behind with his shinai to stop the momentum. Bullet Club then got the heat by teaming up on Lee. Makabe got his signature hot tag and took the fight to Tama. Yano tagged and immediately removed a turnbuckle pad. Before he could use it to his advantage, the heels were able to stop him. Lee hit a dive to the outside on Ishimori, leaving GOD in the ring with Makabe and Yano. GOD double teamed Yano until Makabe made the save with a double lariat. Yano managed to roll Loa up from behind to get the surprise pin.

Mikey Nicholls p. Chase Owens with a Mikeybomb – Jado struck Nicholls from behind with the shinai before he was able to get in the ring. Owens capitalized and tossed him around on the floor. When the match got into the ring, Owens continued the offense. A desperation DDT gave Nicholls the opening he needed for a comeback. Owens tried for a Package Piledriver, but Nicholls powered out, and turned an irish whip into a Mikeybomb for the three count.

Hirooki Goto & Ryusuke Taguchi b. Jay White & Hikuleo of Bulet Club when Goto pinned Hikuleo with a GTR – White teased starting the match against Goto, but tagged Hikuleo instead. Once Hikuleo had Goto down, White eagerly tagged back in. Goto made a brief comeback, only for the heels to cut him off and take the match to the floor. Back in the ring, the continued to get the heat on Taguchi. Goto got the hot tag and finally was able to get his hands on White. As soon as he could, White tagged the big man back in. Hikuleo hit a powerslam, Goto responded with a clothesline. White tried to sneak up and hit a Blade Runner, but Goto blocked it, shoved White into Jado, and hit an Ushigoroshi. Goto gave Hikuleo one as well, and got the pin with a GTR.

Los Ingobernables De Japon (Tetsuya Naito, EVIL, SANADA, BUSHI, & Shingo Takagi) b. CHAOS (IWGP Heavyweight Champion Kazuchika Okada, Tomohiro Ishii, YOSHI-HASHI, Sho & Yoh) when Naito pinned YOSHI-HASHI with Destino – Takagi and Yoh matched each other nearly move for move. Then Ishii and Evil traded an extended series of dueling strikes. Neither man went down. Next it was dueling shoulder blocks. Neither man went down. Finally, Ishii decked Evil with a running shoulderblock. The babyfaces capitalized and went to work on Evil until Bushi tripped Sho from the outside. This caused the match to spill to the floor, and the heels to get the advantage. The heels went to work getting the heat on Sho. Okada and Sanada got the respective tags and went at it. They work so well together. Then Bushi and Yoh did the same. Bushi dodged a 3K attempt and hit a double hurricanrana. Naito got the tsg, but soon found himself at the center of all the babyfaces. Hashi hit a lariat for a near fall. The heels broke the pin and tossed the babyfaces out. A triple team on Hashi allowed Naito to hit Destino and get the pin.

After the match, Evil and Ishii had a pull-apart brawl.

IWGP United States Champion Juice Robinson p. Bad Luck Fale with a Pulp Friction – Fale attacked before the bell. Juice made the mistake of trying to slam Fale early on, and got clotheslined to the floor as a result. Fale tossed Juice around outside the ring and rammed him into the ringpost. Fale continued the assault in the ring for the next several minutes. Juice made a comeback, and hit the cannonball. Juice tried another slam, but collapsed under the weight for a near fall. At the 15 minute mark, Fale hit a Hand Grenade, which Juice barely kicked out of. Fale went for the kill with the Bad Luck Fall. Juice escaped and hit the Left Hand Of God. A flying bodypress finally knocked Fale off his feet. Another Left Hand Of God, and Juice was finally able to hit the bodyslam. After that, Juice was able to get the pin with a Pulp Friction.

They have almost an hour for the main event.

IWGP Intercontinental Champion Kota Ibushi p. Zack Sabre Jr. w/Taka Michinoku with a Kamigoye – Zack tried to keep Ibushi grounded with holds. Ibushi managed to escape and knock Sabre to the floor. While outside the ring, Sabre gained control and started working on Ibushi’s neck. Ibushi made his comeback with strikes and dropkicks. Sabre managed to reverse a moonsault into a triangle choke. Ibushi escaped, and the two started a battle of holds, reversals, and pinning combinations. Sabre regained control of the match, but then started taunting Ibushi. This fired Ibushi back up, and resulted in Ibushi landing kicks of his own. Ibushi hit a powerbomb. Sabre hit a Zack Driver for a double down. As they made their way to their feet, both men traded dueling strikes. Ibushi tried a deadlift German Suplex into the ring. Sabre blocked, and got hit with a kick. Sabre ducked a Boma Ye. Ibushi hit a Last Ride Powerbomb for a two count. Sabre reversed a Kamigoye into an Octopus Hold. Ibushi escaped and landed the Kamigoye for the pin. Very good match that went a good 30 minutes or so.

After the match, Tetsuya Naito made his way to the ring and said he had Ibushi’s next challenger. However, Naito looked to the entrance ramp and saw nobody walked out. With that, Naito formally issued the challenge. Ibushi took the mic and said “Si”, accepting the challenge.