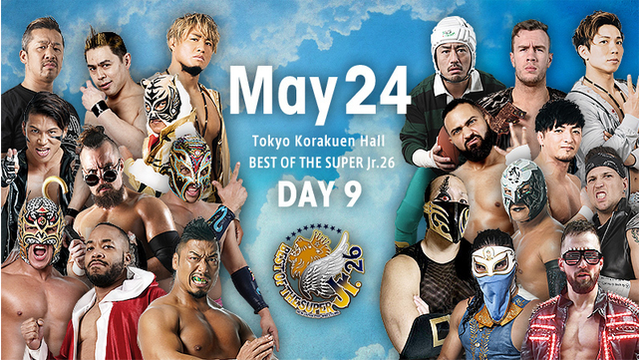 We have officially entered the latter half for the Best Of Super Juniors 26. Only two men enter the second half undefeated: A Block’s Shingo Takagi and B Block’s El Phantasmo. That said, it’s still almost anybody’s tournament… except of course Taka Michinoku or Ren Narita’s…

Anyway, there are at least two potential challengers for Dragon Lee’s Junior Heavyweight Championship in Taiji Ishimori and Shingo Takagi, as they have both pinned the champion. It’s also worth mentioning how amazing some of the matches have been involving Will Ospreay, Rocky Romero, Titan, and Takagi. I hope we get an Ospreay/Takagi match someday.

SHO (2-3, 4) p. Tiger Mask IV (2-3, 4) with Shock Arrow – This was a do-or-die match for both men, because they are both stuck at 4 points apiece. Tiger took the early advantage with strikes and kicks. Sho kicked out of a Tiger Driver, and reversed a Tiger Suplex attempt into a piledriver. Sho made his comeback, landed a huge clothesline, and finished off Tiger with a Shock Arrow.

Will Ospreay (4-1, 8) p. Ren Narita (0-5, 0) with an Oscutter – Even in the face of an impossible win, Narita fought with all his heart. That has been the story of Narita in this tournament. The biggest moment was when Ospreay tried a plancha to the floor on Narita, who got out of the way. Ospreay landed on his feet, then tried to rush Narita, who countered with an overhead belly-to-belly suplex on the floor. That almost got Narita a countout victory. The fact that Narita got so many surprising near falls has made all his matches interesting.

After the match, Ospreay applauded Narita and shook his hand as he layed getting iced.

Marty Scurll (2-3, 4) p. Yoshinobu Kanemaru (2-3, 4) with Black Plague – Kevin Kelly called this match Spy vs. Spy, which I thought was a hilarious and accurate comparison. Kanemaru immediately tried to attack before the bell. Both men stood with their respective weapons (umbrella and whisky bottle). They put down their weapons, and proceeded to brawl through the crowd. Back in the ring, Kanemaru yanked the referee in front of him, so Scurll shoulderblocked the referee into oblivion. Kanemaru then hit a DDT and got a visual pinfall on Scurll. While Scurll gathered his bearings, Kanemaru grabbed his whisky. Scurll blocked the spit with his umbrella. The roles then got reversed as Scurll spit whisky into Kanemaru’s eyes as the referee tried to remove the weapons. A Black Plague later, and Scurll got the pin.

Robbie Eagles (3-2, 6) s. (DOUKI 1-4, 2) with a Ron Miller Special Leglock – The second straight heel vs. heel match. Eagles got busted open very early. He put Douki in a leglock (Ron Miller Special, Kevin Kelly called it) and used the Turbo Backpack. Douki kicked out, but soon got put back in the Ron Miller Special. This time, Douki submitted.

Shingo Takagi (5-0, 10) p. Taka Michinoku (0-5, 0) with Last Of The Dragon – Chris Charlton noted that Taka gave Shingo one of his first breaks in wrestling. Surprisingly, Taka came out swining with a vengeance, and used the Figure Four around the ringpost. Then he hit a moonsault to the outside. Not only that, he put Shingo in a crossface on the floor until the ref made his count to 13 on the countout. Takagi barely escaped the countout, and immediately got rolled up into several La Magistrals. Finally, Takagi fired up, and nailed the Last Of The Dragon to get the win.

Bandido (2-3, 4) p. Ryusuke Taguchi (4-1, 8) with a 21-Plex – Taguchi repeatedly whipped Bandido into the ropes until Bandido got exhausted. Bandido then hyped up the crowd to let Taguchi show his rope running rope running skills, and promptly hit a superkick when he did so. The next few minutes saw Bandido control the match. Taguchi made his comeback with Hip Attacks. The two traded roll-ups and near falls. Bandido hit a GTS, followed by a 21-Plex and got the pinfall.

Taiji Ishimori (4-1, 8) p. Jonathan Gresham (2-3, 4) with a Bloody Cross – This is another do-or-die match. This time it’s for Gresham. If he loses, he is mathmatically eliminated from winning the block. They matched each other almost move for move and hold for hold. Ishimori clamped on the Yeslock. Gresham escaped and tried a comeback, but Ishimori cut him off and hit the Bloody Cross for the win in a short, but very good match.

BUSHI (2-3, 4) p. YOH (3-2, 6) with a MX – Bushi attacked before the bell and took control almost immediately. Yoh made a comeback and targeted Bushi’s right knee. Bushi kicked out of a Falocn Arrow, and a Bridging German Suplex. Bushi retaliated with two straight Codebreakers and a Canadian Destroyer. Aho still managed to kick out, but fell to the MX.

IWGP Junior Heavyweight Champion Dragon Lee (3-2, 6) p. Titan (2-3, 4) with Desnucadora – Both men are masked luchadores. Dragon came to the ring with a mask and handed it to Red Shoes, who actually put it on. All three posed in the ring in their masks with a Mexican flag. Red Shoes even refereed some of the match while wearing the mask. The crowd did not like it when he took it off after a few minutes. The match quickly escalated into a battle of strikes, kicks, and throws. The two did dueling strikes atop the turnbuckles, which Dragon won. He hit the stomp while Titan was in the Tree Of Woe. Titan reversed a Desnucadora into a Blue Thunder Bomb, but Lee kicked out. Lee battled back, and finally hit the Desnucadora for the pin.

Rocky Romero (1-4, 2) s. El Phantasmo (5-0, 10) with a Cross Armbreaker – Rocky was already mathmatically eliminated, but he still fought hard. After all, he could still play spoiler and keep ELP from winning the bracket. Rocky jumpstarted the match by taking it to Phantasmo immediately. They fought through the crowd where Phantasmo targeted Rocky’s knees, which had been worked on through most of the matches. Phantasmo worked over Romero for the next several minutes. Rocky made his comeback, and focused on Phantasmo’s arm. Rocky hit an awesome combo of Tornado DDT/Falcon Arrow/Cross Armbreaker in one fluid motion. Phantasmo escaped, but Romero responded with a Sliced Bread, followed by the Forever Clotheslines. ELP used an airplane spin, which caused Rocky to roll to the floor. Romero almost got counted out, and when he slid in the ring, Phantasmo tried a frog splash. Rocky dodged at the 25 minute mark and hit a lariat for a near fall. Romero hit another Sliced Bread, but when Romero kicked out, it flopped Rocky onto Red Shoes. ELP low blowed Romero and rolled him up. Rocky still kicked out, and battled back with several rapid fire reversals for near falls. At the final minute warning, Rocky finally managed to lock in the Cross Armbreaker and get the surprising submission. A very happy ending to an excellently worked match that told the story of the grizzled veteran having one more big win in him.

After the match, Romero cut a promo about three straight nights with three straight sellouts. SHO, YOH and Ren Narita came out to congratulate him. And a good time was had by all.