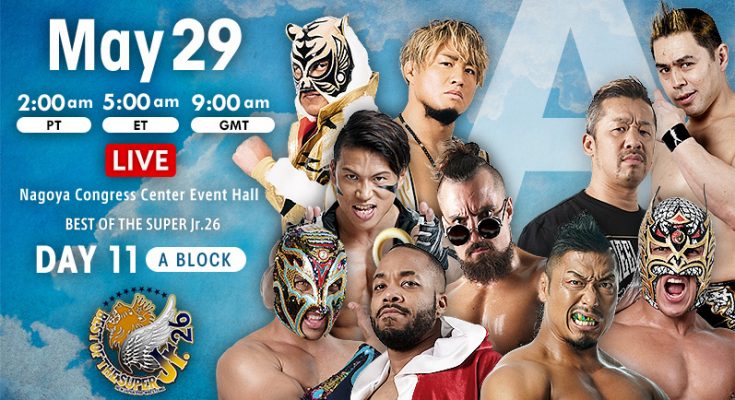 We are in the final stretch of the 2019 Best Of Super Juniors. Only two men have a shot at winning A Block, while B Block has a lot more possible winners. The format also has returned to focusing on only one block on each night, with the other block entrants get previewed in tag matches.

Taka Michinoku was forced to forfeit the tournament due to injury. This means he will finish with zero points. His would-be opponents, Marty Scurll and Yoshinobu Kanemaru, will each receive two points and sit out those matches as well. Though it’s possible they may show up for run-ins.

Tomohiro Ishii & YOH of CHAOS b. Ren Narita & Yota Tsuji when Ishii submitted Tsuji with a Boston Crab – The Young Lions actually got a couple near falls on Ishii, and Tsuji managed to escape submissions from Ishii. Ishii won the match with a particularly painful looking Boston Crab.

IWGP US Champion Juice Robinson, Ryusuke Taguchi, Bandido, & Yuya Uemera b. Bullet Club (El Phantasmo, Robbie Eagles, Gedo, & Jado) when Robinson pinned Gedo with a Pulp Friction – The heels isolated Uemera and beat on him until Taguchi ran wild with Hip Attacks after a hot tag. Juice continued the momentum and decked both Gedo and Jado with the Left Hand Of God. A Pulp Friction later, and Juice got the pin for his team.

NEVER Openweight Champion Taichi & DOUKI b. Will Ospreay & Shota Umino when Taichi pinned Umino with a Superkick – The heels attacked before the bell, and quickly took the match to the floor. Back in the ring, they double teamed Umino. Ospreay cleaned house upon getting tagged in. Umino tagged back in and got Taichi in a Cross Armbreaker. Douki broke the pin and brawled with Ospreay on the outside. Meanwhile, Taichi nailed Umino with a superkick and pinned him.

After the match, Douki attacked Ospreay with his pipe, possibly injuring him.

Tetsuya Naito & BUSHI b. Rocky Romero & Toa Henare when Naito pinned Henare with Destino – The heels cut off Henare, and worked him over until Romero got the tag. Bushi and Romero battled to a double down, which led to the double tag out to Naito and Henare, respectively. Bushi managed to knock Rocky out of the ring, and helped Naito double team Henare. Naito then hit Destino on Henare for the pinfall.

The rest of the matches for the show will be A Block tournament bouts.

SHO (2-5, 4) p. Titan (2-5, 4) with a Shock Arrow – The two ment went back and forth, with neither getting the upper hand until Titan hit a dive to the outside. He followed up with a springboard bodypress into the ring, then grounded Sho with a Figure Four. Sho made the rope break, and fought back with strikes. Again Titan grounded Sho, this time with a Cross Armbreaker. Sho escaped that an hit a piledriver for a two count. All it took after that was a Shock Arrow for Sho to get the pin.

Taiji Ishimori (6-1, 12) s. Tiger Mask IV (2-6, 4) with a Yeslock – Ishimori jumped Tiger before the bell, but Tiger was ready for him and quickly cut him off. Tiger tried to end it early with a Tiger Driver. Ishimori kicked out, so Tiger immediately followed up with a Cross Armbreaker. Ishimori escaped and halted Tiger with knee strikes. He followed up with a Yeslock for the submission.

Regardless of what happens tonight, if he beats Takagi in their match, Ishimori will win the A Block.

If Takagi loses tonight, he can still win the A Block by beating Ishimori. If he wins, then all he has to do is get a time limit draw with Ishimori to win.

Shingo Takagi (7-0, 14) p. Jonathan Gresham (4-3, 8) with Last Of The Dragon – Takagi controlled the match in the first few minutes. Gresham made a comeback and hit a dive to the floor. He then applied a sleeper on the floor until the count of 17. Takagi still managed to beat the count, though Gresham continued to stay on the offense and got several near falls. Takagi hit a Death Valley Driver. Gresham still managed to kick out of a Noshigami and a Pumping Bomber. Takagi went for the kill with a Last Of The Dragon. Gresham reversed and put Takagin in an Octopus Hold. Takagi powered out of it, and reversed into the Last Of The Dragon and got the pin.

Whoever wins the match between Ishimori and Takagi will win A Block.

IWGP Junior Heavyweight Champion Dragon Lee (5-2, 10) Yoshinobu Kanemaru (3-5, 6) with Desnucadora – Kanemaru attacked before the bell, and ran Dragon into the ringpost, and the chairs at ringside. Back in the ring, Kanemaru continued the attack. Lee made a comeback with a dropkick to the floor, and hit a dive to the outside. Kanemaru hit a Tornado DDT, and then hit a reverse DDT in the apron for the obligatory big match apron bump. Dragon countered the Deep Impact with a knee strike, and lifted Kanemaru for the Desnucadora. Taichi grabbed Red Shoes and dragged him to the floor. With Red Shoes down, Kanemaru yanked off Lee’s mask, and tried to use his whisky. Dragon countered with a kick, and put the mask back on. Kanemaru went for the win with a moonsault, but Dragon kicked out. Lee knocked Taichi to the floor, and finished off Kanemaru with the Desnucadora.

After the match, Dragon cut a promo in Spanish, presumably thanking the crowd.