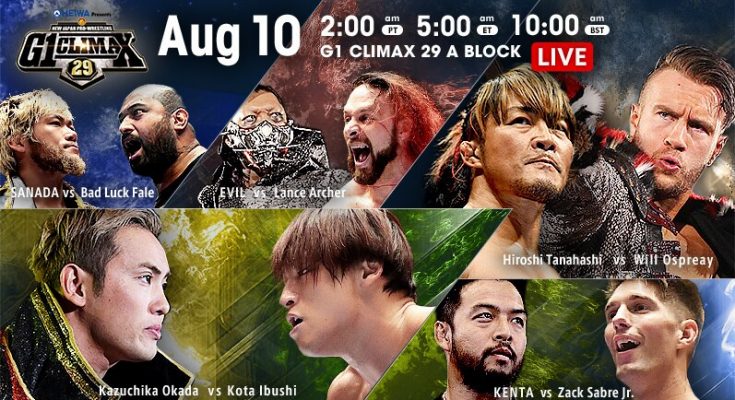 Tonight is the Finals of the A Block. Unlike the B Block, there are only two men still able to win. As luck, or booking in this case, would have it, both men are in tonight’s main event. It’s Okada va. Ibushi for the A Block Championship.

IWGP US Champion Jon Moxley & Shota Umino b. Juice Robinson & Ren Narita when Umino pinned Narita with a Fisherman Suplex – Juice and Moxley are fighting tomorrow, so naturally the heat was between them. The two veterans went back and forth, as did the Young Lions. Moxley and Umino hit a Hart Attack on Narita and Umino followed up with the Fisherman Suplex to get the pin.

After the match, Moxley chop-blocked Juice and put him in a Figure-Four.

Jeff Cobb & Toa Henare Toru Yano & Tomoaki Honma when Cobb pinned Honma with Tour Of The Islands – Honma got cut off after missing a Kokeshi. A double tag out to Cobb and Yano saw Cobb hit a German Suplex after Yano removed the turnbuckle pad. Then Honma was able to hit the Kokeshi. Henare and Yano fought on the floor while Cobb hit Tour Of The Islands on Honma and pinned him.

Suzuki-Gun (Minoru Suzuki, Taichi & Manabu Nakanishi) b. CHAOS (NEVER Openweight Champion Tomohiro Ishii, Hirooki Goto, & YOSHI-HASHI) when Suzuki pinned HASHI with the Gotch Piledriver – The heels attacked before the bell and managed to cut off Goto. Ishii got the tag and traded strikes with Taichi. Goto and Hashi double teamed Suzuki, which led to a multi-man brawl where Suzuki managed to hit the Gotch Piledriver on Hashi to get the pin.

After the match, Taichi attacked the referee and stomped him.

Los Ingobernables De Japon (IWGP Intercontinental Champion Tetsuya Naito, Shingo Takagi, & BUSHI b. Bullet Club (Jay White, Yujiro Takahashi, & Chase Owens) when Takagi pinned Takahashi with Made In Japan – Bushi got cut off and worked over. Naito got the tag and battled White to a double down. A double tag to Shingo and Yujiro. LIJ triple-teamed Yujiro which allowed Takagi to hit Made In Japan and get the pin.

Lance Archer (2-6,4) p. EVIL (4-4, 8) with the EBD Claw – Archer attacked every Young Lion he saw on his way to the ring. The two broke into fisticuffs right off the bat. Archer hit a Black Hole Slam that sent Evil to the floor. Archer followed up by somersaulting onto Evil and all the Young Lions he previously beat up. Back in the ring, Archer removed the turnbuckle pad and suplex Evil onto the exposed metal. Evil rebounded with a Superplex for a two-count. The referee got knocked out by Archer’s leg. With the ref down, Archer brought a chair into the ring and set it up in the corner. Archer kicked out of a Magic Killer and hit a chokeslam for a two-count. After hitting an F5, Archer went for the EBD Claw. Evil dodged at first but still got caught in it and pinned.

After the match, Archer refused to break the hold. Several Young Lions ran into the ring to pry him off Evil.

Bad Luck Fale w/Jado & Chase Owens (3-5, 6) p. SANADA (4-4, 8) with a Small Package – Owens caught Sanada’s attention and Fale attacked from behind. Out of the floor, Fale choked Sanada with a microphone cable. Both Owens and Jado took their shots behind the ref’s back as well. Fale grounded Sanada with several nerve holds. Sanada made his comeback and dropkicked Fale out of the ring. He then hit Pescados on all thee men. Sanada tried to lift Fale for a TKO, but the mass was two great and he collapsed under the weight. Fale hit a Splash and a hand grenade but couldn’t get the pin. Sanada escaped a Bad Luck Fall and managed to bodyslam the big man. He hit an impressive TKO for a near fall. Then Sanada put on the Skull End. Before the referee could notice the tapout, Owens tanked the referee out of the ring. Jado got in the ring to interfere. Sanada caught him and put him in the Paradise Lock. Then Owens tried to interfere and Sanada did the same to him. With both Owens and Jado tangled up< Sanada went for the kill with a moonsault on Fale. Fale dodged and used a small package reversal to pin Saada. This marks the third match where Fale won a match with a clean wrestling move.

In a humorous moment, Fale noticed both Jado and Owens still tied up in Paradise Locks. He freed Jado, and the two left the ring, leaving Owens alone. After a minute they turned and freed Owens too.

Zack Sabre Jr. (3-5, 6) s. KENTA (4-4, 8) – The two locked up and Sabre made the clean break when they got in the corner. When Kenta had the chance to return the favor, he took a shot with a kick. While Sabre ducked, it clearly did not go over well with the crowd. Kenta took control with his kicks and clearly took the heel role. Sabre countered with his extensive use of holds. At the ten-minute mark, Sabre hit a Northern Lights Suplex that transitioned in an armbreaker. Though Kenta made it to the ropes, Sabre continued to focus on the arm and shoulder. Kenta rallied and hit a Double Stomp for a two count. Sabre escaped a GTS and used a Penalty Kick, only for Kenta to kick out at one. After a flurry of strikes exchanged, Sabre rolled Kenta up with a bridge. Kenta kicked out and resorted to kicks and knees. He lifted Sabre for the GTS, only for Sabre to reverse into a submission. Kenta found himself unable to escape and submitted.

IWGP Junior Heavyweight Champion Will Osprey (3-5, 6) p. Hiroshi Tanahashi (4-4, 8) with a Stormbreaker – It looked like the two would take the cautious feeling out approach, but Tanahashi struck early with dragon screw leg whips. He followed up with a Deathlock that he turned into a bridge. Ospreay retaliated with a flip kick off the ropes and hit a flip dive to the floor. Back in the ring, Ospreay missed a flying forearm and his leg buckled when he landed. Tanahashi focused on the leg and clamped on the Cloverleaf. Ospreay made the rope break and made a brief comeback. Tanahashi managed to reverse an Oscutter into a Slingblade. Ospreay kicked out so Tanahashi tried another Slingblade. This time Ospreay countered it into a Spanish Fly. Ospreay hit a 450 splash and an Oscutter but failed to get the pin. Tanahashi countered s Stormbreaker with a Slingblade. Another Slingblade got a two count. Now it was Tanahashi’s turn to go to top. Tanahashi hit the High Fly Flow Bodypress which Ospreay rolled through and nearly got the pin. Ospreay followed up with a Stormbreaker to finally get the pin.

Kota Ibushi (6-2, 12) p. IWGP Heavyweight Champion Kazuchika Okada (7-1, 14) with a Kamigoye – The match started out with both men trying to feel each other out. Okada dropkicked Ibushi off the top to the outside and DDT’d him on the floor. Ibushi slowly made his way into the ring to beat the count. Okada struck as soon as Ibushi got in the ring. For the next several minutes Okada had control and Ibushi didn’t get much sustained offense. Okada slammed Ibushi and climbed the rope for the Savage Elbow. Ibushi roared to life and et Okada at the top. However, Okada was able to knock Ibushi off the top to the apron. Ibushi retaliated with a top rope hurricanrana. Before Ibushi could get in position for the Kamigoye, Okada popped up and hit a few strikes, followed by a dropkick. Okada tried for his Tombstone Piledriver, but Ibushi countered into his own piledriver. At the 20-minute mark Okada hit a Shotgun Dropkick which Ibushi no-sold and responded with a lariat. Again the two reversed Tombstones, but this time neither hit it and Okada hit two straight Rainmakers. Ibushi ducked a third Rainmaker and hit a Back Suplex. Without letting go of Okada’s wrists, Ibushi positioned himself for a Kamigoye. Okada escaped and tried for another dropkick. Ibushi reversed it into a powerbomb for a near fall. Ibushi tried a Boma Ye, only for Okada to hit another dropkick. Okada tried for a Spinning Rainmaker which Ibushi ducked and finally hit the Kamigoye. Okada kicked out, so Ibushi hit one more for good measure and got the pin.

After the match, Ibushi took the mic and cut the customary show-closing promo.