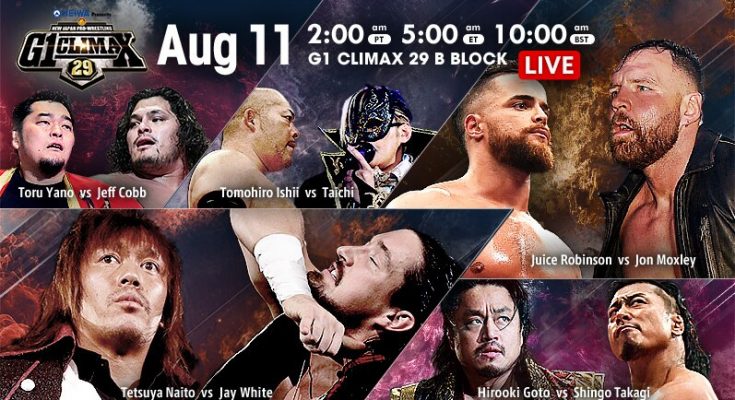 The final day of Block competition is here. Kota Ibushi has won the A Block after defeating IWGP Champion Kazuchika Okada last night. Unlike the A Block, B Block has multiple possibilities for winners. Including, of all people, Toru Yano! Though that admittedly is HIGHLY unlikely.

Shota Umino & Ren Narita b. Yota Tsuji & Yuya Uemera when Narita submitted Uemera with a Boston Crab – Another great showcase of Young Lions. Mainly Tsuji squared off against Umino while Narita faced Uemera. Uemera fought for several minutes in the Boston Crab before finally getting moved to the center of the ring where he tapped out.

Bullet Club (Bad Luck Fale, Yujiro Takahashi, & Chase Owens w/Tokyo Latiina) b. Los Ingobernables De Japon (EVIL, SANADA, & BUSHI) when Takahashi pinned BUSHI with a Pimp Juice DDT – Of course, the fight broke out before the bell and spilled to the floor. By the time the match got back in the ring, Evil was singled out for the heat. Sanada got the hot tag and put Takahashi and Owens in Paradise Locks. LIJ triple-teamed Takahashi which led to the multi-man brawl. Bushi kicked out of a Fisherman Buster but fell to the Pimp Juice.

Kota Ibushi, Tomoaki Honma, & Toa Henare b. KENTA, Clark Connors, & Kyle Fredericks when Henare pinned Fredericks with a Uranage – Honma got cut off after missing a Kokeshi. Kenta mockingly kicked him and taunted him. Ibushi got the tag and fought Ketna to a double down. A double tag out to Henare and Fredericks led to Henare getting double-teamed. Henare rallied with a Rugby Tackle and got the pin with a Uranage.

IWGP Heavyweight Champion Kazuchika Okada, IWGP Junior Heavyweight Champion Will Ospreay, Hiroshi Tanahashi, & YOSHI-HASHI b. Suzuki-Gun (Minoru Suzuki, Lance Archer, Zack Sabre Jr., & Yoshinobu Kanemaru) when Tanahashi pinned Saber with a cradle – The heels attacked before the bell and took the match to the floor. They cut off Hashi for the heat. Okada got the hot tag and ran wild for a bit until Archer stopped him with a shoulderblock. Archer tried to double chokeslam Okada an Ospreay but got double dropkicked. Tanahashi and Sabre tagged in, and Sabre quickly placed Tanahashi in several submission holds. Hashi broke up a pin which caused the obligatory multi-man brawl. During the ruckus, Sabre tried to use an armbreaker on Tanahashi, but Tanahashi reversed it into a pinning combination to get the pin.

Jeff Cobb 3-5, 6) Toru Yano (4-4, 8) with Tour Of The Islands – before the match the referee found three rolls of tape in Yano’s tights. Yano demanded that Cobb be searched too, but when the referee went to do so, Yano rolled Cobb up from behind. When Cobb kicked out, Yano tangled him up in his own singlet. Cobb still managed to kick out. Yano pleaded that he was sorry and offered a handshake. When Cobb obliged, Yano tried to squeeze his hand. This failed and Cobb instead squeezed Yano’s hand. Yano then removed some turnbuckle pads, which of course backfired and Yano wound up being whipped into them. Cobb then finished Yano off with Tour Of The Islands.

TAICHI w/ Miho Abe & Yoshinobu Kanemaru (3-5, 6) p. NEVER Openweight Champion Tomohiro Ishii (4-4, 8) with Black Mephisto – Taichi surprising jumped on offense right away rather than do his usual escape from the ring. He tried to get several early pins but failed. Ishii made his comeback and hit a huge Superplex. They traded dueling strikes until Taichi hit a back suplex for a near fall. Before Ishii could counter, Taichi hit several strikes and hit Black Mepisto to score the pin.

Juice Robinson (3-5, 6) p. IWGP US Champion Jon Moxley w/Shota Umino (5-3, 10) with Pulp Friction – This is a rematch from two months ago where Moxley won the title from Juice. Moxley right away went after Juice’s hurt knee. At the five-minute mark, Moxley put him in a Cloverleaf. Juice escaped by biting Moxley’s earing off. Juice started a comeback and knocked Moxley out of the ring. Moxley tried to set up a table when Juice did a cross body onto the floor. Juice then put the table back under the ring. Juice hit a high crossbody that clearly hurt his leg, so he couldn’t make the cover. Moxley went to submissions to keep Juice down. Red Shoes checked Juice during an STF and was about to stop the match when Juice showed some life. Moxley grabbed more chairs and tables and put them in the ring. Juice sprang to like and hit the Pulp Friction.

Shingo Takagi (3-5, 6) p. Hirooki Goto (5-3) with Last Of The Dragon – Takagi grounded Goto in the opening minutes. Got knocked Takagi to the floor. Takagi tried to get Goto to follow him out, but Goto did not. Back in the ring Goto stayed on offense. Takagi hit a Noshigami at the ten-minute mark. The two traded clotheslines with neither man going down. Goto hit an ushigoroshi for a near fall. Takagi escaped a second Ushigoroshi and hit Made In Japan for a two-count. Goto also kicked out of a Pumping Bomber. Takagi landed several strikes and got a headbutt in return. Goto hit a Reverse GTR two which Takagi responded with a Pumping Bomber. Takagi hit a second Pumping Bomber for another near fall. Finally, Takagi finished off Goto with Last Of The Dragon.

Jay White w/Gedo (5/3, 10) p. IWGP Intercontinental Champion Tetsuya Naito (5-3, 10) with a Blade Runner – There was no physical contact at the bell because White immediately went to the floor. Naito chased him around and back into the ring. White tried to escape a second time but this time Naito caught him. They traded a few moves before White knocked Naito to the floor. After whipping Naito into the barricade, White tossed Naito back in and continued the assault. Naito made a comeback and grounded White with holds. White countered with a Flatliner. Naito reversed a Kiwi Crusher into a DDT. White smacked White and the referee together, causing a ref bump. Gedo attacked from behind with knucks only to get hit with a low blow. White managed to use a Back Suplex to stop Naito’s momentum at the 15-minute mark. White kicked out of Destino. White countered a second Destino into a Sleeper Suplex. White lifted Naito for a Blade Runner, but the two wound up doing a bunch of reversals and counters that saw White hit another Suplex. He followed up with an Implant DDT and a Blade Runner to get the pin.

After the match, White cut the customary show-closing promo gloating about his win and that he is in the finals. He called out Ibushi, who came to the ring. He said they’d be one-on-one and offered a handshake. This implied that White wouldn’t bring Gedo with him. Ibushi accepted the handshake but was too quick to fall for White’s cheap shot attempt. White backed off and grinned. Gedo tripped up Ibushi from behind, which distracted Ibushi long enough for White to attack. White blasted Ibushi’s leg with a chair.