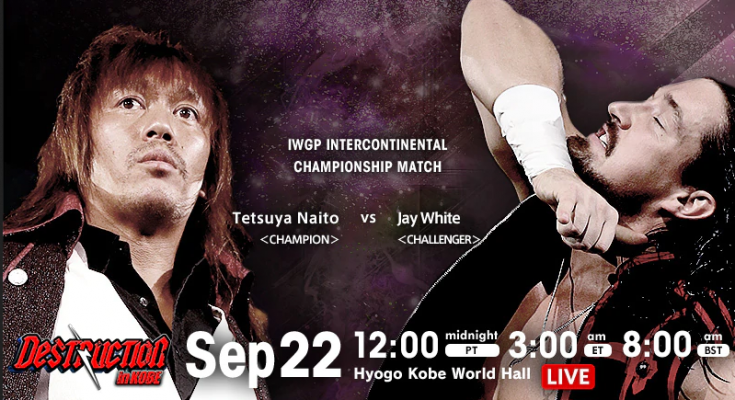 The final night of New Japan’s Destruction Tour will see the crowning of the Young Lions Cup winner, and will also have Tetsuya Naito defending the Intercontinental Championship against Jay White.

Yuji Nagata, Yuya Uemera, & Yota Tsuji b. Manabu Nakanishi, Michael Richards, & Alex Coughlin when Tsuji submitted Coughlin with a Boston Crab – Fun six-man opener with the highlight being Uemera hitting an impressive bodyslam on Nakanishi. Tsuji and Coughlin traded dueling strikes, with Coughlin getting the upper hand. Coughlin put Tsuji in a Boston Crab but Tsuji made the rope break. Tsuji retaliated with a spear and a powerslam. The pin got broken up, which lead to a multi-man brawl. With everybody else brawling on the floor, Tsuji used a Giant Swing on Coughlin and turned it into a Boston Crab to get the submission.

Clark Connors s. Ren Narita with a Boston Crab – Narita hit his Overhead Belly-To-Belly for a two-count. Connors kicked out and put Narita in a Boston Crab for a submission victory. This eliminated Narita from winning the Cup.

Karl Fredericks s. Shota Umino with a Half Crab to with the Young Lions Cup – The winner of this match will win the cup. A lot of mat-based wrestling with Fredericks trying to keep Umino grounded. Umino tried to use his speed to stay ahead. Fredericks caught him and reversed into a Half Crab. Umino tried for the rope break, only for Fredericks to drag him back in. Umino submitted, giving the victory and the cup to Fredericks.

Bullet Club (Bad Luck Fale, Yujiro Takahashi, & Chase Owens) b. Togi Makabe, Tomoaki Honma, & Toa Henare when Owens pinned Henare with a Package Piledriver – Honma hit a bulldog on Takahashi and followed up with a Kokeshi. The heels got the heat on Honma until Makabe got the hot tag. Fale and Makabe battled to a double-down. Owens and Henare got the double-tag. Henare hit Forever Clotheslines on Owens and Takahashi in opposite corners. Fale broke the pin, which caused a multi-man brawl to break out. Henare and Owens remained in the ring while everybody else brawled on the floor. Owens hit the Package Piledriver on Henare to get the pin.

After the match, Owens went to the announcer’s table and issued a challenge to The ROck & Roll Express for the Fighting Spirit Unleashed tour.

Suzuki-Gun (Minoru Suzuki, Zack Sabre Jr., Yoshinobu Kanemaru, & DOKI) b. Jyushin Thunder Liger, Hiroshi Tanahashi, Rocky Romero, & Tiger Mask IV via DQ – The match never truly got started, because Liger attacked Suzuki from behind during his ring entrance. Everybody brawled on the floor and in the ring. Suzuki pulled out a table and a chair. He broke the table of Liger’s head and tried to unmask him. Liger escaped by low-blowing Suzuki. Liger then removed his own mask to reveal the facepaint of KISHIN LIGER! Liger spat mist on Suzuki and the referee. Liger ran at Suzuki with a spike. Suzuki dodged and Liger drove the spike through the table. Suzuki, for the first time I can recall in a very long time, ran away.

CHAOS (Tomohiro Ishii, YOSHI-HASHI, IWGP Junior Heavyweight Champion Will Ospreay, Sho, & Yoh) b. Bullet Club (Tama Tonga, Tanga Loa, NEVER Openwight Champion KENTA, IWGP Junior Tag Team Champions Taiji Ishimori & El Phantasmo w/Jado) when Yoh pinned Loa with a roll-up – The match spilled to the floor early. By the time it got back in the ring, Bullet Club was in control and getting the heat on Hashi. Ospreay got the hot tag and ran wild. Yoh then tagged in and held his own against the GOD brothers. Ishii and Ospreay did some unique teaming against Ishimori and Phantasmo. GOD hit Guerrilla Warfare on Yoh, but Hashi broke the pin. GOD then tried a Magic Killer, but Sho kicked Loa away. Yoh then rolled Loa up and got a pin. That’s the second time R3K have gotten a pin on GOD.

Los Ingobernables De Japon (EVIL, SANADA, & BUSHI) b. Kota Ibushi, IWGP Heavyweight Champion Kazuchika Okada, & Robbie Eagles when SANADA submitted Eagles with a Skull End – Eagles got cut off and worked over until Ibushi got the hot tag. Okada tagged in next and traded blows with Sanada. Eagles tagged back in and tried to finish Sanada off. Evil and Bushi stepped in and triple-teamed Eagles. Ibushi and Okada tried to intervene but were thwarted while Sanada got the submission with a Skull End.

Hirooki Goto p. Shingo Takagi with a GTR – These two have been at odds since the G1, and this is their first singles match since then. If you like Strong Style matches with a lot of striking, this was for you. The two went toe-to-toe with neither man getting any sustained momentum, including both men no-selling each other’s lariats and suplexes. Even when one hit a big move, the other would kick out and hit one of his. Goto kicked out of a Reverse GTR and hit his own GTR. Goto kicked out of a Pumping Bomber and hit a Shoten Kai. However, Goto was too exhausted to make the cover. The two got to their feet and Goto hit a Ushi-Gorousi/GTR combo move. When that didn’t get the pin, Goto finally hit a GTR to get the pin.

Jay White p. IWGP Intercontinental Champion Tetsuya Naito with a Blade Runner – This match was fast-paced in the opening minutes with each man escaping each other’s moves. White got the advantage by taking the match to the floor. He dominated for the next several minutes. Naito made his comeback about 15 minutes in. The two battled on the apron for the obligatory big match apron bump. White went for a piledriver but Naito backdropped his way out. White then powerbombed Naito on the apron. Back in the ring, Naito reversed a Kiwi-Crusher into a DDT which cased a double-down. The two rose to their feet and exchanged strikes. At the 25 minute mark, White managed to distract Red Shoes so Gedo could flatten Naito with a chair. White Followed up with a Kiwi-Crusher for a two-count. Naito escaped a Blade Runner and hit a Flying Forearm. Naito tried to finish White off with Destino, only for Gedo to get on the apron for a distraction. However, Naito didn’t fall for it and managed to it a Tornado DDT on White while kicking Gedo off the apron. White thwarted several Destino attempts while Naito escaped the Blade Runner several times. In the end, White was able to reverse a suplex attempt into a Blade Runner to finally put Naito down.

After the match, White mocked Naito and the crowd. He claimed to be the one that sold out Madison Square Garden and that he will be a dual champion. Hirooki Goto got into the ring and decked White with a punch. White and Gedo made their way to the back with White claiming Goto won’t get a title shot. Goto took the mic and made the challenge.