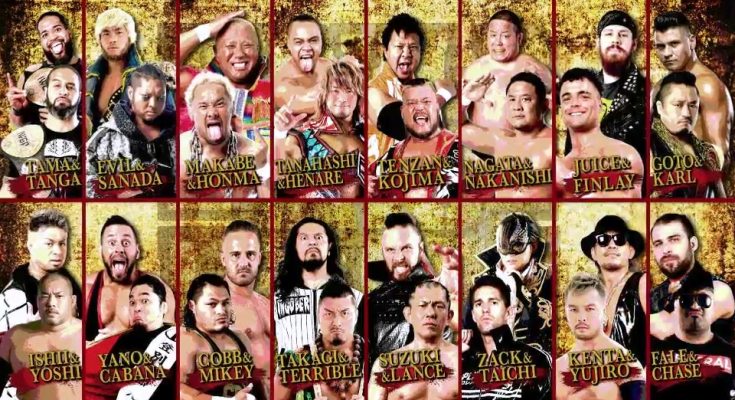 New Japan’s final tour of the year is here with World Tag League. Much like the other tournaments, this is contested in a round-robin format, with the winners getting a shot at the IWGP Tag Team Champions. In the unlikely event that the champions win, they get to select their #1 contenders. This year’s Tag League boasts a larger bracket than usual, with 16 teams in a single bracket, rather than the usual A and B Blocks.

Here are the teams in this year’s Tag League

Obviously, some of these entries are not going to win. Especially those involving Young Lions, or guys on the lower end of the card. However, there are at least four strong contenders to win. EVIL & SANADA could three-peat, GBH have already won twice, and the champions winning is always a possibility.

That said, my pick to win is the team of Juice Robinson and David Finlay. The two tore it up during last year’s G1 when they would team, but an injury prevented them from participating in Tag League last year. Plus, Juice had the US Title feud with Cody. This very well could be their year.

Jeff Cobb & Mikey Nicholls b. Toru Yano & Colt Cabana when Cobb pinned Yano with Tour Of The Islands – A lot of the expected comedy from Yano & Cabana, with much of it centered around them being afraid of Cobb. They also wrestled as the heels with the usual turnbuckle removals. Yano got cut off and worked over until Cabana for the hot tag. Both men did Yano’s antics at the same time during the comeback. But in the end, Yano got caught in a Tour Of The Islands by Cobb and pinned.

Hiroyoshi Tenzan & Satoshi Kojima b. El Terrible & Shingo Takagi of Los Ingobernables De Japon when Kojima pinned Terrible with a Lariat – This match was my introduction to El Terrible. When I heard Terrible was added, I presumed it was either to be somebody to take the pin, or somebody to be unleashed and made into a major player. This looked like it was the former. That said, what I saw was impressive and he held his own against the legends. In fact, the Lariat that Kojima used to pin Terrible was used as a counter.

NEVER Openweight Champion KENTA & Yujiro Takahashi of Bullet Club b. Yuji Nagata & Manabu Nakanishi when Takhashi pinned Nakanishi with a Pimp Juice DDT – As expected, the heels cheap shotted to start the match. They got the heat on Nakanishi, then Nagata got the hot tag. Nakanishi tagged back in, but again got double-teamed. A Pimp Juice DDT later and it was all over.

Minoru Suzuki & US Champion Lance Archer of Suzuki-Gun b. Bad Luck Fale & Chase Owens of Bullet Club when Archer pinned Owes with the EBD Claw – As expected, the brawling began before the bell and quickly spilled to the floor. Owens got double-teamed before a double tag out to Archer and Fale. After the hossfight, Owens tagged back in. However, he failed to get the Package Piledriver on Archer. Suzuki managed to use the Rear Naked Choke which allowed Archer to use the EBD Claw to get the pin.

In a non-tournament match, IWGP Intercontinental Champion Jay White & Gedo of Bullet Club b. Tetsuya Naito & BUSHI of Los Ingobernables De Japon when Gedo pinned Bushi after a Bladerunner – BUSHI managed to knock Gedo to the floor but White cut him off before he could do a dive. This gave Bullet Club the advantage and they brawled around the floor before taking the match back to the ring. They got the heat on Bushi until Naito got the hot tag and ran wild for a bit. After Naito hit a Tornado DDT on White, a double-tag out brought Bushi and Gedo back in. This time, Bushi managed to hit his dive onto Gedo. A four-way brawl broke out, with Bushi hitting an MX on Gedo. However, Whtie broke the pin and hit a Bladerunner on Bushi. So Gedo made the pin while still being knocked out.

Hiroshi Tanahashi & Toa Henare b. Great Bash Heel (Togi Makabe & Tomoaki Honma) when Tanahashi pinned Honma with a High Fly Flow – With the last two matches being heels vs. heels, it was a little refreshing to see faces vs. faces done here. It was also worth noting that Henare teamed with Makabe last year, which makes this match-up all the more interesting. Honma managed to take Henare down and went for a top rope Kokeshi. Tanahashi intercepted and stopped him. Henare came to and hit a Samoan Drop off the middle rope before tagging in Tanahashi. The two did a cool double team where Henare swept Honma’s leg while Tanahashi did a Slingblade. Honma still managed to kick out but soon got pinned by a High Fly Flow.

Tomohiro Ishii & YOSHI-HASHI of CHAOS b. RevPro Undisputed British Heavyweight Champion Zack Sabre Jr. & Taichi of Suzuki-Gun when Ishii pinned Taichi with a Brainbuster – The heels tried, and failed, to get the heat on Ishii in the opening minutes. it wasn’t until they teamed up with kicks on Ishii that they managed to fell him to the mat. Taichi got a two count with a powerbomb before doing his pants-ripping theatrics. This fired up Ishii and brought Hashi into the mix as well. In the ensuing brawl, Sabre managed to put Ishii in a guillotine. Hashi hit a backbreaker from behind and followed up with a Kumaroshi on Taichi. ishii hit a sliding lariat for a two count, then got the three count with a brainbuster.

I don’t think Hashi was ever the legal man in the match.