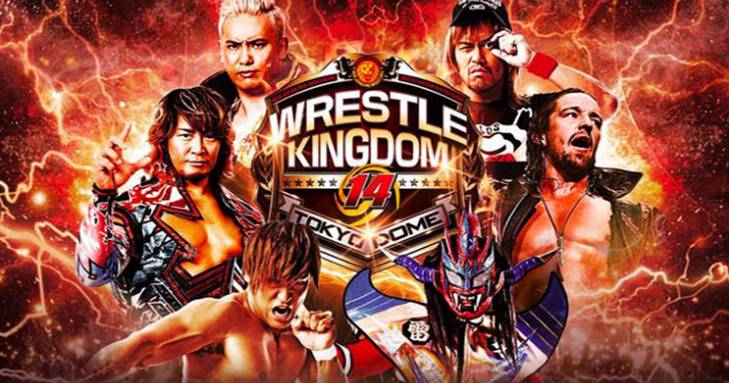 January 4th is upon us, which means New Japan’s biggest show of the year is as well. As most New Japan fans know, January 4th is the date for WrestleKingdom. Even before it was called WrestleKingdom, the event has been promoted as their biggest event and has been held in the world-famous Tokyo Dome.

This year, WrestleKingdom will be a two-day event. No official reason has been given, but none is really needed either. Not only could it be additional tickets sold, but it could also mean two three-hour shows as opposed to one six-plus hour show.

In any case, WrestleKingdom is a two-day event. Night One will be headlined with an IWGP Heavyweight and IWGP Intercontinental Championship matches. The winners of those respective matches will meet in Night Two to determine the first-ever double champion. Also, the legendary Jyushin Thunder Liger will wrestler the final matches of his career.

Togi Makabe, Tomoaki Honma, Yuya Uemura, & Yota Tsuji vs. Toa Henare, Alex Coughlin, Clark Connors, & Karl Fredericks – Coughlin, Connors, and Fredericks have been in the LA Dojo, while Uemura and Tsuji are breakout graduates of the New Japan Dojo. Fredericks won this year’s Young Lion’s Cup. Traditional logic in Young Lion Matches is the established star wins. In this case, Makabe is probably getting the pin with the King Kong Knee Drop.

Satoshi Kojima & Hiroyoshi Tenzan vs. Manabu Nakanishi & Yuji Nagata – The combined age of all these wrestlers almost hit 200. This won’t be any match of the year candidate, but it will probably be entertaining.

Jyushin Thunder Liger, Tatsumi Fujinami, The Great Sasuke, & Tiger Mask IV w/ El Samurai vs. Ryusuke Taguchi, Tatsuhito Takaiwa, Shinjiro Ootani, & Kaoki Sano w/Kuniaki Kobayashi – Yes, you read that correctly, Tatsumi Fujinami is wrestling in this match. If I understand Japanese wrestling philosophy the retiring person seldom gets the win though. So I expect Liger’s team to not only lose but for Liger to take the pin.

Los Ingobernables De Japon (SANADA, EVIL, BUSHI, & Shingo Takagi) vs. Suzuki-Gun (Minoru Suzuki, Zack Sabre Jr. El Desperado, & Taichi) – Sabre is the Revolution Pro Undisputed British Heavyweight Champion and will defend the title the next day against SANADA, so it wouldn’t be too surprising to see his team get the win. Contemporary American logic (ie, WWE) would have the person winning the title be the person getting pinned in this match. Plus, I think there may be a few ongoing stories over these two nights, and one of them involves LIJ establishing dominance. While that is not necessary for them to win this match to establish that, it would certainly help.

CHAOS (Hirooki Goto, Tomohiro Ishii, Toru Yano, & YOSHI-HASHI) vs. Bullet Club (KENTA, Bad Luck Fale, Yujiro Takahashi, & Chase Owens) – Another tag match made of talent that will be involved in title matches on the second night. Much like the previous match, there is a title match on night Two involved. Here it is Goto challenging KENTA for the NEVER Openwight Championship. And again, like the previous match, the challenger will likely look strong on Night One

IWGP HEAVYWEIGHT TAG TEAM CHAMPIONSHIP: The Guerrillas Of Destiny (Tama Tonga & Tanga Loa)(c) vs. Juice Robinson & David Finlay – FinJuice, or whatever their official name is, won the World Tag League last month, which earned them this title match. Traditionally, the World Tage League winners capture the title at WrestleKingdom. This may be the year where that streak is broken. More on that later.

TEXAS DEATH MATCH FOR THE IWGP US CHAMPIONSHIP: Lance Archer(c) vs. Jon Moxley – Moxley was forced to relinquish the title a few months back due to an MRSA infection. Archer then defeated Juice Robinson to win the vacated title. This, of course, means that Moxley was never defeated for his title and deserves a rematch. While Archer has definitely exceeded expectations as a singles champion, the story is with Moxley and Juice.

IWGP Junior Heavyweight Championship: Will Ospreay (c) vs. Hiromu Takahashi – This goes all the way back to 2018 when Takahashi broke his neck during a title defense in the United States. Again, like Moxley, Takahashi had to vacate the title and was never beaten for it. In his absence, Ospreay has arguably become the greatest Junior Heavyweight Champion of the last several years. This one will likely be nothing short of a MOTY Candidate where hopefully neither guy gets severely injured.

IWGP Intercontinental Championship: “Switchblade” Jay White (c) vs. Tetsuya Naito – Naito started the “double champion” talk last year while he was Intercontinental Champion. More wrestlers began expressing their desire to be both the IC and World champion, and the decision was made to have IC and World Title Matches on Night One, with the respective winners facing each other on Night Two, Winner Take All. One of the stories that tend to play out with New Japan is when somebody proclaims what they want to do, he winds up accomplishing it. In order for Naito to be a double champion, he first needs to win one.

IWGP Heavyweight Championship: Kazuchika Okada (c) vs. Kota Ibushi – This is one of those matches with literally no bad outcome. Ibushi is on the brink of superstardom and is one of the top babyfaces. Okada is nothing short of the greatest wrestler in the world at the moment. With the winner take all stipulations, either man is a worthy contender to take home all the gold. That said, It is, in my opinion, unlikely that New Japan would have somebody win the IWGP Title for only one night.

GAUNTLET MATCH FOR THE NEVER OPENWEIGHT 6-MAN TAG TEAM CHAMPIONSHIP: Ryusuke Taguchi, Togi Makabe, & Toru Yano (c) vs. CHAOS (Robbie Eagles, YOSHI-HASHI, & Tomohiro Ishii) vs. LIJ (EVIL, BUSHI, & Shingo Takagi), vs. Suzuki-Gun (Yoshinobu Kanemaru, El Desperado, & Taichi), vs. Bullet Club (Bad Luck Fale, Yujiro Takahashi, & Chase Owens) – The Six-Man Tag Championship is probably the most unnecessary championship in the company. That said, it has usually been defended in a Gauntlet Match at Wrestlekingdom that sees two teams start. When one team is eliminated, another team will take their place. And so on until one team remains. Taguchi’s team has been one of, if not the longest-reigning teams. However, the champions rarely retain in matches like this. Plus, if

Jyushin Thunder Liger & Naoki Sano vs. Ryu Lee & Hiromu Takahashi – With the exception of Takahashi, all of these men have long histories with Liger. It certainly makes sense for men with such a long story to be involved in the end. Plus, Takahashi may be the champion by this time, which would make him the perfect man to get the pin.

REVOLUTION PRO UNDISPUTED BRITISH HEAVYWEIGHT CHAMPIONSHIP: Zack Sabre Jr. (c) vs. SANADA – SANADA and Sabre have had awesome matches with each other, and this one will probably be no exception. As I stated earlier, I think LIJ will be established as the dominant stable by the time the event is over. In order for that to happen, they should win their respective title matches.

IWGP US HEAVYWEIGHT CHAMPIONSHIP: ???? (c) vs. Juice Robinson – Juice was set to have a rematch with Jon Moxley for the title when it was vacated. New Japa rarely does multi-man matches for singles titles. Thus, Juice will face the winner of the title match here so that both men will have had suitable title matches. Since the story started with Moxley beating Juice, the logical ending is Juice winning the title back from Moxley.

NEVER Openweight Championship: KENTA (c) vs. Hirooki Goto – Kenta turning on his mentor Katsoyori Shibata and joining Bullet Club was one of the biggest stories of 2019. Goto has had a renewed vigor after taking a sabbatical to train a New Japan’s LA Dojo with Shibata. It would seem like Goto is fighting for his friend’s honor, since Shibata may not ever be cleared. Both men do well in strong-style matches, so I expect this one to be strong and stiff.

SPECIAL MATCH: Kazuhicka Okada or Kota Ibushi vs. Jay White or Tetsuya Naito – Since the winners of the respective title matches will meet for the Winner Take All main event, the respective opponents will meet in the semi-main event. While this may seem like a Battle Of Losers, it will likely establish who will be the next challenger for one or both titles, and White often makes a comeback after being beaten.

Hiroshi Tanahashi vs. Chris Jericho – A lot of new controversy about this match has surfaced since Tanahashi publicly asked for an AEW Title Match should he beat Jericho. Jericho subsequently agreed publicly to the request. This sparked a lot of fervor with fans, who are seeing it as a sign of New Japan and AEW entering a working agreement. Due to the way The Elite left New Japan a year ago to help form AEW, an alliance has always seemed unlikely. While it’s not impossible, I just don’t see a working agreement happening between the two anytime soon. I see the AEW stipulation as merely something to drum up interest in the match. Nothing more, nothing less.

DOUBLE GOLD DASH: IWGP Heavyweight Champion vs. IWGP Intercontinental Champion – Again, any of these men would make a worthy Double Champion. However, with my theory of LIJ establishing dominance, the best way to do that is for their leader to fulfill his wish and win both titles.

New Year’s Dash usually follows on the heels of WrestleKingdom, and it is where many of the major storylines for the year begin. It will be interesting to see how long the Double Champion will hold on to either title.