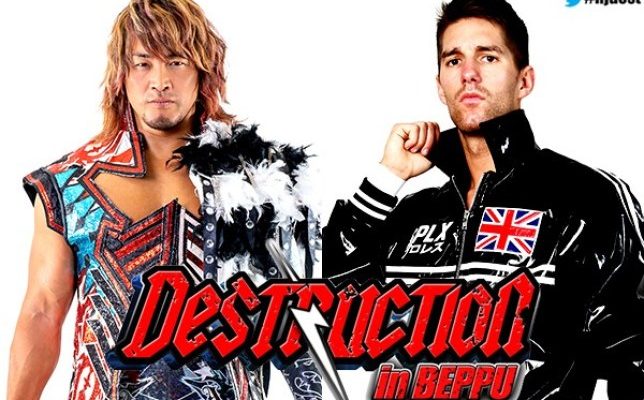 The conclusion to New Japan’s Destruction tour is here, where the winner of the Young Lions Cup will be crowned. There are also several title matches that will set the stage for next month’s King Of Pro Wrestling Tour.

Karl Fredericks s. Yota Tsuji with a Half Crab – Another battle between dojos. A good opening match between the two lions. the story with Karl Fredericks is that he has an arm injury for which he wears the protective gauze. The finish was Tsuji coming off the ropes into a spinebuster. Fredericks then locked in is half crab for the submission

Ryusuke Taguchi, Yuji Nagata, Ren Narita & Yuya Uemera b. Manabu Nakanishi, Toa Henare, Clark Connors, & Michael Richards when Taguchi submitted Richards with the Oh My And Garakle – You read correctly that Mincael Richards is in this match. No, it is not Kraemer. Narita and Richards began. Uemera got cut off and worked over until Narita got the tag. Narita did a VERY impressive bodyslam to Nakanishi before tagging Nagata in. The veterans had a good exchange but things turned around when Taguchi got tagged in. All four opponents teamed on Taguchi. The pinfalls got broken up though. Nagata rallied his side to keep everybody out while Taguchi applied the Ankle Lock to get Richards to submit.

Jyushin Thunder Liger, Sho, & Yoh b/ Suzuki-Gun (Minoru Suzuki, Yoshinobu Kanemaru, & DOKI) when Sho pinned DOKI after a 3K – Of course, the heels attacked before the bell and immediately took the fight to the floor. Everybody brawled through the crowd. When the match finally got back in the ring, they got the heat on Yoh. Liger got the hot tag and ran wild, clearing the ring before motioning to Suzuki. Suzuki tagged in and almost immediately tried to unmask Liger. The two fought to a double-down before tagging out. Sho and Yoh hit the 3K on Doki and got the pin.

After the match, Suzuki continued to go after Liger. He again tried to unmask Liger until some Young Lions came to the ring to break it up. Liger took the mic and challenged Suzuki, only for Suzuki to walk to the back.

Bullet Club (NEVER Openweight Champion KENTA, Bad Luck Fale, Yujiro Takahashi, and IWGP Junior Heavyweight Tag Champions El PHantasmo & Taiji Ishimori) b. IWGP Junior Heavyweight Champion Will Ospreay, Robbie Eagles, Kota Ibushi, Togi Makabe, & Tomoaki Honma) when KENTA pinned Honma with a GTS – Bullet Club rushed at the babyfaces, resulting in a brawl right off th bat. The babyfaces got the shine early on until the heels managed to cut off Eagles. Makabe got the hot tag and ran wild. Kenta and Ibushi tagged in next and kicked each other to a double-down. Honma got the tag but missed a Kokeshi. This put the heels back in control where they ganged up on Honma. The obligatory multi-man brawl broke out where each man hit some of their big moves. KENTA dodged another Kokeshi and hit the GTS on Honma for the pin.

Los Ingobernables De Japon (Shingo Takagi, SANAD, & BUSHI) b. CHAOS (IWGP Heavyweight Champion Kazuchika Okada, Hirooki Goto, & Rocky Romero when SANADA submitted Romero with a Skull End – The babyfaces managed to cut off Bushi until Sanada tagged in and went toe to toe with Okada/ The match went back and forth with Sanada launching Okada up and hitting a Cutter. before applying the Skull End on Romero for the submission.

Los Ingoblernables De Japon (IWGP Intercontinental Champion Tetsuya Nait & EVIL) b. Bullet Club (Jay White & Chase Owens w/Gedo) when Naito pinned Owens with Destino – With both teams being heels it was no surprise the match started with a cheap shot. Bullet Club rushed when Naito and EVIL did a fistbum. However, LIJ soon found themselves in control. They cut off EVIL and worked him over until a double tag out. White and Naito went at it only for White to tag out as soon as the going got rough. Evil hit Darkness Falls on White, effectively taking him out of the match. Naito pointed to White before hitting Destino on Owens and pinning him.

IWGP Heavyweight Tag Champions The Guerrillas Of Destiny (Tama Tonga & Tanga Loa w/Jado) b. Tomohiro Ishii & YOSHI-HASHI of CHAOS when Tonga pinned HASHI with a roll-up – The heels cut off Ishii and worked him over. Ishii kept fighting back only to get beaten back down two-on-one. Yoshi finally got the tag and turned the match around. Ishii and Loa traded dueling strikes. Tonga and Hashi got the double-tag at the 15-minute mark. Hashi somehow managed to kick out of a Magic Killer. GOD lifted Hashi for the Super Powerbomb but Ishii made the save, which allowed Hashi to reverse into a Butterfly Lock. Loa tried to interfere, only for Ishii to get him in a submission as well. Jado broke the pin with his shinai. Hashi countered and knocked Jado out. Ishii delivered his own powerbomb to Tonga but Hashi only got a two-count. KENTA made his way to the ring and distracted Hashi, Tonga managed to then pin Hashi with the most danfgerous move in all of sports-entertainment, the roll-up.